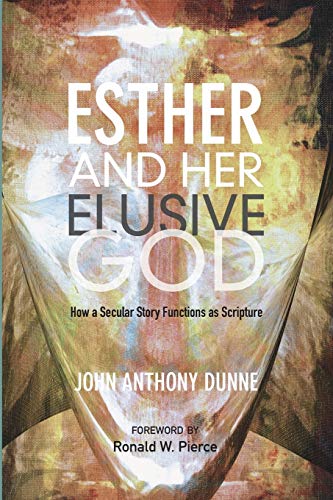 Esther and Her Elusive God: How a Secular Story Functions as Scripture

Esther and Mordecai: heroes or villains? Were they models of piety and faithfulness, or did they assimilate into their cultural context? Should we emulate their character and their response to the pagan Persian culture they were forced to live in? Or, is this a life they chose?

Even asking the question seems absurd for most Bible readers. However, John Anthony Dunne argues that the story of Esther is a “secular story” that portrays its main characters in a much more negative light than is often thought. Dunne is currently pursuing a doctorate on Paul’s understanding of suffering in the book of Galatians. In his spare time, he wrote a book on Esther (pp. xi–xii).

In Part One, Dunne discusses Esther as “a secular story” by outlining the ways in which Esther and Mordecai have assimilated into Persian culture (ch. 1) and essentially neglected their Jewish religious heritage (ch. 2). In the Greek translations of the story, oftentimes these very details are modified in order to portray the characters in a more positive and faithful way (ch. 3). In Part Two, Dunne reflects on the role that Esther plays in the canon (ch. 4) and in the church (ch. 5). In these last chapters, Dunne seeks to show the effect that Esther’s unique narrative has had on readers.

Unsatisfied with the way Esther is often presented, Dunne aims “to provide the church with an alternative to the popular understanding of the story” (p. xi). To explain, Dunne outlines the standard take on Esther’s story: “God remains hidden in the story, never mentioned of course, but many believe his presence is implied, assumed, suggested, or (paradoxically) emphasized on every page” (p. 1). To this interpretation, Dunne counters, “Yet does such an approach really do justice to the story?” (p. 1). For him, the dominant interpretation of Esther is “much more in line with the later Greek translations of the story than the original Hebrew” (p. xi). Arguing that Esther is “the chief narrative of the Old Testament in terms of literary skill, story-telling, and subtlety,” Dunne works with “the assumption that Esther is a misunderstood story” (p. 3).

He explains that the oddities of the Esther narrative are either “neglected” or “adjusted.” The heart of Dunne’s characterization of the book is that “the typical view of Esther and Mordecai fails to account for a number of important factors” (p. 17). These factors include the omission of any mention of God, the lack of concern for the land of Israel, and the very different religious vocabulary used by the characters. Further, Esther and Mordecai seem to be presented as ethnic Jews who are not particularly connected to the religious elements of Judaism. An experienced reader of the OT will immediately sense a difference in style and content when reading the book of Esther.

Dunne’s explanation for these oddities is that “Esther is a secular story,” in the sense that “the people of God portrayed in Esther appear to have experienced a decline in faith and religious adherence to the God of their ancestors” (p. 3). For Dunne, this effect is due ultimately “to the result of assimilation, the undoing of Israel’s commission to be ‘set apart’ from the nations” (p. 3, emphasis original). The missing pieces of Esther (God’s name, prayer, etc.) all point toward “the secularity and assimilation of God’s people. And yet, this unfaithful people experienced such an incredible deliverance—attended by multiple ‘coincidences’—that we will ultimately be led to conclude that the elusive God of Esther was steadfast and faithful, preserving his people though they did not deserve it” (pp. 4–5).

Dunne here attempts a difficult task. He wants to engage the reception history of Esther at the academic level, but he also wants to translate these findings for a broad audience. In this vein, he succeeds in writing a brief and accessible entry point into this approach to Esther’s narrative (the main text is only 130 pages). While engaging in text-critical details in one chapter, he analyzes VeggieTales and the ordering principles behind the Chronicles of Narnia in the next. This results in a readable book that will allow a broad audience to encounter his provocative analysis.

Negative judgment of the book of Esther or its characters is not necessarily novel. Historical-critical scholars typically deny the historicity of the book, question the details and plausibility of the narrative elements, or conclude that the book is a work of fiction designed to function completely outside the context of the canon. Dunne does not focus on these types of arguments (e.g., he opts not to comment on the historicity question [pp. 5–7]). His primary purpose is to investigate the narrative itself and grapple with the way it has been received (and modified!) by its readers.

In analyzing this reception history, though, Dunne perhaps overplays the notion of Esther being a “secular story.” Dunne asks throughout the book how a “secular story” like Esther could “function as Scripture.” Some places he calls it a “seemingly secular story” (p. 11). Most of the book, though, builds a “cumulative case for the assimilation and secularity of the characters” (p. 11, emphasis added). More direct reflection on the hermeneutical difference between the secularity of the characters and the secularity of the author’s narrative would clarify the nature of Dunne’s arguments. He has shown that the figures Esther and Mordecai are presented as secularized Jews living in a foreign land. However, the case remains to be made that the Esther narrative is itself a “secular story.”

One of the reasons this distinction is necessary is because it will affect how one perceives and handles the book of Esther as a whole. For instance, in the chapter on “Esther & The Canon” (pp. 95–110), Dunne asks, what place does it have in the canon, given the secularity of the story? This way of raising the question, though, only highlights the above-mentioned definitional issue. In other words, a pressing question is: in what way is the story secular? If the secular portrayal of the characters is a feature of the author’s compositional strategy, then the narrative (story) itself should not necessarily be classified as secular. The primary reason that sensitive readers of the book experience unease at the story (as evidenced by the neglect or adjustment mentioned above) is precisely because the biblical author has guided them down this path. For example, we would not know that Esther and Mordecai were forgetting Passover unless it was shown to us at strategic moments in the narrative. To give another example, the author himself is the one who casts Mordecai in the guise of Haman at the end of the story. The author has strategically selected these elements in order to produce this effect on readers.

As Dunne notes, the critique of Esther and Mordecai is implicit and skillfully done. Noting this aspect of the narrative prompts the question: How would we know that they are “secular” except for the compositional strategy and the canonical context within which we encounter the book? Is it also possible that the canonical context itself is what allows us to see the surprising secularity of Esther and Mordecai in its starkest contrast (i.e., the book’s relationship to Daniel and Ezra-Nehemiah)? Thus, it seems possible to affirm the core of Dunne’s insights into Esther’s narrative while maintaining the hermeneutical impact of its location within the Hebrew Bible.

Because the option of ignoring or downplaying the oddities and difficulties of Esther is inadequate, those who disagree in part or on the whole with Dunne’s take on the book will need to offer alternative explanations that deal adequately with the narrative’s textual realities.