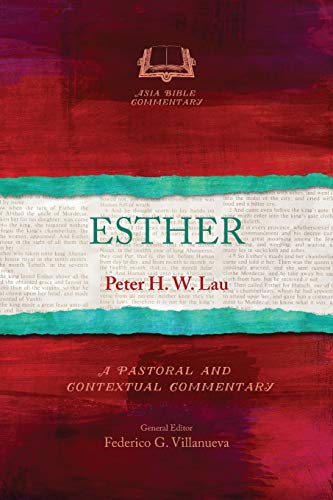 Esther: A Pastoral and Contextual Commentary

The Asia Bible Commentary series (ABC) responds to “one of the greatest shifts in the history of world Christianity,” from a concentration of Christians in the West to the global distribution of Christians (p. xi). The series addresses the need for believers “to interpret the Bible for their particular contexts” (p. xi) by honoring the historical-critical aspect of biblical interpretation as well as the particular social locations of the commentators and readers. Every commentary in the series reads a specific biblical book from an Asian context, and then applies its messages in that context. Peter Lau’s book on Esther follows this broad vision.

As the book’s subtitle states, this commentary is written from a pastoral and contextual perspective. Its interpretation therefore follows the evangelical tradition by acknowledging the authority of both the Old Testament and the New Testament as well as reading and applying Esther in the author’s cultural context, namely the Chinese-Malaysian context, mixed with a Chinese-Australian context.

As Lau says in the book’s ten-page introduction, the commentary functions as a “tour guide” (p. 1). It first introduces the context of Persia and then moves on to Esther’s place in the canon, followed by reading Esther through an Asian lens. Lau highlights three primary intersections between Esther and Asia: the literary absence of God in Esther, the feasting motif, and faithful living in the diaspora. In accord with the evangelical reading, Lau perceives the literary absence of God in Esther as God working behind the scenes. He thinks that this hiddenness parallels the phenomenon in most Asian countries where superstitions and belief in providence seep into all areas of life. The feasting motif parallels the importance of feasting and eating in Asian cultures. There is also the parallel between Jewish people living in Persia and Christians living in Asia. Issues of non-Christian leaders and anti-Christian government and democracy are all part of the political climate in Asia.

Lau then exegetes Esther chapter-by-chapter and paragraph-by-paragraph, elucidating the meaning of each scene in its original Persian context, while interweaving this with the Chinese-Malaysian-Australian contexts. For example, Lau connects the king’s feast in Esther 1 to Malaysians’ love for and focus on food. He points out that for Malaysians, eating up to six times a day is not unusual (p. 12). He describes Haman’s proposal to exterminate the Jewish race as comparable to “the Nine kinship Exterminations” in ancient China (p. 37). Sometimes, Lau uses Chinese proverbs or Malaysian expressions to illustrate a point he makes about Esther (pp. 42, 81), and this certainly resonates with those who come from or understand the Chinese context. Other times, he associates the Australian context with Esther, for instance, comparing Remembrance Day in Australia to the Festival of Purim in Esther (p. 115).

Throughout the commentary, Lau employs vivid images and accessible language. Sometimes, he also uses humor to describe the characters, which befits the writing style of Esther. For example, he describes Haman’s downfall in Esther 6 by saying that “it was the size of his head that toppled him” (p. 72). He also draws attention to the many word plays in Hebrew, such as the word “fall” (נפל) in Esther 3:7, 6:10 and 6:13 (pp. 76, 84) and “rest” (נוח) in Esther 3:8 and 9:22 (p. 117), and this is helpful to show the literary artistry of the author of Esther.

Another distinction of Lau’s commentary is that he always relates the scenes in Esther to the New Testament and to Jesus, which reflects the “pastoral” side of the book. Such commentary preachers and pastors are likely to find particularly helpful for their preaching.

While the literary, historical, and theological insights in this book align with other commentaries such as commentaries by Frederick Bush, Adele Berlin, Karen Jobes, and Debra Reid, it is the Chinese-Malaysian-Australian contexts Lau brings to the text and their interaction with Esther that define and set this book apart from others. As far as the vision of the ABC series goes, the book accomplishes what it intends to do. Although more could be done in regard to the wisdom element in Esther and to interact with scholars who do not see the hidden hand of God at work in Esther, this book contributes insightfully to the literature on Esther with its pastoral as well as contextual reading.