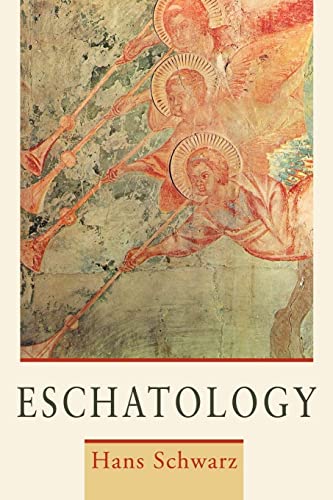 For this German Lutheran professor of theology eschatology is ‘Christian reflection on the end of our lives and of the world in general’. This scope is broad enough to include both theological thought and secularist futurology which asks what is going to happen to the material world that we know.

An introductory chapter asks whether people still care about the future and argues briefly for the bankruptcy of secular thinking on the matter.

The biblical material is investigated developmentally, looking at views of human destiny, the concept of future judgement by God and the growth of the messianic hope. In the NT attention is centred on the eschatology of Jesus and the Evangelists, Paul and some of the early church writers. This discussion is principally on the coming of the Kingdom and the Messiah. There is some repetition of it in the ensuing survey of modern theologians from A. Ritschl onwards, including figures such as M. Borg and A.A. Hoekema and the expected scholars (C.H. Dodd, O. Cullmann, J. Moltmann and J. Hick), liberation and feminist theologians. It concludes without any attempt at synthesis or evaluation.

The discussion changes key as the author looks at secular understandings of the future from the nineteenth century onwards, noting the views of scientific materialists and evolutionists, the danger of an ecological holocaust and the contributions of philosophers, New Age religion and secular humanism. This is a digression from the main theme of the book, since little account is taken of it later on. What is important here is Schwarz’s exposure of the way in which secularists do not take the fact of sin with anything like sufficient seriousness.

In his own contribution to the discussion Schwarz begins with the problem of death which is to be seen as the gateway to the eschaton. He considers the question of immortality, including the evidence of near-death experiences and philosophical considerations, before noting that immortality is a gift of God rather than an innate quality; consequently our only hope for ultimately fulfilment lies in a resurrection hope based on Christ’s resurrection. This raises the question of what lies between death and resurrection, which is solved by arguing for the timelessness of the divine sphere.

Schwarz moves on to controversial areas of hope: he firmly rejects what he calls ‘travelogue eschatology’ with its timetables and sees the concept of a millennium as a ‘pastoral comfort’. He discusses the idea of universal salvation sympathetically, concluding that it is something for which we should hope but certainly cannot affirm; in any case people can be saved ‘only for Christ’s sake’ (351). He is more dismissive of purgatory. Finally, he considers ‘the new world to come’, argues that the signs of the end (like the Antichrist) are being fulfilled now, and the church is called to anticipate the new world proleptically in its own life. He strongly defends the fact of final judgement as the prerequisite to salvation, and says that it has a twofold outcome. There is a brief discussion of heaven and somewhat less of hell.

The reader will learn a lot from this book with encyclopaedic knowledge of Bible, theology and secular thought. Unfortunately it attempts to do too much and leaves the reader dissatisfied. Thus, for example, there is no proper NT basis for the discussion of the post-mortem state. The topics discussed in the biblical section are not those taken up in the later, systematic section. The helpful discussion of futurology doesn’t lead to any real consideration of the relationship between secular hopes and possibilities and Christian doctrine. The survey of evangelical positions on the millennium is too brief to be helpful. The nature of hell is virtually untouched, although the very brief statement that the various biblical descriptions contain words ‘taken from present negative experiences and attempt to transcend them’ (402) maybe says it all. The general outlook of the book is on the conservative and evangelical side, and it is useful to have the perspective of a Contintental theologian of a Lutheran persuasion on a discussion largely been carried on in North America. But what should be the evangelical attitude to universal homecoming? I have always believed that there will be people who are finally lost and that therefore there is no point in hoping that there might possibly be a universal homecoming, although there is point in praying for the conversion of as many people as possible so that the population of hell will be as minimal as possible. But how can I pray that hell will in fact be empty, when Scripture plainly implies that there will be those on the right and on the left when the Son of Man sits in judgement? Should we not rather be doing much more than we are doing to bring the gospel to those who are in danger of being eternally lost?