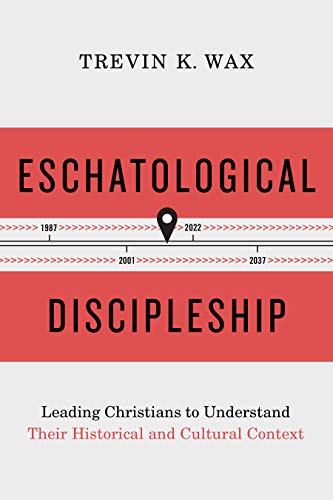 In the silos we are comfortable occupying, discipleship is a subject for popular devotion, disciple-making is a topic for missiologists and church-growth authors, eschatology is explored (in quite different ways) by systematic theologians and New Testament scholars, and the question of how worldview informs identity and morality is something we leave to the ethicists and philosophers.

How refreshing it is, then, to join Trevin Wax in his exploration of why and how these various aspects of Christian thought belong together. Wax’s essential point is that the New Testament portrayal of Christian identity and moral action (individually and corporately) is profoundly eschatological, and that this has important implications for contemporary mission-oriented discipleship, particularly in view of the powerful rival eschatologies that shape our culture.

Wax’s argument unfolds in four sections. He begins by defining terms. By “discipleship” he means an integrated, holistic form of life that responds to Christ in belief and practice, in affection and knowledge, in outward witness and inward transformation. In particular, he sees discipleship as being worldview oriented—that is, as springing from a comprehensive, storied view of reality that shapes our thinking and life. Following N. T. Wright, he suggests that one of the important functions of a worldview is to answer the question “What time is it?”—that is, to locate us in the cultural and historical moment we occupy, in relation to a past and a future.

This provides Wax with a link to eschatology. Christianity has a powerful answer to the “What time is it?” question, one that encompasses God’s grand plan for human history, culminating in the death, resurrection and return of Christ. “Eschatology” in this broader sense concerns not just the end times, but our current historical existence that leans forward to that final consummation and is shaped by it. Thus “eschatological discipleship” is a form of spiritual formation that “seeks to instill wisdom regarding the contemporary setting in which Christians find themselves (in contrast to rival conceptions of time and progress) and that calls for contextualized obedience as a demonstration of the Christian belief that the biblical account of the world’s past, present and future is true” (p. 41).

Part 2 of the book grounds this contention in Scripture. After a very brief survey of Old Testament precedents, Wax outlines how the picture of discipleship in the Gospels is consistently oriented towards a coming future kingdom, not only in the teaching and parables of Jesus but in his commissioning of the disciples to “make disciples” of the nations. He likewise show that the Pauline view of the Christian life is consistently grounded in future realities that are experienced or anticipated now in this present evil age—whether in living as children of the light (1 Thess 5:1–11), doing away with the current deeds of darkness (Rom 13:11–14), living as colonial citizens of a heavenly kingdom (Phil 3:20), or putting on now the life of Christ’s kingdom that is coming (Col 3:1–11).

Part 3 helpfully contrasts the biblical eschatology that Wax has constructed with three alternative eschatologies that dominate our current context, and with which we need to engage if discipleship is to be faithful (both in terms of missionally confronting these rival views and in ensuring that they do not contaminate or distort our discipleship). Wax looks in turn at (1) the enlightenment eschatology of human technological progress, (2) the emancipatory eschatology of the sexual revolution, and (3) the consumer society’s quest for personal fulfilment through acquisition and personal branding. In each case, Wax deftly highlights how these dominant secular eschatologies tell a very different story from the Christian one, and how faithful discipleship involves a missionary engagement with them.

The fourth and final section of the book considers how “eschatological discipleship” relates to three streams within contemporary evangelical thinking about the Christian life: (1) discipleship as evangelistic reproduction (disciples-making-disciples); (2) discipleship as personal spiritual discipline (in the Dallas Willard style); and (3) discipleship as a gospel-centered, gospel-motivated life. Wax provides insightful suggestions as to how each of these valid emphases could be clarified and strengthened by an appreciation of the fundamentally eschatological shape of Christian existence.

Wax’s presentation is well-written and well-argued. He succeeds in bringing together these two subjects that are so often found together in the New Testament (our “discipleship” and the eschatological shape of the gospel). In so doing, Wax not only corrects common imbalances in contemporary thinking about the Christian life but also provides a fresh perspective for thinking about missionary engagement with our culture. He also commendably interacts with significant scholars from across the disciplines—from biblical studies (e.g., N. T. Wright), systematic theology (e.g., Kevin Vanhoozer) and ethics (e.g., Oliver O’Donovan).

It is inevitable in such a wide-ranging and multi-disciplinary work as this one to notice subjects or texts that could have received more attention, or in which the emphasis could have been different. For example, I personally would have liked Wax to run harder and further with the idea of “learning” as the conceptual centre of what it means to be a “disciple” (μαθητής) in the Gospels and Acts, and I finished the biblical section thinking how useful it would have been also to explore the eschatological nature of Christian discipleship in Hebrews, 2 Peter and Revelation. Theologically, I would have loved Wax to address explicitly the connection between the eschatological blessings of the next age and their realization in this current age (an issue often expressed these days in terms of the degree of continuity between this creation and the new creation). This is a much-contested question, and could easily have hijacked the agenda of the work. However, where one lands on this issue does have a massive impact on what discipleship looks like—in mission, in apologetics, in socio-political engagement and in obedient living. From the assessments he draws at various points, Wax seems to inhabit the kind of optimistic amillennialism characteristic (in different ways) of N. T. Wright and Tim Keller (he quotes with favor Michael Bird’s view that “the seeds of the new creation have already begun budding in the old garden,” pp. 87–88). A more explicit engagement with this question would have clarified and bolstered the practical conclusions of parts 3 and 4 (especially for those of us who occupy a slightly different location on the realized eschatology spectrum).

All the same, finishing a book stimulated and wanting more is a compliment rather than a criticism. Wax has done us a real service by arguing so cogently that Christian discipleship is intrinsically eschatological, and that Christian eschatology is inescapably practical and directive for our life and mission now.