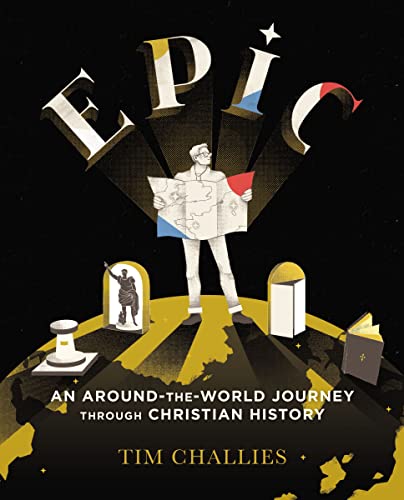 At a time when the COVID pandemic has limited world travel, Tim Challies’s Epic: An Around-the-World Journey through Christian History provides readers with the kind of vicarious journey through church history that few men or women are privileged to experience even in ideal circumstances. Most popularly known for his blog (www.challies.com), Challies has a broad audience in mind, as indicated by the video documentary that complements the book. Epic’s focus is on “original, historical artifacts” that Challies believes are significant for lay Christian readers to have familiarity. Not intended as a professional historian’s critical account of church history that relies on archaeological or archival research, the book nonetheless seeks to avoid items found in museums and monuments that postdate a person or event (p. 9).

In many ways, Epic is a 21st-century Protestant pilgrimage that is experientially and existentially significant for Challies, though not sacramental in the formal sense. The book is likewise pastoral, with exhortations and encouragements interwoven throughout its 33 short chapters. Totaling 175 pages, the text follows a chronological rather than geographical sequence that begins with Augustus of Prima Porta and ends with the YouVersion Bible App. Epic’s brisk pace mirrors the author’s travels around the world, which feature the frustrations of inaccessible sites and inevitable language barriers. The featured item of each respective chapter is embedded in one or more pages that contain background information and commentary by Challies himself.

Like most popular works of history presented from a Protestant perspective, little attention is given to the Medieval period. With the exception of the Book of Kells (9th century), no artifacts are mentioned between the 4th and the 15th centuries. If Epic is not a work of academic history, Challies does provide judicious historical judgments. In chapter 16, “William Brewster’s Chest,” the author resists any theocratic temptation, acknowledging that “it may be difficult to argue that America is or was a truly Christian nation” (p. 84).

In chapter 24, which focuses on the “Slave Bible,” Challies comments that “it’s a story that warns us of the dangers of compromising the message of the gospel to accommodate our sin … a reminder that sinful humans can use good things—even the precious Word of God—to commit great evil” (p. 118). That a redacted Bible was commissioned in the 19th century to uphold chattel slavery is an uncomfortable but salutary lesson for contemporary Christians. In balancing the picture, Challies notes that William Wilberforce (p. 108–11) and David Livingstone (p. 125–29) actively opposed African slavery in their respective contexts.

Challies examines items from recognizable figures such as William Tyndale and John Calvin but also cites obscure examples. The 18th century Huguenot Marie Durand, who was imprisoned for nearly 40 years, is the focus of chapter 18 (p. 89–93). In addition to Durand, Challies features women such as Selina Hastings, Countess of Huntingdon (1707–1790), who was an influential supporter of evangelicalism in Britain. The African American Congregationalist preacher Lemuel Haynes (1753–1833), later coined the “black Puritan,” and the Methodist Josiah Henson (1789–1883), whose autobiography formed the basis for “Uncle Tom” in Harriet Beecher Stowe’s Uncle Tom’s Cabin (p. 122–124) are both mentioned.

For global Christianity in the last century, Challies focuses on influential evangelists such as Billy Graham and Oral Roberts, noting the latter’s role in the genesis of the prosperity gospel as a global phenomenon. In addition to missionaries Amy Carmichael (p. 130–34) and the five men martyred by the Huaorani tribesmen in 1956 (p. 156–60), Challies devotes space to the Paapallacta Dam in Ecuador, a hydroelectric project completed in 1971 whose energy enabled a radio ministry to flourish that has reached millions of hearers over 50 years (p. 147–50).

Because of succinct chapters, topical arrangements, and vivid images, Epic can be a helpful introduction to church history for teens. Culturally and theologically sensitive, the book nevertheless avoids the kind of detached false humility that can characterize modern discourse on Christian history. Like any journey, a traveler discovers what is good as well as bad. Whether a Christian will benefit from such knowledge depends on other considerations. Nonetheless, Epic behooves a reader to be faithful to Christ in the present, a time which, in Challies own words, is “filled with promise and possibility” (p. 167).