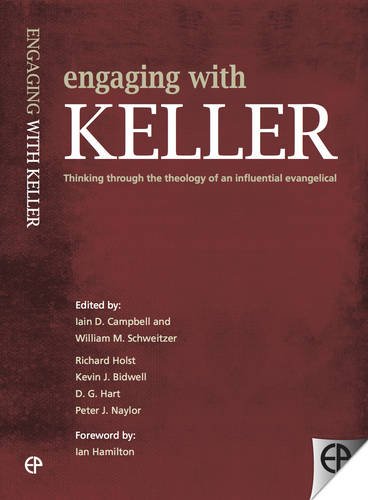 Engaging with Keller: Thinking Through the Theology of an Influential Evangelical

Engaging With Keller consists of a number of essays appraising Tim Keller’s views on sin, hell, the Trinity, the mission of the church, hermeneutics, creation, and ecclesiology. The authors are all from conservative Presbyterian denominations, and the majority of them are ministers in the UK. They acknowledge that Keller intends to teach orthodox truth, but express concern that in his desire to make Christianity relevant to a contemporary audience he has inadvertently softened some aspects of biblical teaching (pp. 17, 239).

Those who are indebted to Keller’s ministry influence (such as myself) should be especially open to such criticisms. After all, no minister or ministry is perfect, and criticism can be an important means for helping us grow and see our blind spots. And even where the book might not amount to a successful criticism of Keller himself, it could still offer some helpful cautions to younger Keller enthusiasts who latch on to their teacher’s ministry emphases but may or may not imitate his humility and nuance. Unfortunately, however, Engaging with Keller does not provide a fair and helpful criticism of Keller’s thought and ministry. In the space of this review, I can focus only on a few key issues that may represent larger weaknesses in the book’s approach.

First, at times the authors appear to misrepresent Keller’s viewpoint. For example, in the book’s opening chapter on Keller’s doctrine of sin, Iain Campbell faults Keller for portraying sin as identity, idolatry, lostness, and self-centeredness, rather than disobedience. He especially objects to Keller’s emphasis on the motif of idolatry, asserting that “the nature of sin is not idol-making but law-breaking” (p. 44). Campbell acknowledges that idolatry is not merely an OT problem, but claims it is the symptom of sin, not its cause. It is debatable whether our language for sin should be as exclusively legal as Campbell seems to think and whether idolatry can be reduced to a mere symptom of sin. I wonder if Campbell is forcing a false dichotomy between two equally valid and biblical images for sin. But whether this is true or not, Campbell certainly misrepresents Keller by positing a denial of sin as law-breaking in Keller’s teaching. At a few points in his chapter Campbell seems to recognize that Keller never sets the relational dimension of sin over and against the legal, and at one point even quotes Keller’s affirmation of sin as law-breaking (p. 60). But he then proceeds to lament that if Keller had explicated his doctrine of sin on the Bible, he “would not have been so quick to dismiss a definition of sin as a breaking of God’s rules” (p. 38), and later he asserts that Keller has “dismissed defining sin as disobedience” (p. 39). It is hard not to feel a sense of unfairness here, since Keller himself affirms idolatry and disobedience as complementary, rather than competitive, aspects of a biblical doctrine of sin.

Some others chapters, while not blatantly misrepresenting Keller’s teaching, may provide a measure of distortion by overlooking important nuances in his thinking or failing to consider all that he has said on a given subject. Peter Naylor, for instance, critiques Keller for advocating a dual mission in the church of gospel preaching plus doing justice. But he exhibits no awareness that Keller has actually argued against John Stott’s equal emphasis on word and deed ministry, and instead posits “an asymmetrical, inseparable relationship” in which gospel proclamation has priority in the mission of the church (see Timothy Keller, “The Gospel and the Poor,” Themelios 33:3 [2008]: 8–22, available at http://thegospelcoalition.org/themelios/article/the_gospel_and_the_poor). As a result, many of Naylor’s specific criticisms seem to be targeting a simplified and slightly caricatured version of Keller’s actual missiology.

Similarly, Kevin Bidwell takes issue with Keller’s metaphor of a “divine dance” in his treatment of the Trinity, but he treats this metaphor as if it were a central and comprehensive representation of Keller’s view on Trinitarian relations. For instance, he sets it at odds with generation and spiration (pp. 115, 118) and claims that it jeopardizes the unity of the Godhead (p. 113) and even raises the question of tritheism (p. 120). But surely there is some category confusion here: Keller does not offer the metaphor as an alternative to the divine relations espoused in, say, the Athanasian Creed. In fact, it is not at all clear that Keller places the kind of controlling emphasis on this particular metaphor that Bidwell’s critique implies. It is simply one metaphor, raised here and there in Keller’s many writings, intended to make a point about the effect of Trinitarian relations—not a final statement on the relations themselves. Bidwell faults the “divine dance” metaphor because it is not explicitly located in the Bible. But since our theological metaphors and language are often not explicitly grounded in the Bible (e.g., the very word “Trinity”), a fairer test would be to ask whether what is pictured in the metaphor is consistent with the Bible.

Bidwell would have had a firmer basis for his critique if he had consulted all of Keller’s teaching on the Trinity—for instance, he might have given some attention to the statement issued from Keller and D. A. Carson regarding T. D. Jakes’s Trinitarianism after his invitation to the Elephant Room (see D. A. Carson and Timothy Keller, “Carson and Keller on Jakes and the Elephant Room,” The Gospel Coalition Blog, February 3, 2012, available at http://thegospelcoalition.org/blogs/tgc/2012/02/03/carson-and-keller-on-jakes-and-the-elephant-room/). A quick read through the first section of this statement reveals how much more Keller has to say about the Trinity than is expressed in the divine dance metaphor. Evaluating Keller’s Trinitarianism exclusively through this one metaphor seems comparable to evaluating Calvin’s doctrine of revelation exclusively through his metaphor of God “lisping” to us in the Institutes 1.13.1 to express the notion of accommodation.

Another overarching weakness of Engaging with Keller is that it often fails to sufficiently appreciate the concerns that undergird Keller’s teaching in a particular area. For instance, in his chapter on Keller’s doctrine of creation, William Schweitzer criticizes Keller for seeking to accommodate a biblical doctrine of creation with the findings of modern science. Schweitzer argues that rejection, rather than accommodation, should characterize the church’s reaction to claims from the scientific community, because “the world is going to oppose God’s truth” (p. 97). Of course, Keller would agree that some scientific claims should not be accommodated (hence his rejection of full-blown evolution and his affirmation of a historic Adam and Eve). Schweitzer’s own position on creation issues is often left unclear (is he a young-earth or old-earth creationist?), but surely he would acknowledge that not all scientific claims should be rejected (e.g., heliocentrism). His chapter would have been more compelling if he had sought to distinguish between scientific claims that should be rejected and those that should be accommodated, on the basis of an analysis of the evidence. In this case, that might include, for instance, some discussion of homologous traits, genetic similarities, fossil distribution, etc. Instead, he seems to simply assume that all those points of data explored by Keller are among those to be rejected.

The most strident chapter in the book is Daryl Hart’s concluding piece on Keller’s ecclesiology. Throughout this chapter, Hart faults Keller—as well as The Gospel Coalition (p. 223) and the Presbyterian Church in America (p. 225)—for collaborating across denominational lines. For Hart, such collaboration represents a compromise of Presbyterianism, which requires not only “ministry under the oversight of elders in graded courts” but also “restricting ecumenical ties to communions of like faith and practice (Presbyterian and Reformed)” (pp. 211–12). Hart is certainly entitled to believe that being Presbyterian requires such denominational separatism (though I think even most Presbyterians will find such a view too restrictive). But it would have been a far more illuminating piece if he had erected an argument for why Presbyterianism forbids one from trans-denominational partnership. This view appears to be assumed throughout his chapter, rather than demonstrated, despite being the linchpin of his critique.

This makes all the more striking the severity of Hart’s conclusions. According to Hart, Keller is indifferent to the doctrine of the church (p. 232), does not think church membership matters (p. 213), and exhibits a disregard for Presbyterian norms that is “well-nigh remarkable” (p. 228, cf. also p. 237). He even suggests that by seeking trans-denominational partnerships, Keller has betrayed his ordination vows in the PCA: “although Keller has subscribed the confession of faith, approved Presbyterian polity as the teaching of Scripture, and vowed to submit to his fellow officers in the PCA, his involvement with non-Presbyterians betrays his profession” (p. 235). If Hart had provided some kind of historical and/or biblical argumentation for why Presbyterianism forbids collaboration with non-Presbyterians, his piece would have been, if still controversial and uncompromising, at least more understandable and interesting.

Ultimately, Engaging with Keller fails to produce a compelling interpretation of Keller’s thought. It may benefit its readers by sparking important conversations about issues in contemporary evangelical ministry, such as the influence (to take one example) of C. S. Lewis’s The Great Divorce on our doctrine of hell. But its unfair representation of Keller, failure to appreciate his concerns, and tendency to assume its conclusions prohibits it from being a reliable guide through the issues it raises.