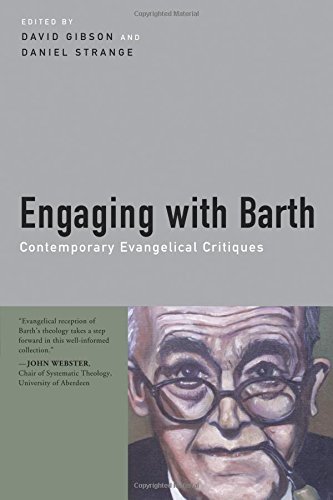 One of my earliest encounters with Karl Barth was being warned by an older Christian that he taught that the Bible only ‘contained’ the Word of God. A few years later another Christian friend told me that he had discovered that Barth was ‘ok’ since he had come across a quote in which Barth affirmed that the Bible was indeed ‘the Word of God.’ As Carl Trueman notes in the foreword to this volume, evangelicals seem to swing between ‘infatuation’ with Barth on one side to ‘the kind of caricaturing that serves to do nothing other than break the Ninth Commandment’ (p. 15) on the other.

Particularly for evangelicals who find themselves studying in the strange world of the secular biblical studies department, Barth so often seems like a breath of fresh air in contrast to the stale atmosphere of radical criticism. Here is a theologian who embraces the importance of Scripture, the sovereignty of God, and the centrality of Christ. However, the starkness of the contrast between Barth and ‘liberal’ scholarship can all too easily blind us to important differences between Barth and classical evangelicalism. The editors note that their aim is to challenge the view that Barth’s theology is the ‘most compelling account of orthodox, and indeed Reformed, post-Kantian Christianity’ (p. 19).

At the same time, the contributors seek to avoid the trap of caricature. There is a recognition that Barth’s position as one of the most significant theologians of the twentieth century warrants careful listening and engagement. Precisely where we disagree with him, as Trueman notes, we can have our thinking clarified and strengthened. However, too often evangelicals offer shallow critiques of Barth. In the long run these can be more harmful because once they are shown to be superficial, genuinely problematic aspects of Barth’s theology can be inadvertently rehabilitated.

The essays in this book can be grouped into those which deal with Barth’s methodology, those dealing with his relationship to historic Reformed theology, and those examining specific theological issues in Barth. Henri Blocher examines Barth’s Christocentric method with its resultant tendency to rationalize evil. Sebastian Rehnman evaluates Barth’s rejection of the law of noncontradiction and concludes that this cannot fail to bring into question the truthfulness of Christianity. Ryan Glomsrud argues that Barth’s engagement with Reformed theology was substantially filtered through nineteenth-century misreadings of that tradition. A. T. B McGowan assesses Barth’s use of the covenant-concept in his theology and argues that he has ultimately failed to ground his theology in the redemptive-historical context of Scripture. David Gibson’s excellent chapter looks at Barth’s doctrine of election through the lens of Romans 9–11. He shows that all too often where Barth argues for christological reference in the text he is actually making a christological inference and, as such, is in danger of totalizing the text in such a way that the ‘complementary but distinct aspects of the biblical witness’ are drowned out (p. 167). Mark Thompson deals with the crucial question of Barth’s understanding of Scripture. Thompson’s detailed critique is especially helpful given the context of his genuine appreciation of the positives in Barth’s doctrine of Scripture. Mike Ovey explores Barth’s Trinitarian theology and particularly its problematic commitment to the idea of a single divine subject. Garry Williams offers a devastating critique of Barth’s view of the atonement. Not only is his understanding of the atonement deeply contradictory, Barth’s ‘weakening of any emphasis on history or eternity’ (p. 271) leads to a Christ who ‘is at decisive moments an abstracted and enforced principle rather than the Christ of the Scriptures’ (p. 272). Paul Helm argues that rather than presenting the visibility of God, Barth’s presentation eventually postulates a hidden God. Oliver Crisp examines Barth’s understanding of reprobation in the light of Jonathan Edwards’s account. Donald Macleod evaluates Barth’s attempt to provide a theology for the church. Finally, Michael Horton provides a summary essay evaluating Barth’s relationship to evangelical theology and concludes the book by noting that Confessional Reformed Christians have much to learn from Barth but where the latter diverges from the former, he ‘represents a declension rather than a renewal of the great Reformation legacy’ (p. 381).

In short, this book fulfils its goal of providing a robust and fair interaction with Barth across a number of important theological topics. As such, Engaging with Barth deserves the widest possible reading. Even those of us who may not come into direct contact with Barth need to realise that his influence is increasingly being felt in evangelical circles. As many of the authors point out, this is not entirely a bad thing considering the alternatives of liberalism or the rootless, popular distortions of evangelicalism that are so prevalent. Barth, at the very least, provides a God-centred theology that opposes the dominantly anthropocentric outlook of contemporary Christianity. Readers who work through the essays in this book, even if they have no prior interest in Barth himself, will benefit immensely from having to engage with serious theology operating at a deep level. However, for those readers who do regularly encounter Barth and are perhaps tempted to embrace him uncritically, this book is an important prophylactic. As a number of the authors point out, to follow Barth where he diverges from classical evangelical doctrine is fraught with danger.

Peter Orr lectures in New Testament at Melbourne School of Theology in Melbourne, Australia. His PhD dissertation is Christ Absent and Present: A Study in Pauline Christology (Durham University, 2011).