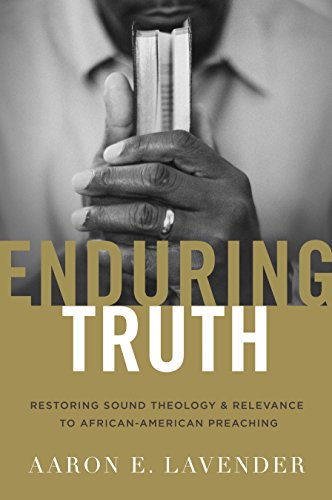 In a manner unique among churches in the United States, preaching is the hallmark of worship in the African American church. Tracing its roots to the African griot, with oratorical creativity, poetry, musical intonations, lament, and celebration, African American preaching (a.k.a. Black preaching) holds an instrumental place in the survival and success of African Americans. Vast numbers of African Americans find solace, hope, salvation, and demands for justice in their preachers’ ability to lift the biblical text into the oppressive social dilemmas caused by racial injustice.

In the last half-century or more, evangelicals as a whole have greeted Black preaching with a long handshake. The association of this mode of preaching with theologically liberal personalities and institutions, its emphasis on social justice, and its call for liberation of an oppressed people make it suspect of being less than biblical preaching and/or gospel-centered preaching. If one compares Black preaching to the content and style of the traditional preaching in pulpits of those trained in the wake of Haddon Robinson’s Biblical Preaching: The Development and Delivery of Expository Messages (Grand Rapids: Baker, 2014), it might leave some feeling that the favored Christian rhetoric of the great-great-grandchildren of slaves is spiritually anemic or doctrinally heretical.

It is into these cultural milieus that Aaron Lavender writes, Endruing Truth: Restoring Sound Theology and Relevance to African American Preaching. Lavender, Pastor of Grace Baptist Church of Greater Kansas City in Kansas City, MO, and Vice President of Carver Baptist Bible College, Institute, and Theological Seminary (also in Kansas City), hails from the Fundamentalist Baptist Fellowship Association. In addition, he has strong, conservative evangelical biblical and homiletic education and training that, together with his denominational affinity, contributes to his assessment of the current state and needs of Black preaching.

Enduring Truth has a simple four-part format. An opening chapter surveys the modern history behind African American preaching. The three chapters to follow consider biblical exegesis for preaching, a theology of preaching, and the role of relevance in preaching. Each chapter ends with a set of discussion questions that provide the reader a means of reviewing the salient points of each section.

“The Crisis: Erosion of Biblical Preaching in African American Pulpits” provides a narrative from the slavery period through the Civil Rights Era that identifies three culprits behind the decline of Black preaching: Racial Segregation, Black Liberation Theology, and Prosperity Theology. Using broad strokes, the author depicts Black preaching as a response to a host of social ills spawned by America’s racist activity. Lavender finds both Liberation and Prosperity responses to be damaging rather than uplifting, for they hollow out the soteriological dimension of the gospel.

Lavender views the Scriptures as inspired by God and inerrant. Therefore, he argues that proper stewardship of God’s Word requires sound exegesis. Lavender feels that such exegesis is lacking in Black preaching. He places great emphasis on the fruit of faulty exegesis in the life of the local church. As a remedy, he provides a mini-lesson in the theory of a single-meaning hermeneutic for preaching. I was hoping this chapter also would lend itself to examples of doing the full process of biblical exegesis through a few passages of Scripture, especially since Lavender strongly commends it as a needed additive to Black preaching.

I am grateful for the author’s explanation of selective African American experiences to a broader audience. For example, on the significance of preaching to African Americans, he writes,

The African-American preacher is an important figure in the lives of black people, and his preaching is the centerpiece of worship in the black church. The average person fails to recognize just how significant the church is for African-Americans. For one, the African-American church is the one institution where average black people are in full control. They control the preaching, singing, leadership, and finances. Most every other aspect of society is dominated by whites or the rich and famous. In addition, the black church serves a social purpose, bringing together people who share the same struggles, persecutions, and fears. In the middle of this is the phenomenon known as black preaching. (pp. 59–60)

Contextualized statements of this sort might serve to help those outside of the African American community gain a greater appreciation for the way Black preaching is cherished as an expression of ownership. Within a culture that offers African Americans little participation in wealth and upward mobility, we have treasured the uplifting nature of Black preaching and found it to be rich in rebuilding the dignity of people whose worth is diminished by society at-large.

In contrast to a few positively-contextualized assertions, I found some parts of Lavender’s assessment of Black preaching to be overly-negative toward African Americans, while also portraying a “white” entity as savior for them:

The third problem was a propensity among black preachers to seek social justice through political activism. These preachers believed the gospel’s transformative power can—indeed … must—be applied to contemporary social, cultural, and political structures. Victimized by racism, the black church in America was set on a course that led it into heretical teachings. Even after African-Americans began attending white institutions, many still looked to political activism as a means to genuine equality. Sadly, the gospel occasionally got lost in the shuffle. (p. 11)

Pitting the gospel against social activism creates an unnecessary and theological false dichotomy. In terms of preaching, such a dichotomy is no more “biblical” than prosperity theology, as both have imbalanced emphases toward life in this age in comparison to the age to come.

Yet Lavender’s correctives are not completely without merit; some forms of African American preaching do lack sound doctrinal content, just as some forms of preaching from persons of any ethnicity lack sound doctrinal content. The expositor who wishes to improve his heralding of the gospel, with sensitivity to the stony road trod by African Americans, would do well to read Enduring Truth alongside of David Helm’s Expositional Preaching: How We Speak God’s Word Today (Wheaton, IL: Crossway, 2014) and Carl Ellis Jr.’s classic work, Free At Last? The Gospel in the African American Experience (Downers Grove, IL: InterVarsity Press). They will provide good balance to the practical and social concerns of Lavender’s thesis.