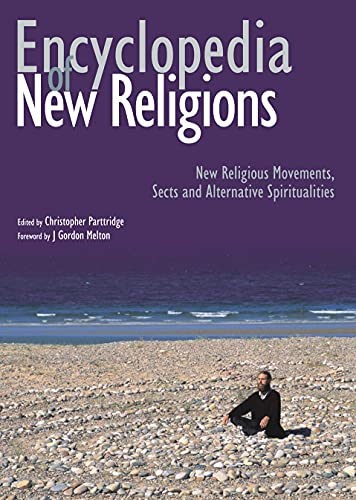 In the past, evangelicals were producing anti-cult books warning against the doctrinal dangers of the likes of Jehovah’s Witnesses and Mormons. Times have changed. The pejorative term ‘cults’ has been replaced by the more neutral ‘New Religions’ and the assumption that there are a handful of significant ones has given way to the realization that there are literally thousands of them. Descriptions of the most important ones are found in this commendable encyclopedia, each entry written by an expert and sometimes by a practitioner. The book is structured according to the major religious traditions of the world so that one finds an introductory section describing the religion and then examples of New Religions emanating from it. So, for example, under Islam we find, among others, Subud and Baha’i, and under Indian Religions, Transcendental Meditation and ISKCON. There are many others under each category that I have never heard of but they make fascinating reading. Indeed readers will sometimes feel they are on familiar territory with the Church of Scientology and the Wiccans only to hit upon the unexpected, the exotic and the bizarre as with the Breatharians, the Temple of the Vampire and Thee Church ov Moo (sic.)! The book’s basic structure is interlaced with first-class articles on such subjects as African Independent Churches, Prosperity Spirituality and Postmodern Spirituality. It is also richly illustrated.

Never since Constantine has Christianity in the West had to compete with such a growth of non-Christian and non-orthodox religious movements and it is imperative that we seek to understand them. This encyclopedia is an invaluable way in. The picture is rich and contrasting from the apparently benign to the self-destructive Branch Davidians and the People’s Temple. Some are world affirming like Creation Spirituality and some are world denying such as the Branch Davidians. Some are fundamentalist with strong inside/outside boundaries like the Exclusive Brethren and some are more open textured like the New Age movement. But some common themes emerge: they change rapidly and mature slowly usually with a cooling down period followed by the birth of a new, more respectable denomination such as the Methodists or the Jesus Fellowship (formally the Jesus Army). There is also a depressing pattern of schism over succession of leadership or the interpretation of texts and of failed apocalyptic predictions. A large number of them claim to have found a leader who will transform the planet.

The book succeeds admirably in what it seeks to provide: a value-free survey. The reader will need to look elsewhere for a Christian critique of various New Religions or for tips on how the Church should respond. So many interesting questions arise from reading a book like this—such as why people are attracted to various kinds, of movements but there is a useful, select bibliography provided for further reading, encyclopedia deserves strong recommendation.