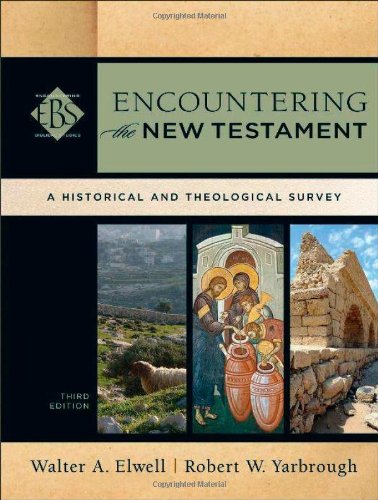 With this textbook we have arrived at an entirely new era in theological publishing. This volume is a production masterpiece reminiscent of some of the recent Lion publications. It is handsomely bound and illustrated, with glossy paper, colour photography, charts, diagrams and sidebars, and an attractive layout to make even the most disinterested student want to learn something about Scripture. What is more, it comes complete with a cd-rom in a pocket in the inside back cover. On this cd appear glossary terms, review questions, photo tours, and video clips of the two authors summarising each chapter and explaining key theological concepts. In addition, brief films take the interactive computer operator throughout the Mediterranean to view the sites surveyed in the NT literature, with beautiful music playing in the background. One may call up the major divisions and topics of each chapter for further interactive review. The authors have also worked hard, and largely succeeded, at composing a text which is not ‘over the heads’ of relatively biblically illiterate first-year undergraduates, but which nevertheless does not ‘dumb down’ the content.

There is no question that this book is highly attractive, interesting to read, easy to follow, and generally pitched at the right level. The authors’ warm evangelical Christian faith also shines through as they self-consciously commend Christian discipleship to their readers. The footnotes and bibliography interact with the most current literature, though the quality and scope of items actually cited, especially the commentaries, are inconsistent. Revelation seems to be dealt with strikingly briefly. Elwell has written most of the material on the Gospels, Yarbrough most of the material on the Epistles. The latter is perhaps of a little higher quality.

A few anomalies appear. The reference on page 29 to a recent study dating an ancient manuscript of Matthew’s gospel to around ad 60 includes no note that this study is almost certainly wrong! Twenty-four of the twenty-seven NT documents are called letters, including Luke-Acts and Revelation (40). Matthew is said to stress Jesus as ‘Savior of Israel and the World’ (81), even though that title is unique to Luke, while no reference to Matthew’s unique emphasis on Jesus as ‘Son of David’ or ‘Royal Messiah’ appears. It is curious to read that Mark emphasises the resurrection (92) when in fact he never narrates that event at all. And not one of the three explanations given for the Messianic secret in Mark (95) involves the most important probable explanation, namely Jesus’ desire not to fuel misguided nationalistic expectation among his contemporaries. On page 335, intriguingly, we have a map of Paul’s fourth missionary journey complete with stops in Tarrasco, I Toletum (both in Spain), Crete, Miletus, Ephesus, Philippe. Nicopolis, and Rome, with all of j the dates attached! One has to § read the actual text to determine that not one of these pieces of information is securely known. In the introduction to the epistle to the Hebrews, no mention is made of any location as a possible provenance of the letter. James, 1 Peter, and 1 John are not arranged from longest to shortest (contra 274); in fact, the reverse is true. The reason for the canonical sequence—James, Peter, John, Jude—seems rather to be the decreasing relative importance of these four authors in the earliest period of the life of the church.

Little room is given throughout this volume for less conservative evangelical theories regarding = authorship, date or composition of individual books. Without f exception, the most conservative or traditional information is given. But unlike most other surveys or introductions, other views and the authors’ reasons for rejecting them are seldom even presented. Curiously, Elwell and Yarbrough do a very good job of concisely presenting and refuting objections to the authenticity of 2 Thessalonians and 1 Peter. Similar treatment with books that are more consistently questioned (Ephesians, the Pastorals, 2 Peter) is needed. Our authors altogether reject the ‘new look on Paul’ without presenting it in enough detail for a beginner even to understand the options. Elwell and Yarbrough also clearly favour a hierarchicalist position in the debate over women’s roles. One particularly unusual sidebar appeals exclusively to Jesus’ choice of twelve male apostles as a reason for holding this view and suggests that rejection of this position illustrates a reader-response hermeneutic (176)! On other topics, however, such as spiritual gifts, the millennium, and whether or not Hebrews 6 teaches the apostasy of genuine Christians, our authors are more even-handed in presenting the options and do not take a clear stand. Particularly sensitive and balanced sidebars appear throughout the book on such topics as homosexuality, hell, universalism. and the ‘social gospel’.

The book has been extremely well proof-read, but I did notice William Ramsay’s name misspelled twice (256, 259), and Scot McKnight’s likewise (76, 136), even though both names are spelt correctly elsewhere in the volume.

This textbook has so many strengths that it may well become the standard for the next generation of teaching college and university freshmen in the United States. If indeed today’s students, so saturated with a lifetime of viewing television, video, and computer screens, can only learn well when one produces all the ‘bells and whistles’ that this book plus cd have generated, then Elwell and Yarbrough are a must. If I were still teaching undergraduates and were convinced that my students were good enough to handle superior content even when presented in a less attractive or varied format, I think I would stick with Robert Gundry’s well-established Survey of the New Testament (Zondervan, 1993). But for everyone else, Baker may have inaugurated a series that reflects the wave of the future.