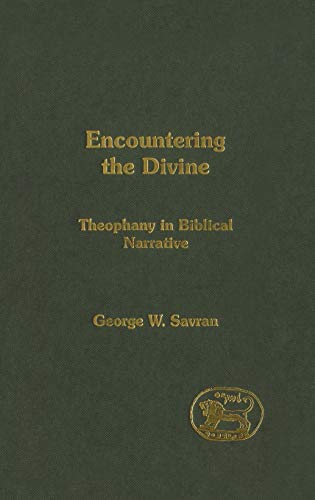 George Savran, professor of Bible at the Schechter Institute of Jewish Studies in Jerusalem, and the Hebrew University of Jerusalem, has a delightful volume on theophany, God’s appearances to man. Five chapters emphasize the literary aspects of the text-type schema of theophany narratives, nothing the preparations for, the visual aspects of, the human response to, and the transformations of the human recipient of God’s appearances. Three final chapters address literary motifs such as the potentially lethal nature of divine encounters, intertextual comparisons of various theophanies, and a tracing of theophany in Daniel and post-biblical apocalyptic literature. The literary analysis is most enlightening, as when theophanies to Moses and Elijah are compared at length (207–229). Savran writers clearly and logically, sharing helpful, fascinating insights into plot and character development.

The writing is up-to-date and aware of most relevant literature. Though written in English, it is intended for Hebrew scholars and students interested in scene development and narrator technique. The Hebrew text and individual Hebrew words are freely used and discussed. With 1010 footnotes, each page averages over four. The bibliography lists about 500 recent sources. Indices of Hebrew Bible references, ‘other ancient references’, and authors cited follows.

Savran does not distinguish between conscious reality and theophanic dreams and visions. Thus, he includes Jacob’s dream (Gen. 28), Isaiah’s and Ezekiel’s visions, and God’s appearances to conscious individuals such as Hagar, Moses, Balaam, Gideon, and Joshua as part of the same text-type schema. The comparisons of Genesis 28 and 32, Jacob’s leaving and return, are interesting, but why then does Savran omit Jacob’s dream (Gen. 31), and the bold theophany of Genesis 35:9–13 Understandable, but still troubling, are Savran’s critical suppositions about the biblical text. He speaks of ‘Deuteronomic reworking of the Sinai traditions’ (24; ‘a highly composite set of traditions’ (27); ‘subsequent editing’ (53); ‘an earlier stage of the story’ where Jacob wrestles with a demon (37), and that the Genesis 32 scene is ‘actually pagan in origin’ (84) the story of Balaam’s ass ‘may have originated as an independent narrative’ (46); ‘multiple sources in our text’ (93); ‘a new ending … was subsequently appended’ (154); and ‘a complex redactional history’ (164). There is no factual basis for these critical notions. Pure fancy, they question the integrity of God’s Word.

This fallacy leads Savran to miss important interpretational clues. Instead of allowing the text to indicate that the Malakh who spoke to Hagar was actually Yahweh, Savran posits ‘different redactional layers of the text’ (128). The pentateuchal author, however, plainly notes that one who spoke to Hagar, the Malakh, was Yahweh (Gen. 16:13). The Malakh and Yahweh are one, yet distinct. In short, Savran treats the text as an interesting, well-composed human literary document.

Despite these observations, I enjoyed the reading and would recommend it to others interested in a detailed narrative portrayal and character study of the recipients of theophany.