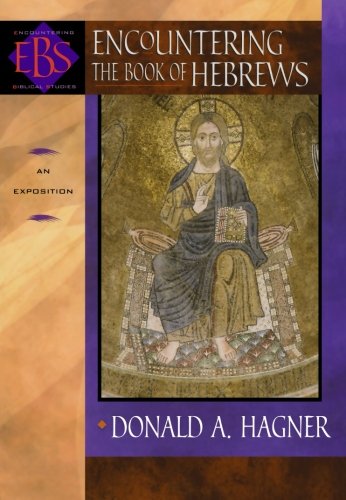 ENCOUNTERING THE BOOK OF HEBREWS

This is a new type of commentary for me. The series Encountering Biblical Studies is intended as ‘pedagogically oriented textbooks’ for ‘college-level Bible courses’; the publishers intend it to be ‘unique but not trendy’. The most obvious difference is the liberal (excessive?) use of ‘sidebars’ (what we used to call ‘boxes’ inserted alongside the text), pictures, headings, etc., to break up the text, so that you hardly ever get a page of straight (two-column) print. It is designedly user-friendly and very easy to find your way about.

It is not so much a commentary as a guide to following the argument of the book, sensibly dealing with sections rather than verses and supplied liberally with bibliographies for further study. The content is admirable. Hagner’s impressive familiarity both with Judaica and with post-apostolic Christian literature is brought to bear in the most accessible and enriching way. Having recently completed a commentary of Hebrews, I found myself constantly saying ‘Yes, that’s right, and why didn’t I think of putting it as well as that’. It is meaty, rather than easy reading, but there is constant nourishment for the intelligent, well-motivated reader. Hagner is an enthusiast for Hebrews, even describing the christological argument from Psalm 40 in 10:5–10 as ‘absolutely brilliant’; others have had other ways of describing it!

Hagner is generally sensitive to current debate. In a helpful treatment of the ‘apostasy passages’, he avoids getting into a dogmatic tangle by looking first at their literary function. I was surprised, however, to see no comment on the issue of parental discipline in 12:4–11 from the point of view of current practice and sensitivity.

One regrettable feature (down to the publishers rather than the author?) is the use of the traditional chapter divisions as the basis of discussion. As a result, for instance, the exposition of Psalm 95 in 3:7–4:13 is split between two sections, and the continuity from the quotation of Habakkuk 2:4 at the end of chapter 10 into the exposition of faith in chapter 11 with its climax in 12:1–3 is hopelessly obscured and the traditional treatment of chapter 11 as a self-contained unity unfortunately perpetuated.

There are 72 ‘sidebars’, ranging form the exegetically essential to the banal. Some simply list Hebrews’ uses of a given work or phrase; some discuss key words or concepts (‘perfect’; ‘covenant’; ‘dualism’); some extrapolate beyond Hebrews (e.g. ‘The Identification of Jesus with YHWH in the NT’). The final sidebar (188) valiantly attempts in a single ultra-Pauline sentence of over 200 words to set out ‘The Quintessence of Hebrews’).

Many of the illustrations are from the author’s own excellent photographs, but the reproduction is painful, using muddy black and white for what appear to have been colour originals, so that Mediterranean blue skies appear black and threatening.

A very worthwhile and heart-warming commentary, and a commendable attempt by the publishers at a user-friendly format, though the latter still needs some refinement.