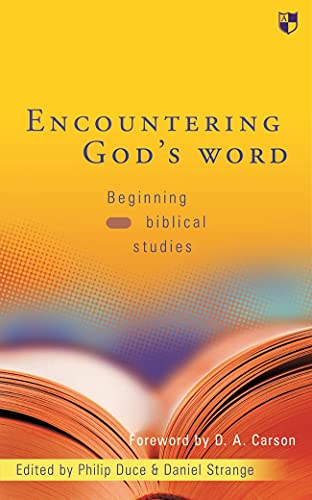 This is the third book that is edited by Duce and Strange and aimed at helping those engaging in biblical and religious studies (see previous review of Keeping Your Balance in Themelios 28.2). The previous two books have addressed the integration of faith and learning and getting up to speed on modern theologians. This volume, as the title states, addresses specifically issues concerning biblical studies. The book contains four substantial essays: P.J. Williams on Old Testament Study, A.I. Wilson on New Testament Study, A. Billington on hermeneutics and D. Gibson on the reliability of Scripture. The essays are particularly directed to students studying in British universities. Those in American contexts may find some aspects puzzling but the overall content will still be useful.

The OT essay may have been my favourite part of the book. Engagingly written, the essay unapologetically calls for a particularly Christian approach to the OT—something which needs defending not only in the secular British university but often in American evangelical seminaries as well. Williams then deals with issues of historicity, composition, ethics and some specific points of interpretation.

Wilson’s NT essay is similar. He lists many of the various sorts of criticisms as surveys often do, but he also provides examples or excerpts of each. Both the NT and OT essays emphasise the value of obtaining a good grasp of the overall text itself, of honing one’s writing skills and of studying the biblical languages. Both essays also provide some bibliographic help including web resources.

Billington gives a very able survey of the issues currently at play in the field of hermeneutics. His footnotes show that he is well read and interacting with the latest research making this a good overview for a refresher or introduction. The section on biblical theology was particularly good. Gibson then presents a well argued presuppositionalist case for belief in the Bible. This essay will be of obvious value in a secular setting, but will also be of use to those in evangelical seminaries who may not have considered a presuppositionalist rather than evidentialist approach.

This book is to be commended as a useful resource. For the student (beginning or underway) it will be a faithful guide to making the most of one’s study while holding to the faith. For those who have completed their degrees (pastors or teachers) these essays are good summaries for use in teaching or refreshing.