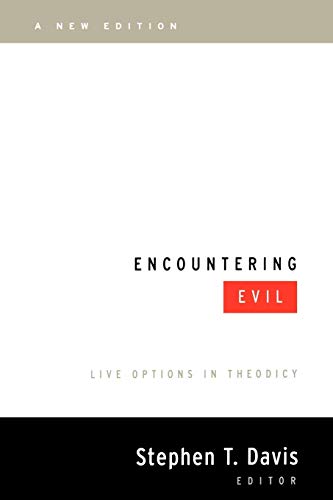 This is an interesting and useful approach to the theodicy issue. Its subject-matter alone would commend it; for whether we may approve or not, the relation between God and suffering, and hence of the justification of God and of belief in him in face of suffering (the Holocaust) and of the grim apocalyptic spectres which may conceivably lie just over the horizon, are near to the centre of current theological debates. ‘Today it is again realised that Christian theology has its broadest and most controversial relationship to the world within the horizon of the question of theodicy’ (Moltmann). This book responds to this context philosophically rather than theologically, but there are theological dimensions to the discussion throughout.

The format merits comment. The five who contribute to the main discussion are all philosophers or philosopher-theologians who teach at the Claremont Colleges in California, and who it is claimed, have ‘jointly written more on this (theodicy) topic in the past two decades than all the theologians of North America combined’ (p. 172). Each is broadly representative of a distinguishable theistic response to evil. John H. Hick expounds his well-known Irenaean theodicy, David R. Griffin his process approach. John K. Roth argues a Jewish-influenced ‘protest’ theodicy, and Frederick Sontag a broadly similar existentialist approach. Stephen T. Davis contributes as ‘an analytical philosopher and evangelical Christian’ refurbishing the free will defence. Each chapter consists of an exposition by one of the contributors, responses by the four others and then a final reply. The whole thing is concluded with an evaluative ‘pastoral’ postscript by John B. Cobb, Jr. There is a perhaps understandable tendency in the responses simply to reiterate the author’s own positions so that by the second or third chapter there is a certain predictability in the arguments presented; however, the dialectical format enables interest to be sustained throughout.

The contributors, generally speaking, follow the traditional theodicy options of easing the tension for theism by playing down one of the three terms of the dilemma (‘God is all-good’; ‘God is all-powerful’; ‘there is evil’). Thus Roth and Sontag reduce the goodness of God, Griffin the omnipotence, and Hick the reality of evil (by way of his all-embracing universalism). Davis best retains the tension of the three terms and argues fairly effectively for the free will defence à la Alvin Plantinga, and also strives manfully throughout to maintain the importance of revelation and biblical authority in particular. One might have wished that his account had paid a little more attention to the need for theism to establish not simply logical possibility but also historical plausibility for its response to evil (cf. N. Geisler, Philosophy of Religion, p. 323f.). A more significant lacuna however appeared to be his hesitation to avail himself, even in outline, of the full biblical resources for a Christian response to evil and suffering (as distinct from a theodicy in the strict sense, which, arguably, Scripture does not provide)—the incarnation as God’s entering as an experiencing existent our order under evil and suffering; the resurrection as the demonstration in space and time of God’s victory over evil and therein the promise of the final eschatological-historical triumph over this entire dimension; the Holy Spirit and the resources of Christian faith for combatting, and even in measure ‘redeeming’, suffering and evil; faith itself as on the model of Abraham (Gn. 15 and 22; Rom. 4) a believing ‘in spite of’, a believing in face of the apparent silence and absence of God. And perhaps above all, the cross, both as the highest and deepest moment in the divine self-identification with us under evil, but also as God’s moral act of wrath-bearing grace in response to and in contradiction of our immoral act of sin and rebellion which provided the ‘way-in’ for evil (Gn 3; Rom. 5). This moral dimension is crucial to a biblical response to evil, particularly when the paradigm today is the holocaust, which was the result every bit as clearly of the wickedness and abomination of man as of any alleged weakness or abandonment by God.

All four of the contributors other than Davis reject biblical revelation to a greater or lesser extent. Hick rejects the fall and future divine judgment; Sontag and Roth both reject the essential biblical-christological framework and are thereby forced back on various existentialist insights, albeit at points movingly expressed. Griffin rejects biblical creation, and remarkably achieves an exposition of a ‘Christian theodicy’ which contains not a single reference to Jesus Christ—an interesting demonstration in its way of how impossibly difficult it is to combine a real incarnation and a process philosophical orientation.

Cobb’s final summing up attempts to relate the discussion to pastoral realities (but is ‘why’? the essential question of terminal cancer sufferers? In this reviewer’s experience, for what it is worth, the ‘how’? question is just as pressing … ‘how will I cope’? ‘how will I, and how can I, face dying’?). Theologically Cobb advances a Griffin-type, finite-God solution.

In summary, this is a useful volume. Students of philosophy of religion will find here resources for the inevitable essay/examination answer on the problem of evil. But more substantially all preachers and interpreters who face the challenge of articulating and expounding ‘the faith once for all delivered’ will be given here valuable insights into the mood of our time and some of its attitudes which, by the sovereign ministry of the Spirit, the gospel must address if it is to retain credibility in a suffering-conscious, man-centred world.

The relevance of theological education

The ‘Majority Text Debate’: New Form of an Old Issue

Jean Calvin: the father of capitalism?

by Gordon J. Wenham
VIEW ALL VIEW ALL

The Quest for the Historical Israel: Reconstructing Israel’s Early History

Kingdoms of the Lord

Those who Ponder Proverbs: Aphoristic Thinking and Biblical Literature

Reviewed by Derek Kidner
Old Testament
VIEW ALL VIEW ALL