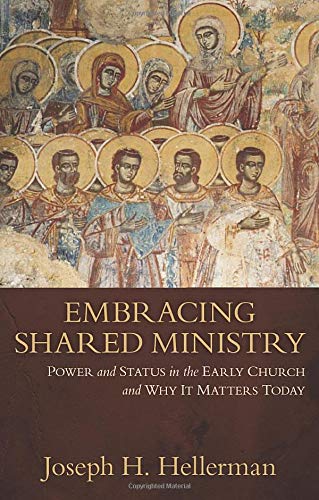 Embracing Shared Ministry: Power and Status in the Early Church and Why It Matters Today

Joseph Hellerman, professor of New Testament Language and Literature at Talbot School of Theology and co-pastor at Oceanside Christian Fellowship, has written an academically responsible yet pastorally accessible book on church leadership. His other works bear heavily on the method and material of his current work (see Jesus and the People of God: Reconfiguring Ethnic Identity [Sheffield: Sheffield Phoenix, 2013]; Reconstructing Honor in Roman Philippi [Cambridge: CUP, 2009]; When the Church was a Family: Recapturing Jesus’ Vision for Authentic Christian Community [Nashville: B&H, 2009]; The Ancient Church As Family [Minneapolis: Fortress, 2001]).

Hellerman’s scholarly expertise in Greco-Roman sociology and ecclesiology come together as he argues that Paul (in particular) and the New Testament (in general) advocate a shared leadership model in the Christian church. Focusing especially on Philippians, he argues that the Pauline model is in direct opposition to the Greco-Roman emphasis on hierarchy and personal advancement. Hellerman seeks to “craft a biblical theology of leadership and community that will equip us to address issues of power and authority in our churches today” (p. 15). In many ways, he argues that the same sins of prestige and power have infiltrated many modern churches.

Part 1 (chs. 1–3) lays out the Greco-Roman model of leadership (e.g., civic, political, military) that would have pervaded the Philippian colony. In stark contrast to this model, Philippians presents a message of partnership, mutuality, and humility. Part 2 (chs. 4–6) examines a Biblical model of leadership directly from the Philippian epistle. This approach is explicitly “other-centered” (Phil 2:1–4) and is exemplified by Jesus Christ (Phil 2:5–11). Part 3 (chs. 7–10) applies these principles to the contemporary church. Hellerman’s academic expertise is woven throughout but his pastoral sensitivity is particularly noticeable in last section.

The thesis of the book is strongly supported: shared, humble leadership is the basic model of the New Testament in regard to the character and function of pastors. By comparing the Philippian epistle to the pagan ethos of an ancient Roman colony, Hellerman illustrates his points powerfully. The arguments for mutual participation, humility, and partnership in both gospel proclamation and church structure are strongly supported by Paul’s instruction in Philippians. Finally, the author’s great concern is to see these principles reflected in the character of church leaders and structure of contemporary churches.

At the same time, when an argument is this compelling it only helps to sharpen it by pointing out its weakest points. First, the author calls this a “biblical theology” when, in actuality, it is a theology of shared leadership from the epistle to the Philippians. It is not technically even a Pauline theology of shared leadership. That being said, many texts in other parts of the NT and early Christian literature argue for shared leadership: the Gospels (Matt 23:8–12), Acts (14:23; 15:6, 22), other Pauline letters (Titus 1; 1 Tim 3–5; 1 Cor 12:28–29; 14:29), the general epistles (1 Pet 5), and elsewhere (1 Clement). These other points are briefly mentioned (pp. 193–96) but not adequately explained or explored (even though they often contain stronger arguments in regard to the thesis of “shared leadership in the church”). Therefore, a true “biblical theology” of shared leadership would prove the argument better.

I would hesitate to make too strong an objection to the author’s method but it is worth mentioning. The historical and sociological approach is illustrative and powerful but affects the actual thesis very little (in this case). Hellerman’s conviction of shared leadership is based in the biblical text. The countercultural nature of such a conviction is exacerbated against the hierarchical social structures of both ancient Rome and modern society, but the content of the conviction is found in the text alone. Not only in the introductory material but throughout the book Hellerman often strays unnecessarily into the Greco-Roman cultural milieu.

Many of his stories are anecdotal. These illustrations are often poignant and powerful. In the end, however, they should not be instructive for a truly “biblical” theology. Also, they run the risk of being too personal when specific names and situations are easily discernible (e.g., pp. 174–78).

Finally, there are some important objections to shared leadership that one would hope to see answered. A single pastor/elder model of church teaching and leadership is prevalent in the history of the church. A single leader is often found in the OT (e.g., Moses, Joshua, etc.). The NT has a few dominant leaders (e.g., Peter, James, etc.). While these objections are easily overcome by the explicit teaching of elder plurality (as others have done), they are not dealt with in this work.

At the end of the day, the biblical evidence and model of Jesus is clear. No one human leader has all the answers, vision, or experience to lead the church. Only Jesus holds such esteem in the NT. When such a model is abandoned, unhealthy attitudes of authority are often abused to the harm of the local church. Hellerman’s practical and biblical advice is a wonderful start for anyone exploring a biblical model of leadership, and the attentive senior leader who reads this work with openness will be challenged to embrace humble, communal, shared leadership rather than controlling, isolated, and dysfunctional authority.