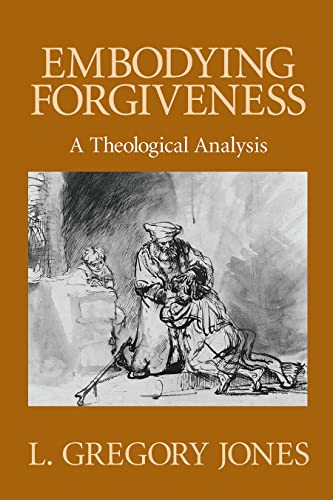 As Christians, we intuitively understand that forgiveness should somehow be central to the gospel. Still, vexing problems remain as we seek to understand how we may best apply Christ’s forgiveness to people caught up in difficult personal, social, and political situations. In Embodying Forgiveness, L. Gregory Jones tackles the weighty issues of how Christians can demonstrate the forgiveness the gospel demands, while providing justice for both the victims and perpetrators of evil.

Jones’s main thesis is that Christian forgiveness should be viewed as a craft to be learned from mentors who transmit the ways of forgiveness to others, who, in turn, learn forgiveness by practising it within the context of a believing community. As a worthy mentor, he picks Dietrich Bonhoeffer, who sought to recover forgiveness from the twin dangers of his day—cheap grace, and the encroaching darkness of Nazi Germany which threatened to make ludicrous the very concept of forgiveness—dangers which, according to Jones, parallel those of modern-day Christians. Jones picks up on Bonhoeffer’s idea that forgiveness occurs through discipleship, rather than merely through acts of confession. He counsels that we too, while facing difficult choices in our embodiment of forgiveness, may learn from wise people how best we can live out such forgiveness in the context of a practising community.

For Jones, Christian forgiveness is not primarily absolution of guilt; rather, its purpose ‘is the restoration of communion, the reconciliation of brokenness’ (p. 5). Jones argues that absolution given without regard to theological concepts, such as repentance and learning new habituated patterns of forgiveness, results in a ‘therapeutic forgiveness’ which may salve the individual’s conscience but is also likely to trivialize the individual’s guilt. He likens this to a kind of modern-day ‘cheap grace’.

The other danger is the ‘eclipse of forgiveness’ by the encroaching darkness of nearly incomprehensible violence. Jones attempts to address the hard choices Christians must make relative to forgiveness in the face of violent crimes so evil that one is tempted to render the verdict that certain persons, groups and systems are unforgivable—at least in this age. He contends that arguments like those of Nietzsche, i.e. that forgiveness is impotent against violence, are viable only against a decadent, therapeutic forgiveness which ignores the suffering of the victim. He posits forgiveness as a ‘judgment of grace’ which aims at providing justice for the victim and reconciliation (if possible) between the offender and the offended. The offender must then demonstrate real repentance by learning new reconciling habits of non-violence. Jones analyses and discusses this problem through societal lenses such as Clint Eastwood’s movie Unforgiven and the novels of Flannery O’Connor. This is done to discern what these stories may teach us about forgiveness. He also, to his credit, examines the works of non-conservative theologians like liberation theologian Gustavo Gutierrez. These descriptive analyses are the highlight of the book, not only because of their engaging style, but also because Jones truly does seek to discover what sociological, psychological, non-conservative theologies, and the Judaic tradition, may impart to a truly Christian view of forgiveness.

Jones presents us with a vision of forgiveness that is deeply rooted in the triune God. He stresses that God’s prior forgiveness of humanity in the sacrifice of Christ, mediated by the Spirit and appropriated by beings created in the image of God, cannot be ‘unalterably condemned or abandoned’ (p. 273). In this context, he does not mention any previous Christian theories of retributive justice. He does not even touch on St Paul’s teaching in Romans 13. Still, he posits a Christian understanding of punishment which includes elements of retribution, deterrence, and rehabilitation theories. This silence on a Christian formulation of the retributive power of the state is a major weakness (whether or not one believes in capital punishment).

Overall, this book should advance discussions of forgiveness within a Christian philosophical and ethical framework. Intermediate or advanced students of philosophy and theology will find much that is helpful. At times Jones, without definition, introduces philosophical terms and concepts which may not be familiar to all interested readers. At other times his discussion is too abstract. Of course everyone knows that Christians ought to embody acts of forgiveness which reflect the already forgiven state of former sinners, but how we actually go about doing it is another matter. With a book entitled Embodying Forgiveness, one expects practical examples of how actually to demonstrate forgiveness in this fallen world. What one gets is a good theological analysis (which is promised in the sub-title). One could perhaps hope for more than this. One certainly would not be satisfied with less.