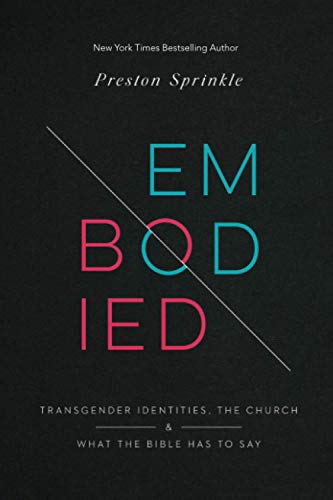 Embodied: Transgender Identities, the Church and What the Bible Has to Say

Of all the recent evangelical engagements with the questions raised by transgender experience, Preston Sprinkle’s Embodied is, arguably, the most comprehensive, penetrating and compelling. The book not only addresses the cultural, medical, psychological and social angles of the trans phenomenon, but also includes several chapters of incisive biblical exposition and valuable theological exploration (plus 43 pages of endnotes). Although not without the occasional inconsistency, Embodied is marked by a powerful commitment to biblical truth matched by an equally strong concern for real people. Accordingly, the work is set in a decidedly pastoral frame and is marked by a deeply compassionate tone throughout.

The opening chapter (“People”) introduces readers to a number of real people and their stories. In chapter 2 (“Ten Thousand Genders”), Sprinkle turns to definitions, starting with the key term, transgender, and the various shades of what it might mean for someone to label themselves “trans*.” (Sprinkle adopts the practice of putting an asterisk after “trans,” to indicate that he is using it “as broad umbrella term to include a whole range of identities that aren’t strictly transgender, such as nonbinary, genderqueer, and the like” [p. 33].) He then proceeds to discuss terms such as gender dysphoria, transition, cisgender and intersex, before explaining the difference between sex and gender—parsing the latter in terms of gender role—“how males and females are expected to act in any given culture” (p. 43)—and gender identity—“one’s internal sense of self as male, female, both, or neither” (p. 47).

After further unpacking the question “What Does it Mean to be Trans*?” in chapter 3, chapter 4 (“Male and Female in the Image of God”) begins a series of chapters which examine the Bible’s teaching. Sprinkle starts by stressing the importance of human physicality to divine image-bearing, in order to make the important point that “we bear God’s image as male and female” (p. 67). While Sprinkle is quick to clarify that male and female are sex (not gender) categories, he strongly affirms Phyllis Bird’s contention that biological sex is “an essential datum in any attempt to define the human being and the nature of humankind” (p. 68, citing Bird, “Bone of My Bone and Flesh of My Flesh,” Theology Today 50 [1994]: 531). Indeed, it is our sexed embodiment that explains why “Jesus views Genesis 1–2 as normative” (p. 70); Paul “sees the body as significant for moral behavior and correlates the body with personhood” (p. 71); “Scripture prohibits cross-sex behavior” (p. 72); and “sex difference probably remains after the resurrection” (p. 75). Of particular importance is his observation that “the incarnation of Christ affirms the goodness of our sexed embodiment” (p. 74).

Chapter 5 wades into the conflicted terrain of “Gender Stereotypes.” Sprinkle notes that while stereotypes may be accurate descriptions of how many men and women behave, “they aren’t biblical prescriptions for all” (p. 85, emphasis original). In fact, he suggests that “Scripture contains hardly any sex-specific commands” (p. 92). He does, however, observe some—many pertaining to husbands and wives (e.g., Eph 5:22; Tit 2:5; 1 Pet 3:1), some concerning the ministry of women in the church (e.g., 1 Tim 2:12; 1 Cor 14:34–35), and others (e.g., Deut 22:5; 1 Cor 11:2–16) “establishing a principle that men and women should maintain distinctions in how they present themselves” (p. 94). Nevertheless, he is concerned that this principle be applied with care, as “the meaning of clothing is culturally bound” (p. 95).

In chapter 6, Sprinkle turns to the subject of eunuchs in order to engage with the argument that “gender should supersede sex when there’s incongruence” (p. 97). In response to the claim that “the binaries of Genesis 1 are polar ends of a spectrum, allowing for hybrids and variations in between” (p. 98), Sprinkle points out that we “simply don’t encounter humans identified as something other than male or female in Scripture” (p. 99). He then turns to Matthew 19:12, arguing that while we cannot hope to know the “internal psychology” of eunuchs, they were normally regarded as biological males (albeit infertile ones), which is why Jesus invokes them as “a symbol of singleness” (p. 102). He further suggests that even if it could be shown that Jesus’s reference to “eunuchs from birth” included certain intersex conditions, what cannot be concluded is that “a person’s internal sense of self is more definitive than their biological sex when there is incongruence between the two” (p. 104). The chapter continues with helpful discussions of Galatians 3:28, Matthew 22:30, and the Bible’s familiarity with people attempting to cross gender boundaries. It concludes by addressing the question: “Should the church accept trans* people?” Sprinkle’s answer is an unequivocal Yes, with the caveat that “Christian discipleship means moving toward embracing our embodied identities” (p. 113).

Chapter 7 explores the complexities of intersex conditions, largely to address the since intersex, therefore transgender argument of trans-affirming authors. The first thing Sprinkle notes is that “99 percent of people who have an intersex condition are unambiguously male or female” (p. 122). As for the remaining 1%, he suggests that they are best regarded as a “blend of the two biological sexes rather than a third sex” (p. 124). Irrespective of how those with intersex conditions identify, Sprinkle does not believe they give support to the idea that a trans* person’s internal sense is more indicative of who they really are than their body. Trans* and intersex are “two different ontological realities” that “shouldn’t be quickly mapped onto each other” (p. 126). The chapter concludes by raising the question, “Is Intersex Caused by the Fall?” Desiring not to exacerbate “deep wounds of societal dehumanization” (p. 128), Sprinkle declares himself to be uncertain as to how best to answer the question.

After a well-researched chapter that casts serious scientific doubt on the possibility of a person having a male brain and a female body (or vice versa), chapter 9 turns to the deeper question of whether a person can have a female soul in a male body (or vice versa). Sprinkle begins by pointing out that because sex is a biological category, “immaterial souls can’t be sexed” (p. 149). After laying out additional challenges to “the sexed-soul theory,” he concludes that the only way an affirmative case can be made is, first, by assuming a strong form of substance dualism (which he deems unbiblical) and, second, by “relying on modern, stereotypical assumptions about what constitutes femaleness and maleness” (p. 153).

The remainder of Sprinkle’s book deals with a range of relevant issues and practical questions: rapid-onset gender dysphoria (ch. 10); transitioning and Christian discipleship (ch. 11); pronouns, bathrooms, and sleeping spaces (ch.12). Following a brief pastoral conclusion, Sprinkle issues a welcome call for “less outrage and more outrageous love” (p. 224). The book is then completed by an important appendix on “Suicidality and Trans* People,” which is both compassionate and judicious. On the one hand, Sprinkle acknowledges both the high suicidality rate (probably 22%) and that “minority stress plays at least some role in mental health issues like anxiety and depression among trans*-identified people” (p. 236). On the other, he recognizes that “the presence of co-occurring mental health concerns” may largely explain the high rate and that “weaponizing suicidality to push a particular ideological point might actually increase suicide attempts among trans* people rather than reducing them” (p. 239).

While Embodied has numerous strengths, it also has some weaknesses. Many are minor matters of language (e.g., overuse of the term “non-trans*” people), but some are more substantial. Particularly puzzling is chapter 7’s openness to intersex conditions existing before the Fall—especially in light of the case argued in chapter 6. In support of his agnosticism, Sprinkle declares that he “wasn’t in the garden before Adam and Eve sinned” (p. 127). Quite so. Only two humans were: Adam, a male, and Eve, a female (cf. Gen 1:27–28). Therefore, while we should take pains to communicate that intersex persons are not “fallen in more severe ways than non-intersex persons” (p. 128), failing to affirm what Scripture makes plain—that “eunuchs from birth” (Matt 19:12) were not present in creation “from the beginning” (Matt 19:4)—is not the way to achieve this.

The other point at which I find Sprinkle unpersuasive is in his advocacy of “pronoun hospitality” (p. 205)—i.e., always using a trans* person’s chosen pronouns. Although he fairly lays out the arguments for and against this practice, he seems to miss the weaknesses of the former and the strengths of the latter. Ironically, the argument that seems to carry most weight for him—that pronoun hospitality “communicates respect” (p. 207)—is an instance of the kind of utilitarianism he elsewhere criticizes (pp. 190–91). Doubtless, a dubious means (e.g., using a false pronoun) may sometimes be the only way to achieve a desirable end (e.g., preserving a relationship). But, as Abigail Shrier argues in Irreversible Damage: The Transgender Craze Seducing Our Daughters (Washington, DC: Regnery Publishing, 2020), it may also do greater harm in many cases, particularly in the longer term. On a consequentialist ethic alone, then, pronoun avoidance (rather than compliance) would seem to be the wiser default practice.

These points of disagreement notwithstanding, Embodied is a timely and much-needed book. Personally, I plan to keep a number of copies on my shelf, so that I’m always ready to put one into the hands of a Christian who is either wrestling with their own gender incongruence or seeking to care for a gender-confused loved one.