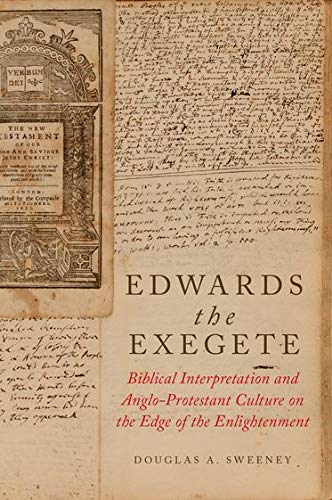 Edwards the Exegete: Biblical Interpretation and Anglo-Protestant Culture on the Edge of the Enlightenment

Written by Douglas A. Sweeney Reviewed By Nathan A. Finn
History and Historical Theology

In recent years a growing number of scholars have written on Jonathan Edwards’s bibliology. Yet, within that broad category Edwards’s approach to biblical interpretation remains an understudied topic. Though scholars have published several fine essays and written a handful of monographs on Edwards’s interpretation of particular biblical books, before now no one has ventured a comprehensive, book-length treatment of Edwards’s hermeneutic.

Doug Sweeney is a church historian who serves as director of the Jonathan Edwards Center at Trinity Evangelical Divinity School. Over the past fifteen years or so no scholar has done more than Sweeney to shine light on Edwards’s views on biblical interpretation. He has co-edited a compilation of Edwards’s sermons, written numerous journal articles and book chapters on Edwards’s use of Scripture, and published a fine book that examines Edwards’s pastoral vision (Jonathan Edwards and the Ministry of the Word [Downers Grove, IL: IVP Academic, 2009]). Sweeney’s work on this topic has culminated in his latest book, Edwards the Exegete: Biblical Interpretation and Anglo-Protestant Culture on the Edge of the Enlightenment.

Sweeney argues, “we fail to comprehend Edwards’ life, thought, and ministry when viewing them apart from his biblical exegesis” (p. ix). This is a mistake because, as Sweeney notes, “Edwards devoted most of his waking life to studying the Bible, its extra-biblical contexts, its theological meanings, and its import for everyday religion” (p. 5). Over the course of ten chapters, divided into five parts, Sweeney sketches the contours of Edwards’s hermeneutic. The opening two chapters offer necessary prolegomena. Edwards’s world was saturated with Scripture, even as Enlightenment scholars were raising questions about the Bible’s veracity. Edwards studied the Bible using the best critical tools of his era. However, he never wavered in his high view of Scripture and his study of the Bible was always for the sake of personal devotion and public proclamation. As an heir of the Reformed tradition, he believed Scripture was true and that it was a unified text theologically. He practiced both literal and spiritual exegesis. Edwards was what many scholars would call a pre-critical interpreter, though Sweeney frequently pushes back on that term, preferring simply to understand Edwards in his own context rather than scrutinize him according to contemporary standards (pp. 42, 101, 153).

The remainder of Edwards the Exegete looks at four different, sometimes overlapping hermeneutical strategies Edwards employed. Each part includes a chapter focusing on definition and survey, followed by a chapter devoted to a case study from Edwards’s corpus. Edwards embraced a canonical hermeneutic, assuming a unity between the Old and New Testaments and drawing on the analogy of Scripture and the analogy of faith for interpretive boundaries. The Old Testament was interpreted in light of the New, as illustrated in the case study of Edwards’s use of Hebrews to interpret Melchizedek. Edwards also adopted a christological hermeneutic, interpreting all of Scripture, including the Old Testament, through the lens of Christ’s life and death. This approach was illustrated in his spiritual exegesis of the Song of Songs, wherein the erotic imagery is applied to Christ’s love for the church.

Edwards next employed a redemptive-historical approach, built on the foundation of federal theology, which provided an eschatological flavor to his exegesis of Scripture. Not surprisingly, Sweeney focuses on Edwards’s postmillennial view of John’s Revelation as his case study. (However, Sweeney argues the “postmillennial” label is anachronistic [p. 163].) Finally, Edwards emphasized spiritual application in his hermeneutic, mining “Scriptures for instruction from his Maker on the course of human flourishing” (p. 188). For example, in his preaching and teaching on justification he also focused on the necessity of sanctification in an effort to counteract the intellectualist tendencies among some Protestants.

Throughout the book, Sweeney evidences both a sweeping knowledge of Edwards’s writings—published and unpublished—and a clear grasp of the history of interpretation. Time and again, Sweeney demonstrates familiarity with the best of historical scholarship, whether he is discussing nuances within Deism, challenging common assumptions that the reformers and their successors rejected allegory, or acknowledging the existence of a Christian version of the Enlightenment. Sweeney is also familiar with all of the commentators and other scholars whom Edwards drew upon in his own exegesis. Sweeney debunks the common claim that Edwards embraced a view of justification that is amenable to Catholicism; like his Puritan forebears and early evangelical contemporaries, Edwards was resolutely anti-Catholic. Sweeney ably argues that Edwards held to multiple interpretations of Scripture, like most pre-modern exegetes, but that he refracted his interpretations through a synthesis of the Enlightenment and the classic Reformed emphasis on illumination. Edwards was familiar with theories of historical criticism, and at times appropriated them, but he remained a pastoral interpreter who was irrevocably convinced of the inspiration, truthfulness, and sufficiency of Scripture.

Edwards the Exegete is a first-rate work of historical scholarship that fills a gaping hole in Edwards studies. At the same time, I found the book to be edifying and instructive. Though Sweeney is writing for the guild, his critical-yet-sympathetic account of Edwards’s thought, coupled with so much of Edwards’s own exegetical musings cited and summarized throughout the book, both informed my understanding of Edwards’s exegesis and refined my own thoughts about hermeneutics. This book is essential reading for scholars interested in Edwards, the historical of biblical interpretation, and early transatlantic evangelicalism. It would also prove a fruitful resource for biblical scholars and theologians interested in the Theological Interpretation of Scripture movement. But this is also that rare technical scholarly monograph on Edwards’s thought that everyday pastors should also read. I hope Oxford University Press will publish a less-expensive paperback edition so that Sweeney’s excellent book will be more accessible to those who labor at the same exegetical work to which Edwards’s dedicated his own ministry. Highly recommended.