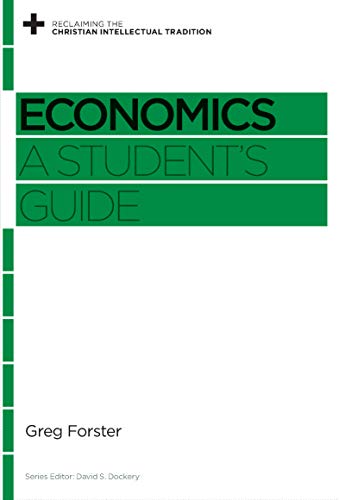 The fundamental argument and approach of this book is also its greatest strength: that work and economics constitute a basic missiological category and, as such, form a battleground for competing ideological and idolatrous narratives, and therefore our perspective on them must be fundamentally spiritual and theological in nature.

This short introduction to economics is part of the ‘Reclaiming the Christian Intellectual Tradition’ series published by Crossway. The series aims to help Christian students, and their educators, better integrate faith and scholarship across all the major academic disciplines. Forster’s treatment of economics is well pitched for this audience, being ideal for undergraduates of all disciplines and particularly important for first year students of economics and theology.

The author is director of the Oikonomia Network of theological educators in the US, and is associated with its sister network of local church leaders, Made to Flourish. Both networks seek to recover and centralise a more integrated whole-life approach to discipleship and mission in which faith, work and economics are key themes.

In the opening chapter, Forster frames his own task in terms of spiritual warfare: how we think about and act within the economic realm is very much on the front line of the advance of the kingdom of God in the world. The need to remain cognisant of this, and to develop a theological perspective on economics, constitutes the major part of the book’s argument. Chapter 2 sets out the author’s approach to this task. The challenge of recontextualising biblical texts for today is addressed within a narrative approach to Scripture and a pneumatological philosophy of history (somewhat reminiscent of Charles Williams’s approach in his Descent of the Dove: A Short History of the Holy Spirit in the Church [Vancouver: Regent College Publishing, 2001]) that sees God working in and through the conflicts of history to achieve his purposes.

Three further chapters explore the crises provoked by the interaction of Scripture and Spirit in the ancient, medieval and modern paradigms. In the first case, Forster highlights the way in which early Christianity confronted the dualist and elitist hierarchicalism of the political-economic order of the ancient world with its radical anthropology insisting on the fundamental equality of each person before God. Forster then traces how an emphasis on remedying injustice and championing the poor gradually shifted during the medieval period from being about values that largely influenced individual and institutional practice, to the rise of a systematic reforming engagement with bodies of knowledge and social systems. In both scholasticism and humanism, Forster sees God at work confronting entrenched power and releasing ordinary people to create, learn, grow enterprises and develop scientific knowledge. The explosive economic growth of the modern period is characterised as one of the most dramatic changes in human history. Forster is even-handed in acknowledging the contributions to this growth of the various streams of medieval thought and reform, and highlights both the enormous benefits of dynamic growth and yet also the costs, particularly in terms of social and relational breakdown.

A final chapter focuses on the idolatrous nature of contemporary economic ideologies, particularly in the context of the collapse of shared moral commitments in late modernity. Both right- and left-wing idols of market and state are challenged, and readers are drawn to reflect on our fundamental dependence on God and others, as well as our responsibility to work to cultivate and protect God’s world.

This volume will prove an extremely welcome addition to the undergraduate reading list, and should take its place on core bibliographies for humanities and social science disciplines. The topic is not only central to a considered missional engagement with contemporary culture, but its treatment in this book is ideally pitched to frame the issues in missional terms. Moreover, Forster succeeds in illustrating this perspective in a manner that is characterised by a sustained political and theological balance.

The emphasis on a theological perspective does not mean that we jettison all of mainstream economics but rather that we resist both a neoliberal and a Marxist narration of economic institutions and objectives. Both the religious and the secular faces of humanism are given due credit in the birthing of the modern world. Both the market and the state are examined as idolatrous. Both the strengths and weaknesses of economic growth are acknowledged. As such, this volume meets two important needs. First it provides an accessible introduction to the subject area for the non-specialist. Secondly, by centralising an integrative biblical perspective on economics, it helps address the all too common tendency for Christians uncritically to baptise the competing narratives of left and right. By contrast, Forster’s book repeatedly challenges contemporary ideologies across the political spectrum from a theological perspective.

Nonetheless, because the book is introductory, important points are undeveloped or treated in ways that a specialist might deem unsatisfactory. In chapter 2, the section on hermeneutics is balanced and accessible, but given the subject matter one might expect more attention to be paid to the detail of Israel’s political economy. The Church’s sustained and robust thousand year plus ban on charging interest is dismissed rather too easily (pp. 65, 75). The reduction of globalisation to international trade (p. 94) is too simplistic. The role of the state is imagined largely in terms of government programs and interventions in the market (pp. 108–9) without acknowledgement of the state’s crucial role in assigning property rights and establishing contract law to underpin the existence and structure of markets in the first place.

But these quibbles are to be expected in an introductory text and do not detract from the book’s fundamental aim: to help Christian students think and act more biblically and worshipfully in regard to their own participation in the world of work and the economy. There are also some extremely helpful insights that guide readers to notice the centrality of work and family in the Bible’s creation account, and the centrality of materialist economics and hedonistic sexuality as twin contemporary idolatries in the secular paradigm. The overriding strength of this book is the way that it focuses the reader on the challenge to address these idolatries in the coming generation in faithful, winsome and life-giving ways.