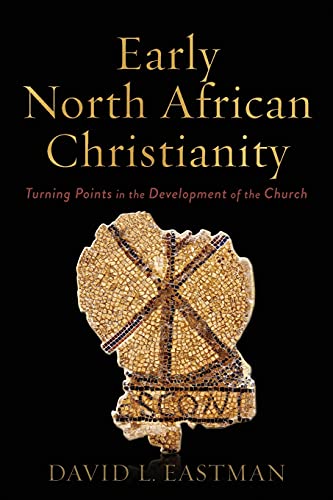 Early North African Christianity: Turning Points in the Development of the Church

The reader or browser who takes up David Eastman’s Early North African Christianity will readily call to mind another book of a similar title by Thomas Oden (d. 2016), How Africa Shaped the Christian Mind (Downers Grove, IL: IVP Academic, 2007). Beyond the common geographical reference, there is a basis for associating the two titles. In beginning this new volume, Eastman acknowledges happy past associations with Oden.

Eastman’s Early North African Christianity is distinguishable from the earlier work, especially by its more specific geographic focus upon the territories that today make up Libya, Tunisia, and Algeria. This territory, some a corner of the Roman Empire and some Berber tribal areas, was linked to Mediterranean Europe by government and commerce. Polite inhabitants used Latin, but there were also regional languages. This region was the theater in which stirring examples of heroic early Christian martyrdom unfolded, the “launching pad” of impressive efforts in early Christian theology, and the scene of important early Christian disputes.

It becomes evident that Eastman has taught this material repeatedly in various classrooms. Now the professor of Bible in Chattanooga, Tennessee’s noted McCallie School, Eastman shows that with years of experience, he knows how to communicate fairly complex material to a student audience still finding its way in early Christian studies. It is, in many ways, a model of how such instruction can be done with a combination of gravity and a light touch.

The book has five focuses, each occupying three chapters. Narrative is provided about the five: (1) Perpetua and Felicity, early North African Christian martyrs; (2) Tertullian and (3) Cyprian of Carthage, both theologians of note; (4) the Donatists; and (5) Augustine. Each such narrative is supplemented by analysis of the martyr-records, select theological treatises, and called consultations produced in connection with these great lives.

The evaluator of what Eastman has written is confronted with paradoxes: the book constitutes a popular exposition of what is, in fact, a specialized subject. As well, this handsome paperback—by its focus upon one corner of a continent and one portion of an Empire—cannot support an entire course on early Christianity. And while it obviously represents a distillation of vast reading, the virtual absence of reference notes means that the reader is left to guess what the writer has grappled with in reaching his conclusions (a difficulty not addressed by the inclusion of a final list of suggested readings).

As for the theological perspective displayed in Early North African Christianity, it is one that is broadly orthodox, enabling this book to be read with confidence in a wide range of settings. The reviewer did look for greater readiness to identify and name embellishment for what it is in the clearly embroidered martyr stories of Perpetua and Felicity (ch. 2). He noted with gratitude the highlighting of the non-subservience of Tertullian and Cyprian to Roman bishops who were too eager to extend their sway beyond Rome to North Africa (chs. 5 and 8). He wondered whether Tertullian’s flirtation with Montanism was taken seriously enough. He was glad to see it noted that Augustine’s teaching on grace gained new popularity in the era of Protestant reform (chap. 16) but wondered why this teacher’s medieval disciples were passed over—as if to suggest that Augustine had been forgotten for a millennium.

Early North African Christianity, in sum, is briefer, more geographically specific, and more an exposition than an investigation than I hoped to find. But it is of very good quality, and it leaves this reviewer hoping that it will either soon have a companion or be subsumed in a larger, more fully documented work that could serve as a text for a semester-long course.