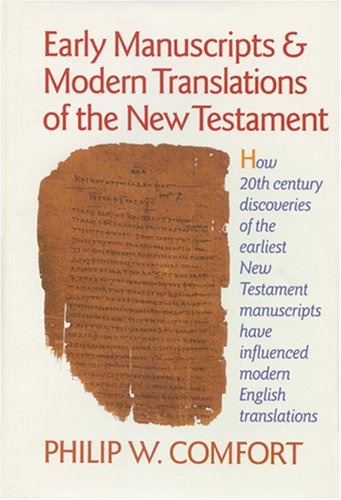 Early Manuscripts and Modern Translations of the New Testament

The main aim of this book is to study the way in which discoveries of early NT papyrus manuscripts (MSS) have influenced modern English translations (ETs) of the NT (particularly asv, rsv, nasb, neb, niv, tev, njb). It consists of four sections.

Section One (24 pages) consists of an introduction to early NT papyrus MSS: a brief and helpful treatment of various issues in NT textual criticism, dependent on the work of Metzger, the Alands, Roberts, Turner and Epp. Comfort takes care to emphasize that the Egyptian papyri should not be regarded as atypical, but ‘present a fair sampling of what might be found in early papyri all over the Graeco-Roman world’ (p. 11). He then discusses the way in which MS discoveries have influenced editions of the Greek NT—their importance was always recognized and has steadily influenced the standard editions (Comfort misses the exhaustive study by J.K. Elliott, A Survey of Manuscripts used in Editions of the Greek New Testament (NovTSS 57; Leiden: Brill, 1987)).

Section Three (108 pages) is a discussion of the relationship between the early MSS and recent ETs. The author discusses ‘all the passages from Matthew to Revelation in which the early MSS have had a significant influence on modern English translations of the NT’ (p. 77). For each passage (chosen if significant variation occurs in both ETs and MSS), an English rendering of the variants with support (both MSS and ETs) is presented, followed by discussion (of varying length). This is another catalogue, and is too extensive to comment on here (approximately 280 passages in total are discussed). It is notable that Comfort generally does not cite the early versions or church fathers in his discussions.

Section Four (24 pages) offers some concluding observations concerning the effect on ETs of papyrus MSS. The rsv translators followed Nestle’s seventeenth edition (1941), and therefore had access to MSS published to that date, but introduced only twenty new readings; the nasb used Nestle’s twenty-third edition (1957), including only five new readings; the Niv used Nestle’s twenty-fifth edition (1963) and UBS first edition (1966), introducing another fourteen new readings. The primary conclusion is straightforward: the MSS have made significant impact upon recent ETs. In closing Comfort suggests further alterations (in total he advocates 115 alterations to the text found at the beginning of the twentieth century).

The book closes with a bibliography, and several pleasing photographs of MSS discussed in the book. This book is well presented, and of considerable interest. A great deal of material has been gathered within its covers, and many discussions are presented in such a way that those without Greek can follow the argument. The overall thesis seems indisputable, although on individual passages the arguments are sometimes contestable, and the implicit assumption that Versions and patristic citations can be disregarded is a little frustrating.