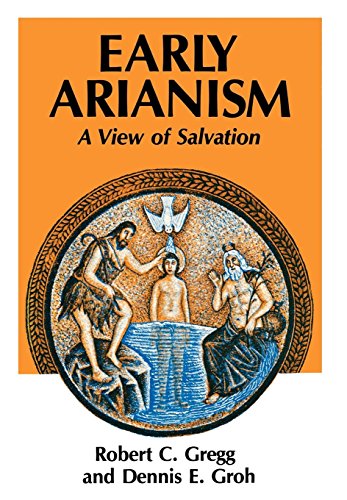 In a lecture a few years ago Professor Henry Chadwick expressed the view that of the major heresies of the early church Arianism was least likely to be represented in his audience. And those who today study Arianism do tend to find it a remote and unattractive heresy. However, Gregg and Groh suggest a missing emphasis in contemporary interpretations of Arianism which would undoubtedly give the Arian controversy more contemporary interest.

The traditional understanding of Arianism has located its centrifugal point in its doctrine of God. The Arians took such a view of the uniqueness of the supreme being and of his being uncaused and without beginning that they had no place to rank the Son of God other than among the creatures. For their part, Gregg and Groh would argue that far from derogating the Son of God, the Arians had a distinctly christological interest. The life of the incarnate Christ attracted them as an example of that moral progress which was to be pursued by all the saints. For according to the Arian view, God’s chosen one possessed sonship not by some natural tie, but by dint of his performance as an obedient creature and by dint of God’s grace, which both anticipated and rewarded his efforts. The moral endeavour and progress which Christ demonstrated could in principle be repeated by other creatures.

At the outset it should be stated that Gregg and Groh confine their reinterpretation to early Arianism, by which they mean Arianism prior to 342 or more precisely the writings of Arius, Asterius the Sophist, and Eusebius of Nicomedia. (These are the three main opponents whom Athanasius attacks in his Orationes contra Arianos, though they by no means represent the whole of the Arian party in this period.) Gregg and Groh recognize that their reinterpretation opens up a wide gulf between early Arians and later Arians, particularly the radicals associated with Aetius and Eunomius—although Philostorgius, the historian of the latter group, viewed the whole tradition as a unity. This gulf would become especially significant on the question of the Son’s mutability. For later it was standard Arian teaching to state that God had in his Son created one being who is incapable of change.

A letter of Bishop Alexander, Athanasius’ predecessor in the see of Alexandria, and Athanasius’ own remarks in the Orationes contra Arianos, do imply that some Arians at an early stage affirmed that the Son was a mutable creature whose sonship was a reward for his obedience. But such a view cannot have been uniform even for the period with which Gregg and Groh deal. Arius himself in letters both to Bishop Alexander and to Eusebius of Nicomedia described the Son as ‘unalterable’ (analloiotos), while Eusebius of Nicomedia wrote to the same effect in his sole surviving letter. These documents, which all predate the Council of Nicaea, suggest that the Arians quickly discarded the idea of Christ’s mutability. And if they could readily do so, it is hardly likely that the Arians were primarily interested in Christ as an exemplar of moral progress.

This impression is confirmed by careful examination of Bishop Alexander’s letter. Here the Arians are presented not as appealing to Christ’s mutability as a first principle, but as deducing this from his being a creature—an understandable stance given the Greek tradition which made sin almost an inevitable consequence of creaturely finitude. It would have been in that historical context a bold move to affirm a creature who was free of the possibility of moral change, but in time the Arians did not shrink from such an assertion.

Again, it is noteworthy that even the Arian position as represented by Bishop Alexander did ascribe an exceptional standing to Christ, since God had chosen him above his fellows. (This is unlikely to represent a distortion by Bishop Alexander seeing that it follows from careful exegesis of Ps. 45:7.) This emphasis would undermine further the suggestion that the Arians were motivated by a concern to keep Christ as an exemplar for others. Indeed, it is Bishop Alexander who draws the conclusion that if Christ attained his sonship in the way suggested by the Arians, then in principle others could emulate him. I can detect no definite hint that the Arians themselves were particularly interested in this conclusion.

Gregg and Groh rely heavily on Athanasius’ Orationes contra Arianos, which reveal his own soteriological concerns. They are right to see widely different soteriological implications in the Athanasian and Arian positions, but it does not follow that soteriology took on the same significance in both systems. For a parallel we might look to Islam, which has many similarities to Arianism as traditionally understood. Soteriological factors in Islam do not loom as large as in evangelical Christianity with its more pessimistic view of man’s natural condition. The very silence of our sources on Arian soteriological assertions may not constitute the strongest evidence, but it does suggest that here Arianism may parallel Islam. Though I must dissent from the major thesis of this book in preference for the more traditional interpretation, Gregg and Groh present much of value. It is particularly refreshing to note their concern to explain the controversy in the light of exegesis of key biblical texts rather than to rummage around for philosophical borrowings. The book is at its best in elucidating Athanasius’ standpoint, but the Arian counter-soteriology which Gregg and Groh develop is less securely based. Readers will also find some useful insight into the ascetic background in Egypt to the controversy, but it should also be remembered that the origins of Arianism were not exclusively Egyptian. Eusebius of Nicomedia cuts an ascetic figure!

Scholars naturally hanker after some clarification of the soteriological outlook of the early Arians. Gregg and Groh have made a valiant attempt here, but this must remain at best speculative. If we are to locate a soteriological interest in the Arian family, I suspect that a better starting-point would be found in the Illyrian Arians studied by Michel Meslin in Les Ariens d’ Occident 335–430. In that tradition at least more positive value was attached to the obedience of the Son than in the Greek tradition where obedience had little standing as a virtue.

Battling for the Bible—then and now

The contemporary relevance of Christendom’s creeds

by Bruce A. Demarest

Dean Burgon and the Bible: an eminent Victorian and the problem of inspiration

by Donald Dean Smeeton
VIEW ALL VIEW ALL

The Language and Imagery of the Bible

Redating the Exodus and Conquest