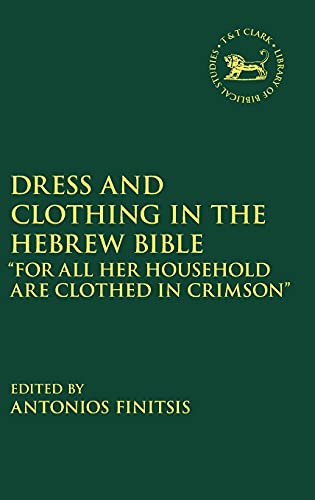 Dress and Clothing in the Hebrew Bible: “For All Her Household Are Clothed in Crimson.”

What we wear makes a statement about who we are. In the ancient world particularly, one’s dress served to mark status, character, role and emotional state. It is strange, then, that when the Bible tells us how people are clothed and adorned, so little attention has been paid to this aspect of Scripture. This book by a team of scholars from a research group of the Pacific Northwest regional meeting of the SBL makes a helpful contribution to address this lack.

Scholarly books of collected essays on a theme are often a disparate aggregation of vaguely related topics. Not so this volume edited by Antonios Finitsis. The contributors workshopped their thinking over a three-year period before honing their contributions, which results in a more coherent corpus, with frequent interactions with one another’s chapters.

As several contributors observe, Hebrew narrative, unlike say a Jane Austen novel, is short on descriptions of appearance. Where we have indications of how the characters are clothed, and particularly when they effect costume changes, these are not mere padding but are integral to the depiction of character or plot development.

Finitsis introduces the volume with the customary digest of the ensuing chapters and outlines the processing and significance of the crimson dye of the book’s subtitle. Following this, the book is bracketed by chapters on the rare mentions of divine clothing imagery. With a helpful discussion of Hebrew clothing vocabulary generally, Shawn Flynn writes on God’s flowing robes as envisioned in the temple scene of Isaiah 6, and God’s majestic radiance in the kingship psalms (ch. 1). A careful correlation of textual references in Mesopotamia and iconographic depictions results in a rich wardrobe against which to set these accounts of YHWH’s divine splendor. Ehud Ben Zvi’s concluding chapter wrestles with why, when anthropomorphic language of God abounds, there is so little said about his attire (ch. 8).

Carmen Imes writes on the character and function of the priestly regalia (ch. 2). This is the one area that has previously been explored in some detail, though in part by those who are inclined to over-read the symbolism.

Joshua Spoelstra discusses the accessories (rosettes, tassels) to Israelite clothing (ch. 3). While there is a wealth of comparative material and insights here, I remained unconvinced that their function is to be seen as apotropaic.

Sara Koenig presents a close reading of the two Hebrew Bible narratives where a woman by the name of Tamar is central, Genesis 38 and 2 Samuel 13 (ch. 4). While both of these passages have been well worked over, Koenig brings them into relation with each other in fresh ways. There is a focus on the role clothing plays in the characterization and plot development of each story. In each case, Tamar’s clothing, and what is done to it, highlights the injustices perpetrated against her. The changes in the women’s dress communicate their protests against their mistreatment and are designed to effect a sort of “liberation” (though I wonder about the appropriateness of this word for the 2 Samuel Tamar). Koenig’s treatment is generally insightful and gives particular attention to how each narrative fits in its wider context.

Sean Cook notes the apparently disproportionate judgment on Israel’s first king, Saul, and proceeds to show how the writer of 1 Samuel uses descriptions of Saul’s clothing and armor to “Other” him; that is, to depict him as more like one of Israel’s enemies, a Philistine, rather than an Israelite (ch. 5).

Ian Wilson compares the two accounts (2 Sam 6; 1 Chron 15) of David’s dancing before the ark, with their differing descriptions of his attire (ch. 6). Wilson draws on the ANE background on the king’s relation to the cult and what was considered appropriate regal attire for ceremonial state occasions. Recent developments in cognitive psychology (how we foster forgetting) are invoked as a rationale for the Chronicles account—to downplay the fact that Michal, Saul’s daughter and David’s wife, may have been correct in her assessment of David’s behavior, while still being critical of her. While this is a helpful comparison, one wonders if Wilson has sufficiently considered the possibility that the writer of Samuel, in his description of David’s humbling/humiliating himself before YHWH, is critiquing ANE perspectives and suggesting where true honor lies. Wilson is right, however, to draw attention to the ambiguities of the narrative and, in particular, the cause of Michal’s barrenness.

I found particularly rich the discussion by Scott Starbuck of the Isaianic metaphor of reclothing in a “robe of righteousness” (Isa. 61:10; ch. 7). This represented a democratization of royal and priestly garb for the remnant of Yehud after the exile. Though the vocabulary is different, a comparison with the similar reclothing of the high priest in Zechariah 3, also marking a change of status for the returned community, would have been instructive.

There is much more that could have been explored. I had hoped for an account of the garments and accessories of the wealthy women of Jerusalem in Isaiah 3. But, as the editor says, the book does not aim to be comprehensive. It is to be hoped that this exploration prompts further peeks inside the wardrobes of ancient Israel.