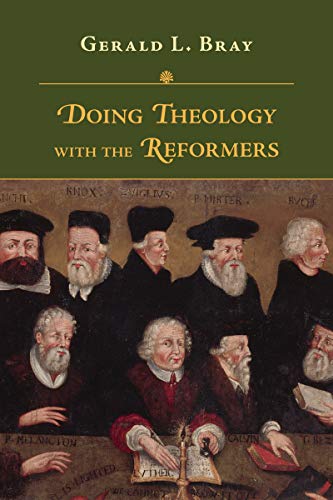 Doing Theology with the Reformers

Bray’s Doing Theology with the Reformers is intended to serve as a companion volume to the Reformation Commentary on Scripture. However, it deserves a wider readership than that purpose implies. Bray has produced an excellent overview of the thought-world of the Protestant Reformers, helping readers to make responsible and sympathetic use of their exegetical and theological insights.

When I was an undergraduate student studying theology, I often found that a brief conversation with a good teacher could teach me more than I could learn in several hours of reading. Rarely does this direct, conversational style come across in print, but Bray comes as close as any to achieving it. This book is a pithy, straightforward orientation to Reformed thought by an experienced theological historian and teacher. It mostly appeals to primary sources and is relatively uncluttered by footnotes. Thus, generalizations abound. It mostly focuses on a familiar cast of characters: Luther, Calvin, Bucer, Zwingli, Bullinger, Wyclif, Tyndale, and Cranmer. This is a book designed to communicate the overall contours of Reformation thought. That said, Bray’s knowledge of the details is clear throughout and makes for rich descriptions of events.

Bray is sensitive to the dangers of hagiography and presents the Reformers’ views and actions as they were. There is not the defensiveness that sometimes characterizes those who feel the need to defend their heroes. Bray likewise presents Roman Catholic and medieval doctrines fairly and respectfully.

The book contains six chapters, each of which introduces an aspect of Reformed thought. Chapter 1 briefly describes the political changes of the era and the revolutionary significance of the printing press, which turned manuscripts into standardized, distributable texts, and enabled new use of vernacular languages in theology. Bray’s discussion of how Latin functioned in the scholarship of the period is especially important given that this is something that newcomers to the field often find perplexing about these pastorally minded Reformers. As Bray explains, they were men ‘caught between two worlds’, that of university academia and the uneducated masses whom they sought to evangelize (p. 6).

Chapter 3 discusses biblical interpretation, covering issues of canon, the relationship between Old and New Testaments, the emergence of systematic theology, and the new Reformation emphasis on predestination. This chapter usefully highlights the contrasts between Reformed theology and the theological emphases that had preceded it, particularly in the shift from a philosophical focus on the being of God to a biblical focus on the acts of God, primarily understood in legal and juridical categories.

Chapter 4 discusses the work of the Holy Spirit, narrating the crucial shift from medieval emphases on the transmission of quantifiable sacramental grace to justification and personal renewal by the Spirit. This chapter also discusses the Reformers’ difficulty in finding sacramental agreement among themselves, and their central emphasis on justification by faith alone.

Chapter 5 discusses the political and social context of the Reformers. So often the Reformers are quoted as though their ideas existed in a social and political vacuum, to which this chapter provides an important remedy.

Finally, chapter 6 provides an overview of Lutheran and Reformed confessional developments in the early modern period, along with a sober assessment of their emphases and how modern Christians ought to respond to the issues they raise.

This is an excellent book, but it exhibits a few shortcomings. One disappointment was the imperfections present in the list of ‘Works Cited’ (p. 267–70). For example, Thomas Watson is cited as an example (p. 19) but does not appear on the list. Furthermore, the list of secondary sources includes works by Aquinas, Augustine, Calvin, and others alongside genuinely secondary works.

More broadly, the book could be improved by including a list of ‘further reading’ at the end of each chapter. Here one of the strengths of the book—namely its terse, insightful description of complex events and ideas—simultaneously becomes a weakness. Bray’s prose is mostly free of footnotes and tangents, which aids readability but gives the interested student little direction on how to further investigate the issues raised.

Occasionally this becomes a frustration when the reader finds themselves disagreeing with Bray’s descriptions. For example, Bray erroneously portrays supralapsarianism and infralapsarianism as concerned with the proper temporal, rather than logical, relationship of God’s decrees, and thus as expressing complementary truths rather than competing predestinarian schemes (p. 256). Hypothetical universalism is mischaracterized as a view that suggests that human beings can thwart God’s will and is quickly dismissed (p. 134–35). At such points the lack of appeal to secondary sources or footnoted justifications for these assertions becomes a genuine shortcoming of the book. One could also quibble about what ought to have been included at various points of Bray’s narratives. I would have liked to have seen Cranmer’s attempt to call an international Reformed church council discussed in the section on conciliar authority, for example (p. 73–79).

These shortcomings notwithstanding, this is an excellent book that deserves a wide readership. It is clearly written and effectively orientates readers to sympathetic engagement with the thought of the Protestant Reformation. Teachers of Reformation history and theology should strongly consider adding it to their course reading list. Likewise, pastors ought to consider reading it as a refresher on Reformation theology, or else to grow in appreciation of those who went before them.