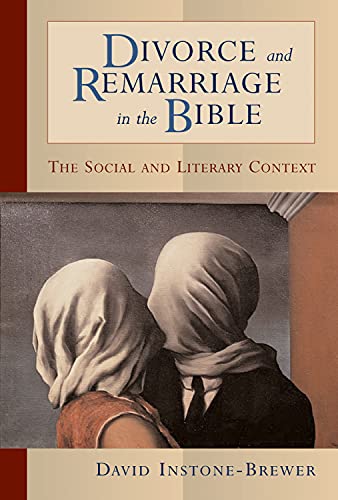 DIVORCE AND REMARRIAGE IN THE BIBLE: THE SOCIAL AND LITERARY CONTEXT

When, if ever, is divorce permitted? Is remarriage permitted after divorce? Traditionally, the Roman Catholic Church has maintained that marriage is a sacrament and thus indissoluble. Death alone can dissolve a marriage and permit remarriage. In recent years, this position has been forcibly argued by Gordon Wenham and William Heth (Jesus and Divorce, 1997) and Andrew Cornes (Divorce and Remarriage, 1993; Questions about Divorce and Remarriage, 1998). They have rejected the protestant and reformed view that (broadly) allows divorce after sexual infidelity or desertion, and remarriage at least for the ‘innocent’ party (if not for both). The Wenham / Heth / Cornes view has gained ground in recent years, especially in some Anglican circles. It places all those who have remarried after divorce in an adulterous relationship and therefore the pastoral implications are huge.

Dr Instone-Brewer performs a scrupulously researched, scintillating and persuasive demolition job on this traditional and sacramental view. His starting point is a study of the contractual obligations that were fundamental to Jewish marriage. It was basic to the marriage contract that a husband should provide his wife with food, clothing and love (i.e. marital rights). For her part the wife was expected to prepare meals, make clothing, and fulfil marital rights. It was universally understood that failure of either partner to fulfil these basic obligations constituted a legitimate ground for divorce (and thus remarriage). Later on the rabbis might argue endlessly about other grounds for divorce, but these three were never in dispute. Even a slave wife had a right to food, clothing and conjugal love; and if her husband took another wife and failed to deliver in these three areas, she could ‘go free without any payment of money’ (Exod. 21:9–10). Instone-Brewer demonstrates convincingly that this meant that she was free to divorce and remarry.

When we come to the NT, Instone-Brewer constructs a convincing case to show that both Jesus and Paul were familiar with, and would have accepted, the basic OT grounds for divorce. Both sides in the Pharisaic controversy acknowledged that marriage partners were free to divorce if the basics of food, clothing and marital love were denied. Controversy only arose over a fourth, disputed, ground for divorce: that cited in Deuteronomy 24:1 (often translated ‘something unclean’). Did this refer to sexual infidelity alone? Or did it have wider reference? Here lay the fierce dispute in Jesus’ day, and this was the point brought to him in an effort to catch him out in Matthew 19 and Mark 10. His questioners would not have asked him about divorce on the grounds cited in Exodus 21:9–10, as all alike took these for granted. Similarly, when we look at 1 Corinthians 7, it is inconceivable that Paul, with all his training as a Pharisee, was unaware of the assumption that there were three universally accepted grounds for divorce, and only one disputed ground.

Instone-Brewer concludes that while Jesus and Paul condemned divorce without valid grounds, and while they discouraged divorce even when there were valid grounds, they both accepted the OT teaching that divorce was allowed for adultery, neglect or abuse. Both Jesus and Paul condemned remarriage after an invalid divorce, but allowed it after a valid divorce. The biblical teaching was left behind when the early church lost sight of the Jewish background to NT teaching, and imposed a rigorously ascetic ethic (which, for instance, sometimes went as far as to condemn remarriage after the death of a spouse). When the Roman Catholic Church developed a ‘sacramental’ (i.e. indissoluble) interpretation of marriage, the biblical teaching that God permitted divorce as a provision for living in a fallen sinful world was lost. Instead, there was the absurdity of having to search for reasons to ‘annul’ marriages (i.e. pretend they had never taken place).

This book is essential reading for anyone concerned to develop a biblical understanding of divorce and remarriage. The author presents the fruits of many years of research in a clear, gripping and enjoyable way. The major problem with his case is that it is difficult to present it on the basis of Scripture alone, without a thorough background knowledge of Jewish literature. Another recent and scholarly book on the subject, which comes to a similar conclusion but along a different route, does take issue with some of Instone-Brewer’s arguments (Clark, Putting Asunder, 1999 pp., 205–209). Overall, however, Instone-Brewer’s thesis is convincing, and will need a substantial response from those who deny any biblical grounds for divorce and remarriage. At present, unless convincingly refuted, it stands as a strong challenge to the very hard line attitude towards divorce and remarriage that is increasingly influential in some conservative evangelical circles.