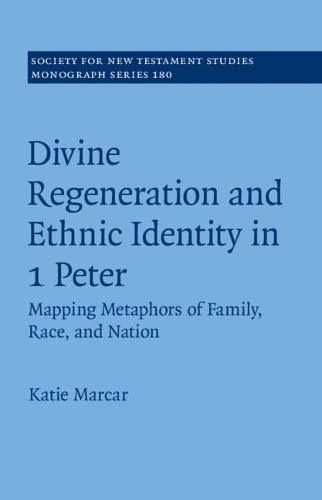 In this monograph based on her Durham University doctoral research, Katie Marcar contends that in 1 Peter, “the ascription of believers’ ethnic identity in 2:9–10 is founded on the complex metaphor of divine regeneration and its familial entailments” (p. 1). Her work especially seeks to advance Petrine scholarship past four “pitfalls” that characterized past studies of regeneration in 1 Peter: (1) being too broad in scope; (2) over-harmonizing 1 Peter with the Gospels or Pauline Epistles; (3) speculating about background influences; and (4) “not fully appreciat[ing] the gendered aspects of the Petrine imagery” (pp. 3–4). To accomplish these things, Marcar adopts “a fresh methodology” combining the sociological study of ethnicity with metaphor studies in order to apply them to 1 Peter (p. 6).

The first two chapters situate this book within these two fields, respectively. Applying sociological insights on ethnicity to 1 Peter is appropriate because “within the New Testament, Christians are explicitly described as an ethnic group only in 1 Peter” (p. 7). Based on the previous work of sociologist Anthony Smith and its application to 1 Peter by David Horrell, Marcar provides a robust definition of ethnicity so that she may argue, “1 Peter casts Christian identity in terms of ethnicity, and divine descent [regeneration] is the cornerstone on which this construction rests” (p. 14). Marcar’s argument, then, is two-pronged: (1) Christians are of a distinct ethnicity in 1 Peter, and (2) divine regeneration is the source of Christians’ distinct ethnicity. Divine regeneration in 1 Peter is what requires Marcar to use metaphor studies, since spiritual regeneration uses physical generation metaphorically. A metaphor “transfer[s] meaning from a source domain to a target domain” (p. 30). Marcar identifies metaphors related to ethnic identity in 1 Peter by following the Pragglejaz Group’s Metaphor Identification Procedure (MIP), the first step of which is to “read the entire text-discourse to establish a general understanding of the meaning” (p. 45). She thus provides her interpretation of 1 Peter in chapter 3. Then, in chapters 4–7, she interprets ethnic identity metaphors in 1 Peter “within their textual, linguistic, cultural, and theological context through a robust historical-critical study of Jewish and early Christian traditions” (p. 32).

In chapter 4, Marcar first defends her thesis that divine re-begetting gives Christians a new ethnic identity, based on divine regeneration, which is prominent in 1 Peter 1:3–5. Marcar develops Paul Achtemeier’s insight that “rebirth and rebegetting are different concepts; one is gendered feminine, the other masculine—1 Peter speaks of divine begetting, not divine rebirth” (p. 64). Divine begetting importantly portrays God as Christians’ Father. With God as Father, Christians have an ethnicity distinct from non-Christians, who do not have God as Father. Marcar helpfully points out that divine regeneration is a concept unique to New Testament documents among Second Temple Jewish texts: “God never re-begets anything in pre-Christian Jewish literature” (p. 65). Within the New Testament, Peter shares a theology of divine regeneration with Johannine literature (pp. 86–100). In 1 Peter 1:3, Jesus’s resurrection is the basis of divine regeneration, whereby God becomes the Father of Christians. The Fatherhood of God gives Christians an incomparable inheritance.

Chapter 5 investigates the importance of God’s seed begetting Christians anew in 1 Peter 1:23–25. The specific term for seed, σπορά, “is unusual,” but may be present because “σπορά makes a theologically loaded pun with διασπορά,” (p. 153). This wordplay reinforces Marcar’s claim that divine regeneration has ethnic implications.

Chapter 6 studies the narratival metaphor of growth in 1 Peter 2:1–3. Having been begotten anew, Christians should “like newborn infants, long for the pure spiritual milk, that by it you may grow up into salvation” (1 Pet 2:2 ESV). These verses illustrate how “some complex metaphors can imply a series of events, or narrative” (p. 41). They also illustrate that the gender of a metaphor’s source domain need not match that of its target domain. God is masculine, but these verses apply feminine imagery to him metaphorically. Marcar shows that the application of feminine imagery to God is not unprecedented in Jewish literature prior to 1 Peter. Furthermore, “the act of breastfeeding had ethnic implications,” so these verses support Marcar’s argument that by divine regeneration, God has given Christians a new ethnic identity (p. 170).

In chapter 7, Marcar’s argument climaxes with the culmination of the first half of 1 Peter in 1 Peter 2:4–10. In these verses, Peter progresses from describing Christians as God’s household, to God’s house (that is, temple), to God’s people. “Christian identity has many of the markers of ethnic identity, but this is a special kind of ethnic identity seen through the prism of election, holiness, and divine relationship” (p. 231). The culminating nature of 1 Peter 2:4–10 leads naturally into the synthesis that Marcar provides in chapter 8. She distills her investigation of metaphors contributing to Christians’ new ethnic identity in 1 Peter into three “systematic metaphors.” First, “Christian membership is belonging to a sojourning nation.” Second, “Christian membership is being begotten anew and growing up in God’s family.” Third, “God’s family is an ethnic group” (p. 263, emphasis removed).

Much commends this monograph. Marcar succeeds in substantiating her primary argument: “the divine regeneration metaphor is at the heart of 1 Peter” (p. 259). She has explicated its prevalence in the letter’s first chapter (1 Pet 1:3–5, 22–25) and the implications of it, which Peter explores in 1 Peter 2:1–10. Her first two chapters on the sociological study of ethnicity and metaphor studies are apt introductions to those vast fields and accessible for her primary audience, New Testament scholars. Her proposed structure for the body of 1 Peter into two “halves,” 1:3–2:10 and 2:11–5:11 is convincing. Her exegesis of texts in 1 Peter is even-handed and erudite.

Despite these strengths, the book does have one pertinent weakness: it neglects the development of ethnic identity metaphors in 1 Peter 2:11–5:11. Such is understandable given Marcar’s focus on divine regeneration as the controlling metaphor (and divine regeneration is most prevalent in 1:3–2:10), but Marcar occasionally suggests that her book’s scope will include 1 Peter 2:11–5:11 (pp. 61, 259). She does include ten family metaphors from 1 Peter 2:11–5:11 in figure 8.1, but she does not develop most of them to any degree (pp. 256–57).

This weakness, nevertheless, does not detract from this book’s value to New Testament scholars. Any future studies of 1 Peter 1:3–5, 22–25; and 2:1–10 must interact with Marcar’s exegesis of these texts. Similarly, any future work on metaphors in 1 Peter or other New Testament text, which were outside the scope of this monograph, will find it a helpful resource and dialogue partner.