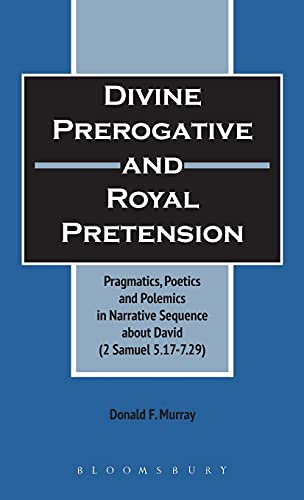 Murray’s extensive close reading of 2 Samuel 5:17–7:29 focuses on literary interpretation and on expounding how a royal political ideology promoted by David clashes with a more basic prophetic world view.

Murray’s thesis is that the polemical rhetoric of the section polarizes David and Yahweh in their opposing views on royal rights and divine authority in relation to the temple and the dynasty. After introducing methods and perspectives, and delimiting the unit of study (ch. 1), Murray comments on text criticism and linguistic issues (ch. 2). Three middle sections are verse by verse readings of each chapter (chs 3–5,) which are then neatly summarised around the opposed notions of king (melek) and leader (nāgîd) (ch. 6). Murray then presents comparative ANE texts dealing with the role of kings in temple-building as a transtextual context (ch. 7) and then the view of kingship and leadership in Samuel as an intratextual context (ch. 8). All is sharpened in a final reflection on the supreme mediacy of the prophetic word (ch. 9).

The monograph reads exceptionally well as a commentary and as an ideological attack on any attempt at temple-building. The treatments of royal ideology and leadership are pearls in their own right. The language is beautiful and non-technical, with wordplays on Derrida’s key terms différence and déférence. At the same time, deconstruction is simply dismissed as counter to communication (21 n. 5). This last point well illustrates Murray’s style; with technicalities summarised in helpful figures or relegated to footnotes. The advantage is that he communicates extremely well, the disadvantage that one is completely at his mercy. Murray could be much more informative, but never breaks his delightful flow of language to prove it.

My greatest disappointment is that the title led me to expect an informed discussion of pragmatics and how it differs from literary readings. But Murray simply footnotes 4 key works on pragmatics (20 n. 4, cf. 116 on Blakemore), and one has to read his commentary to get some understanding of his use of terms like performative (70, 185), implicature (21–34, 191, 291, 300 etc), context (118), cohesion (191), indirection (169), topic (172). Despite a glossary of technical terms (317–19) and an extensive index, this is a long way from a proper introduction to these terms. Murray seems well-read in pragmatics, but he hides it well!

The same problem pertains to the lack of interaction with other scholars in the commentary. This results in a stream-lined interpretation, with David in a bad light in 2 Samuel 6–7a. Those with misgivings about an almost Hegelian reading in terms of thesis (5), anti-thesis (6–7:1 ff.) and synthesis (7:5 ff.) are not afforded an alternative. It is interpretation as hit and run, albeit in a stylistic slow motion. It bothers me that he has to erase 7:13 to make his interpretation work (198). Messianic theology is not treated at all.

In sum, the monograph is very well written and has many superb readings helpful to the average student. Due to the neglect of scholarship on pragmatics and interpretation, it is primarily useful for the literary reading of 2 Samuel, where it has its own polemical voice against David and the temple.