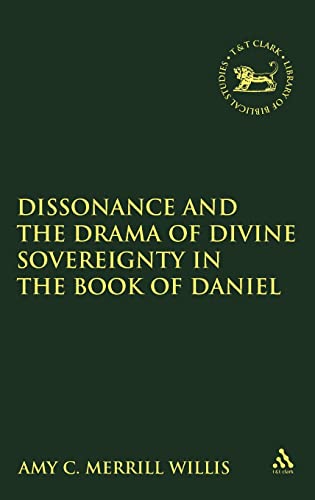 The church's beloved book of Daniel is often cited for its well-known stories with the book's plentiful visions left aside only for end-times discussions. Amy C. Merrill Willis studies these visions and angelic discourses, resulting in a reading of divine sovereignty as a drama during foreign rule.

Chapter one details her premise and sets her agenda for the remainder of the study. She limits the study to the visions and angelic discourses found in 2:31-45 and chs. 7-12. Sovereignty is a well-recognized theme in Daniel but challenges the theodicy construct as an inadequate explanation of the ancients' view. The visions are the presence of God during this period, and he is described with theologically and ideologically significant forms and even a human-like appearance at points. The final difference in this approach is the attempt to relate the social setting of the audiences and writers. Merrill Willis' view is similar to Danna Fewell's, but with a more in-depth look at the visions and the social setting. She relies on Jon Levenson's Chaoskampf work in Dan 7 but extends dissonance and an unfolding dramatic process of sovereignty to more visions of the book. The dissonance arises from a community that finds “themselves socially elevated but politically subordinated, aspiring to participate in cosmopolitan culture while committed to traditional Jewish faith and practices” (p. 21). These tensions that are present for the writers and readers are considered. This work reads the visions in Daniel as drama that “overcome[s] incoherence with respect to subordination and foreign power . . . enact[s] resistance to foreign rule, create[s] symbolic deliverance from that rule, and also legitimate alternative institutional models for divine power and presence” (p. 34).

Chapter two focuses on Nebuchadnezzar's dream in 2:31-45. Merrill Willis locates the writing of this section to the Seleucid period with its core purpose being to make sense of the subjugation of Israel to Gentile powers. She identifies three redactional levels but focuses on the later Seleucid period when the invisibility of God was disconcerting to the faithful Hebrews. The telling of this dream helped to make God visible into history. This argument from the vision is that God is present through the control of royalty and its divestment at God's will.

Chapter three tackles the key section of the book: the vision of the four beasts and the Ancient of Days (Dan 7). Merrill Willis sees two cycles of the beast vision with the second portion of the vision giving special attention to the little horn. She locates this redaction in the second cycle to the time of Antiochus IV. The first cycle of the four beasts seems to borrow from Canaanite Chaoskampf myths. Each action of the beasts is shown to be under divine control as shown by repeated passive voice verbs. Merrill Willis points out the absence of such language for the fourth beast signifying its larger threat. This threat requires a theophany to reassert divine sovereignty that parallels theophanies of Ugartic deities and other ANE cultures.

In Dan 8, the issue of its relationship to Dan 7 is at the forefront. She asks whether Dan 8 is a sequel or a remake. A prevailing view seems to be that Dan 8 is a remake or more precisely a midrash of Dan 7 accomplishing similar aims. She finds divergences from Dan 7 impacting time, space, and objects conveying symbolic meaning. Daniel 8 uses domestic beasts and presents the four kingdoms excluding Babylon and rulers without divine authorization with the pinnacle being Antiochus IV, the little horn. Tension builds through the repeated use of the verb to become great. Divine power appears absent as the tension builds. The resolution comes from hearing a time limit set for Antiochus IV's success (2,300 days). Also the “time of wrath” functions to show an ambiguous relationship of God and wrath towards his people. The resolution comes without hands (8:25) as the invisible and incomparable deity removes the little horn.

The final chapters follow the same trajectory exploring Dan 9 and 10-12. Merrill Willis sees Dan 9 as a cohesive section resolving the temple's destruction as part of God's punishment through abandonment. This fits within Deuteronomic theology. There is a continuation between the prior exile and the Seleucid occupation. Daniel 10-12 sets forth resurrection as a resolution to many of the issues in Dan 8. Resurrection rather than restoration of the temple becomes the hope and display of divine power. This final chapter also examines more closely the role of maśkîlîm (editors of Daniel). A key remark of the conclusion is that sovereignty instead of evil or persecution makes up the difficulties in the visions. She concludes that divine power is now located in the Jewish community and specifically the maśkîlîm. The visions of the book of Daniel are meant to contradict other claims of power and assert divine sovereignty.

Merrill Willis approaches the visions of Daniel with a well-developed lens acknowledging rhetorical forces and cohesion where possible while presenting plausible explanations for dating and historical circumstances of writing. Her conclusion regarding the maśkîlîm may warrant continued consideration for their place in Seleucid-era Israel. Her interaction with comparative literature and close reading allows her a contributing role to the discussions of Collins and Goldingay.