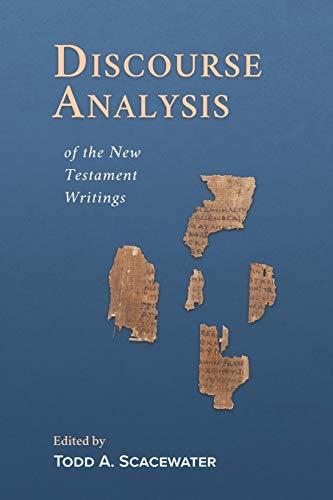 For the average Greek NT student or pastor without a linguistics background, discourse analysis can seem like learning the rules of an unfamiliar sport. Grappling with linguistic concepts like “coherence relations,” “semantic structural analysis,” or “action peaks” can appear as enthralling as the uninitiated absorbing the technicalities of test cricket or American football. Yet the ability to trace the linguistic structures in text and speech is crucial to the competent translation, exegesis, and teaching of the NT. Within this field, practitioners like Stephen Runge have previously sought to introduce discourse studies to the non-specialist NT Greek student, pastor or scholar (Discourse Grammar of the Greek New Testament: A Practical Introduction for Teaching and Exegesis [Peabody, MA: Hendrickson Publishers, 2010]).

A better understanding of discourse, Scacewater argues, “may help us to better understand texts as holistic entities (not as a linear sequence of sentences), to resolve exegetical problems, and to better discover communicative intent” (p. 4). Where traditional Greek NT exegesis privileges the close study of lexical meaning and syntax within a sentence, discourse analysis processes the biblical text beyond the sentence level to identify macrostructures (topics), microstructures (pericopes), and prominence (main themes, key thrusts)—whatever the exact method used. The exegetical potential of this kind of study for preachers and teachers is obvious—but how accessible are these tools for the non-specialist?

In the same way as watching or playing a new sport helps one understand its charm, the unique value of Scacewater’s work lies in its book-by-book demonstration of discourse analysis from a wide range of expert “players” such as David Allen, Stephen Levinsohn, Robert Longacre, William Varner, and Cynthia Long Westfall. The diversity of approaches, however, also results in an unevenness to the book when read chapter by chapter, akin to the experience of channel-surfing between different Olympic events. For example, the non-specialist may be confused when Scacewater and David J. Clark describe “Narrative/Discourse Blocks” in Matthew’s Gospel (pp. 31–62), while Stephen Longacre (a key “founding father” of NT discourse analysis) opts to outline Mark’s Gospel using “Episodes” containing “Didactic/Action Peaks” (pp. 63–90). Conversely, it is not always apparent how, for example, Cynthia Long Westfall’s treatment of Hebrews using “Systemic Functional Linguistics” (pp. 539–68) differs significantly from Ervin Starwalt’s use of “Semantic Structural Analysis” in 1 Peter (pp. 589–620), other than introducing a new set of terms and assumptions. This ultimately reflects the discipline’s current lack of standardization and its diverse origins from anthropology, structuralism, philosophy of language, and other disciplines (pp. 5–6). Nevertheless, stating each contributor’s adopted approach upfront, either in the table of contents or chapter headings (and perhaps a comparative table of key terms), would help the non-specialist more quickly grasp the approach underlying each book’s discourse analysis.

What of the exegetical payoff? Readers will find much in this book to enlighten their personal study, teaching and preaching of the Greek NT text. While not as comprehensive as full-length discourse analyses (which several of these chapters draw from), there are enough interpretive “a-ha” moments well worth the “cross-cultural” shock of immersing oneself into the discourse analyst’s world. For example, Scacewater’s division of Matthew as alternating “Discourse” and “Narrative” blocks helps readers to appreciate the Gospel as a deliberately-crafted account, and how individual scenes contribute to the dominant themes each major section (pp. 59–62). William Varner’s identification of James 3:13–18 as the discourse peak of the letter helps readers to appreciate James not as a collection of unrelated sayings, but as a concerted appeal to divine (not human) wisdom that sparks a lifestyle in keeping with being “a friend of God” (pp. 571–72).

One may quibble over certain assumptions or conclusions, such as whether “choice always implies meaning” when a biblical writer picks one connective over another (e.g., Stephen Levinsohn’s analysis of Galatians, pp. 297–330), or whether the absence of “formulaic” evidence still reflects a literary plan (e.g., Scacewater’s treatment of Matt 19:1 as the beginning of a new Act, p. 34). But this should not detract from the overall achievement of collating such a comprehensive set of essays in service of the church. Furthermore, each contribution is marked with a humility and modesty where the benefits of their analysis are not overstated or exaggerated, and presented with careful reference to the structural proposals of other commentators. The diligent student or pastor will find a treasure trove of well-reasoned linguistic arguments to better understand the overall structure, division, and purpose of each NT book. As a single-volume introduction to the application of discourse analysis of the NT, this collection succeeds admirably in its purpose.