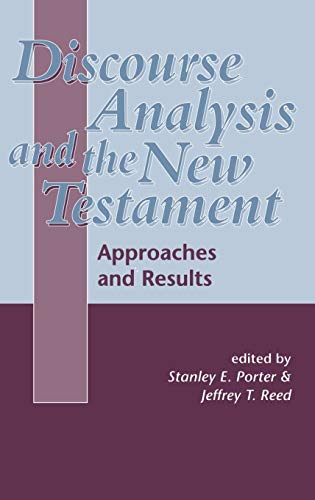 Stanley Porter has already edited a notable collection of essays on the subject with Don Carson Discourse Analysis and Other Topics in Biblical Greek: Sheffield: Sheffield Academic Press, 1995), and Jeffrey Reed has produced a major monograph on the topic, A Discourse Analysis of Philippians (Sheffield: Sheffield Academic Press, 1997; essentially a revision of his doctoral thesis at the University). It may come then as no surprise that the volume under review is not for the faint-hearted. It is not an introduction, but assumes a more general understanding of linguistics and a particular knowledge of Discourse Analysis (DA) itself—here largely identified with Text-Linguistics, rather than Pragmatics. The book seeks to illustrate four major different approaches to DA currently in use in NT studies: revised forms of Halliday’s, Systemic-Functional Linguistics; the colon-analysis and related approaches pioneered by J.P. Louw and the South African School; the Literary-Semantic Structure approaches to deliberative discourses and narrative analysis of SIL, and a broader trawl of ‘Continental’ approaches. The collection comprises a relatively brief methodological part (4 chapters), followed by 14 chapters offering samples of a range of the above DA approaches to the Gospels and Acts (Part II); the Pauline Corpus (Part III), and the General Epistles (Part IV).

The essays on theory and method in Part I, are strangely diverse and unrelated: a very brief and basic discussion of ‘the Role of Context’ in understanding Discourse’ (by Nida); a more comprehensive (and Hallidayan) account of what makes for ‘cohesiveness’ in discourse (by Reed); a response to the so-called ‘Critical Discourse Analysis’ of Fowler and others (by Porter, usefully illustrated by engagement with Philemon), and a creative look at machine-searchable ‘tagged texts’ and how they might be used in DA (by O’Donnell, largely using Jude).

The strength of the book lies in Parts II–IV, and in the way the individual contributors bring their different DA approaches to a range of texts, each choosing his or her tool for the job in hand. The bulk of the essays are on narrative (160 pages). Two, by Longacre, are devoted to the narrative macro-structuring of the episodes in Mark, as a whole, and to the finer complexities of 5:1–43 in particular.

Several other essays address how writers ‘foreground’ (= subtly emphasise) important aspects of the narrative, e.g. through use of historic present, imperfective and stative verbs, lexical repetition, ‘fronting’ and other departures from ‘neutral’ word-order, etc. Comparisons are perhaps odious, but I found the two essays on Acts by Martin-Asensio (on the Stephen narrative) and Todd Klutz (on the Sons of Sceva) to be the most illuminating of the set.

Of the 70 pages devoted to the Pauline corpus, only one essay tackles an undisputed Pauline (Erickson’s helpful contribution on the semantic structure of Romans 5:12–21). Louw gives a very brief discourse reading of Ephesians 1:3–14 (which unfortunately fails to react with other notable attempts at the text-linguistics and semantic structure of the passage: Schnackenburg, Caragounis, etc.). The remaining essays are on the Pastorals, examining the development of ‘information/ topic flow’, and how this is marked by use of particles (Levinsohn), and Titus 2:15 as keystone in the discourse structure of the letter (Wendland). Finally, the three essays of Part IV (50 pages) address Hebrews 6:4–6 (Snyman); the discourse structure of 1 John (Olsson), and the question of how to decide where 1 John 1 ends (J. Callow).

It is difficult to review such a disparate set of essays. Most have a careful eye to methodological issues, and well illustrate the approaches adopted. So this will be a useful collection for courses on Linguistics of Biblical Texts, and may help some doubting Thomases among NT scholars to appreciate the cash value of methods introduced. Here is another fine example of the diverse and creative energies of the NT department at Roehampton, and of those with whom they are in dialogue.