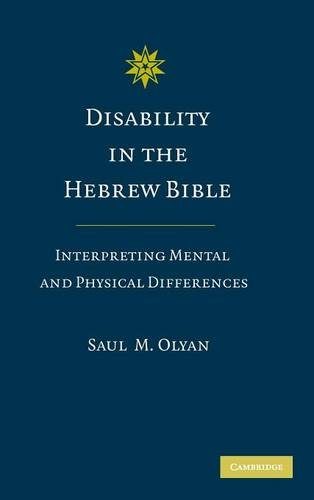 Disability in the Hebrew Bible: Interpreting Mental and Physical Differences

Saul Olyan works with an often neglected topic that to some readers of the Hebrew Bible might seem insignificant. The matter of mental and physical difference in the Hebrew Scriptures, though, has far reaching implications for contemporary conversation. Olyan deals with definitions and social constructs presented in the biblical text. While maintaining distance from current discussions of stigmatization and marginalization, this work speaks in a manner of relevance perhaps only surpassed by Amos Yong’s Theology of Down Syndrome. The seven essays clearly picture how the literary tradition of ancient Israel perceived disability.

In the introduction Olyan begins the necessary yet toilsome work of defining of terms. He settles on disability as “a physical or mental condition or state impacting negatively on affected categories of persons especially on account of the social meaning and significance attributed to the condition or state in the biblical context” (p. 3). The stigmatizing that occurs in the biblical text creates a representation of those with “defects” as disadvantaged in society and uses it as a rhetorical tool for negative comparisons. This cultural representation extends beyond ancient Israel to other cultures of the Ancient Near East. Olyan shows the complexity of the Hebrew Bible’s presentation as there are comparisons of idols to the disabled yet rich details of Yahweh’s special care with demonstrated power towards the disabled.

The first essay deals with constructs of beauty and ugliness in the Hebrew Scriptures. In examining vocabulary closely, he argues a close association between the common terms good and bad with beauty and ugliness. He illustrates that even the Scriptures have a social perspective with many elements of continuity with the current Western culture’s concept of beauty. There is discontinuity in several elements, and the Hebrew Scriptures do show beauty as ability beyond physical attributes. It also shows that lacking defects does not automatically make one beautiful.

In the second essay, Olyan draws from a passing point he makes in the previous essay that conditions considered defects in contemporary Western culture are not always biblical “defects.” The presence of defects conveys biblical ugliness; however, elements such as deafness and muteness are not technically biblical defects. Conditions such as blindness and lameness are treated as “defects” in the Hebrew Scriptures with corresponding stigma and marginalization. Mental illness and deafness are noticeably absent as biblical defects. This leads some to conclude that defects are always visible. Following Milgrom, Olyan convincingly argues that genital defects (Lev 24) are not normally visible to others, yet the stigma persists for these conditions. While marginalizing tended to occur in the context of worship, circumcision was a socially acceptable exception. Olyan provides an intriguing context of circumcision versus mutilation in the Ancient Near East.

The third essay deals with conditions the Western reader would associate with “defects” yet which are not specified as such in the Scriptures. The non-defective states can still be marginalized in varying degrees and manners. The variety can be seen as the blind, lame, and deaf are unrestricted in worship matters according to the text. Lasting social restrictions are placed on those with skin diseases, yet those with genital flow are restricted from social and cultic interaction only for a specified duration.

The fourth essay tackles the difficult condition of mental illness, which is almost as equally perplexing for contemporary consensus as ancient. The Hebrew terms translated as “foolishness” and “madness” sound like contemporary mental illness. Foolishness may include some retardation, but also a lack of general intellectual acumen. Madness more often refers to an individual with mental disease. Olyan provides two classic cases to consider: David’s feigned madness in 1 Sam 21 and Saul’s evil spirit of 1 Sam 16. In these texts mental illness is depicted as a covenantal curse and a sign of divine rejection. Olyan considers several Semitic cognates along with these texts to characterize mental illness.

The fifth essay targets the biblical future of disability by turning to the prophets. The overwhelming message of the prophets is that the future will be without disability. Yahweh intervenes to transform all disability. This would be a unified presentation with the notable exception of Isa 56:3–7 in which eunuchs are granted access to the temple rites in the future. This would reverse the priestly regulation of Deut 23:2 (ET 23:1) transforming the regulation rather than the disabled person.

The final two essays address connections of wholeness to nonsomatic objects such as stones and extend the investigation to the Dead Sea Scrolls. In conclusion, Olyan draws out the keen interest Yahweh shows toward the disabled despite often being cited as the agent of disability.

Olyan tastefully balances the stigma with the sensitivity of modern readers. His careful reading of texts for stigma, evident in both prose and metaphor, is helpful. The citation of iconographic elements and archaeological evidence provide full-orbed arguments. The slippery process of defining disability is benefited by the cognate work. This was most evidenced in his essay regarding mental illness. The inclusion of Egyptian material to the discussions would be helpful for perspective. The mutilation of iconography (following the Amarna period) and interesting literary parallels such as the Instructions of Amenemope (a warning against derision of the disabled, since god is his maker) are two ready examples. This careful work by Olyan heightens awareness to this important topic of the Hebrew Bible—one with extreme relevance for the current day.