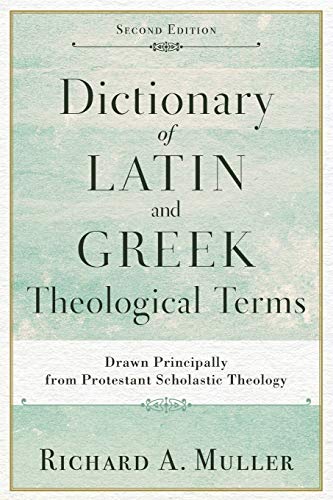 This re-launch of a decade-old book comes at a time when, although our Protestant forebears are not positively fashionable there is at least a trend towards appreciating their skill. Where their theology seems complex it may often be due to their conviction that they had to give an answer to the intricacies of the non-Reformation positions, just as we might today, be encouraged by the sight of our theologians engaging with contemporary thought. Much of it is therefore the Protestant version of pre-Reformation scholasticism.

Just who were these people? A list of authors is given from whom the contents of the word-list have been drawn. There seems an unfortunate mixing-together of primary and secondary sources on pages 14–15, but those who are clearly the former include Johannes Altenstaig and his theological lexicon and ‘vocabulary’ (which, surely, must be 1617, not 1517), J. W. Baier, J. Gerhard A. Polanus, Turretin. H. Heppe’s Reformed Dogmatics, that compendium of so much Reformed writing of the early modern period, also appears to be a major source of supply for this ‘dictionary’.

The majority of entries in the alphabetical sequence are given one-line explanations, often just a translation of the Latin (far less Greek, understandably). There are times when this verges on the humorous. Do we really need the entry: peccata enormia: ‘unusually great sins’? Also, one wonders at the ‘usefulness of introducing entries such as Trinitas or homo- and homoio-ousios, given that these strictly belong to the Greek patristic era, and can be more usefully and accurately explored in their range of usage in the pages of Lampe’s Patristic Greek Lexicon. Furthermore, the entry on enhypostasis seems a bit misleading. At times the whole thing seems a bit slanted in favour of the Calvinists, such as the idea that the extra calvinisticum(that the Word remained in heaven in his fullness, even while he shared human existence and accommodated its limitations) can be traced back to the early church as the orthodox belief. Moreover, Lutherans and Arminians are not always clearly distinguished, but perhaps that is deliberate.

But these are minor quibbles. Particularly worthwhile entries are found on Christology (communicatio idiomatum, forma Dei/servi), soteriology (iustitia, mediator, meritum de congruo, decretum), and anthropology (Homo, imago dei, persons) which was a particularly clear and helpful account of the development from the Cappadocians through Boethius to Aquinas and on through the Reformers. In this connection, we should observe that it is not only Protestant scholasticism, but scholasticism as a whole to which we are introduced. Some entries are superb, notably that on praescientia, persona and voluntas. The wordbook method sometimes fails to work in that there are gaps through which knowledge slips, e.g. no telling statement of nominalism, despite its appearance in entries such as universalia, or a real treatment of voluntarism, despite entries on voluntas Dei Therefore a list of supplementary reading would have been valuable. Also, summaries of, say Scotus’s position on voluntas or Calvin on accomodatio, while admirable in their clarity, are perforce too brief.

It is unlikely that one would consult this as a reference book. Rather, its use may be in exposing one’s own ignorance as one flicks through it (ignorance, not just of the terminology, but also of the conceptuality) and thereby filling some holes of understanding. Some introduction like this is vital for getting acquainted with the roots of what has been hitherto the main bough of Protestantism, or even for reading Barth intelligently. But how many people today want to do either?