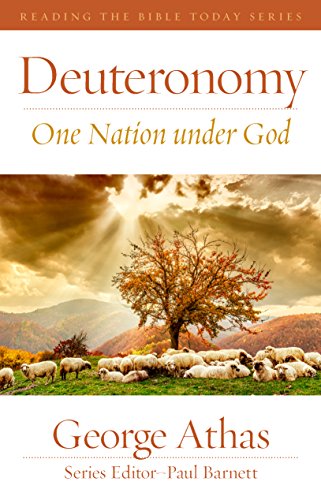 Deuteronomy: One Nation under God

George Athas is Director of Research and lecturer in Old Testament at Moore Theological College, an Anglican minister, and author of numerous books and articles. His commentary enables a first-time reader of Deuteronomy to understand and begin to apply this much-neglected portion of God’s word that he describes as the Old Testament’s “theological backbone” or “theology central” (p. ix).

Athas divides Deuteronomy into thirteen sections. In each section he begins his discussion with the structure and meaning of the text, before looking at how it was applied and interpreted throughout the rest of the Old Testament. He then looks into the way the New Testament treats each passage. The discussion questions that follow open up the contemporary context.

In the general field of Bible commentaries, Athas’s work is part of the beginning of a new sensitivity. Most Bible commentaries engage with other scholars, often dealing with fairly speculative agendas, or else with theological questions dating back to or beyond the Reformation. Athas notes that we are now speaking to a majority audience of people who are not even aware of those questions. He calls this “a post-Christendom era” (p. x).

The last decade in Western culture has seen a significant rise in hostility and mockery of the Christian faith, the Bible, and particularly the Old Testament. There is a widespread assumption that the books of the Old Testament, and Torah in particular, are not worth reading because they advocate a primitive and essentially immoral set of values. Athas wisely, and bravely, sets out to address this uninformed prejudice. It is our experience that this audience has proven to be open, interested, and very surprised by what the Bible has to say. Athas has produced a commentary that draws the interest and challenges the stereotypes of a biblically illiterate culture.

As an ancient text, Deuteronomy suffers from the tyranny of distance in time, geography and especially in culture. Athas’s solid scholarship proves its value as he informs the reader of the historical and cultural background to God’s instructions. This enables the reader to perceive the relevance of Deuteronomy for people today.

Athas is to be commended particularly for his willingness to engage explicitly with matters of sexuality. We speak to a generation that does not tolerate coy euphemisms when it comes to the painful and outrageous abuses of human sexuality. Such approaches resonate too closely with the attempts by notorious church leaders to cover up such crimes. Athas allows the text to speak to the present with its original explicit detail.

His discussion of passages dealing with virginity (pp. 261–64) clarify matters that many might prefer to avoid. Speaking to a multicultural community, this level of engagement is essential. His detailed exposition of laws pertaining to rape breaks down the cultural distance between the text and the present. Applying the case law of Deuteronomy, he acknowledges David’s sin with Bathsheba as rape (p. 96). He notes, “the law does not see rape as a subcategory of adultery. Rather, 22:26 equates rape with murder. This acknowledges the profound impact that rape has: it imposes a kind of living death on the victim” (pp. 266–67).

His discussions of adultery (pp. 88–90, 264, 278–80, 286), and ritual uncleanness (p. 271) cut through to the heart of the issues. By reading the text within its original context he persuasively demonstrates how Yahweh instructed his people to protect the vulnerable, particularly women and children, bringing justice to bear wherever abuse occurred (see also pp. 240–43).

Athas also brings a particular precision and sensitivity to the discussion of images and the second commandment (pp. 64–68, 78). Speaking of the tabernacle, he explains, “At the heart of Israel’s worship was revelation, not idolatry” (p. 167). Similarly, with respect to the third commandment, he states that “Honouring God’s name is about knowing him … and about how Christians live, speak, think and pray – not about how to pronounce a particular label” (p. 81).

Athas spends considerable energy clarifying the differences between the Old and New Covenants and the place of Old Covenant law in that transition. He explains Deuteronomy as a law for the nation of Israel, enabling that nation to maintain its relationship with Yahweh and the Promised Land. Given that the New Covenant people of God are not constituted as a geo-political state, and that Jesus has fulfilled the law, he states bluntly, “For Christians, then, the law is no longer binding as law.” Rather, “it educates Christians on the kind of God they worship and the kinds of standards he has in mind for people” (p. 202).

In describing Old Covenant law as prophecy and wisdom (pp. 201–2) Athas begs a number of questions. He states that “The nature of this [Old Testament] revelation was law.… The proper response to it was loyalty, obedience and fear.… The nature of this [New Testament] revelation was grace and truth. The proper response is love, fellowship and joy” (p. 51). Given the strong emphasis on love for Yahweh, unity and generosity among the Old Covenant community, and the extensive celebrations of the festivals and songs in Deuteronomy alone, this dichotomy seems strained at best. It would have been helpful if Athas had more clearly explained how individual salvation (including justification by faith, the work of the Holy Spirit, and the role of personal faith) worked for people under the Old Covenant. One might conclude from Athas’s commentary that these things didn’t happen until after Jesus’s resurrection (especially pp. 249–51).

Athas is careful in his discussion of the contributions of the editor, as distinct from the actual words of Moses. Controversially, he allows that the final form of Deuteronomy may not have been completed until the time of Ezra in 458 BC (pp. 3–4). Of greater concern is his suggestion that 10:14–22 may be “an editorial statement,” or that “the editor has put the words onto the lips of Moses” (p. 151, n. 58; see also p. 46 on 4:38). He reads 32:15–27 as a reference back to the exile (p. 4), in spite of the text stating that “Moses spoke the words of this song in the hearing of all the assembly of Israel” (31:30). He sees in references to covenant curses a likely editorial reading back, rather than an authentic prophetic prediction (pp. 4, 317–18; see also p. 315).

Overall, Athas’s commentary has opened up this foundational text for a wide audience. He challenges the assumptions and stereotypes of contemporary culture, and calls on Christians to come to grips with God’s character and instructions for life. He has shown us that Deuteronomy speaks to the issues of our times, and explains how Christ’s finished work can and will transform our lives and lifestyles, and free us from the destructive power of sin even here and now.