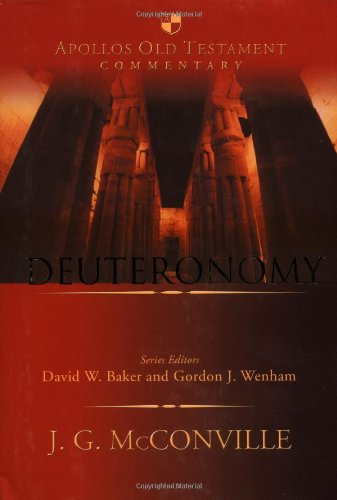 The editors (Baker and Wenham) of the new ambitious Apollos OT commentary series have found in McConville a well qualified commentator on Deuteronomy. He has published numerous works on various aspects of Deuteronomy. Although some of his main views, especially on the setting and ideology of the book (he rejects the ‘centralisation theory’) have been questioned (e.g. Lohfink, Braulik), McConville maintains his arguments that Deuteronomy, or at least a from of it, is a document that was fashioned as a radical political and spiritual constitution for Israel in the pre-monarchical period. Thereby he defends his understanding against a wide scholarly consensus that the composition of Deuteronomy is closely associated with the reform of the seventh century bc and the exile.

Although there is a clear overview of the ‘critical views,’ and a good deal of interaction with them, the real strength of the commentary (in my opinion) is found in the substantial reflections on the canonical dimensions of the book. This is done in a threefold way: i) Drawing on the insights of speech-act theory, Deuteronomy’s continuous capacity to address its ever new audience is explored; ii) The book’s theology is insightfully probed against categories of Torah, wisdom and prophecy; iii) Deuteronomy is related to a biblical theology, first to the priestly literature, ‘Zion’ theology, and finally to the NT.

In line with the series, the author provides his own translation with textual notes, followed by a section on Form and Structure. As alluded, the heart and main feature of this commentary which perhaps mark it out from others of its kind (e.g. NICOT and WBC), is the substantial exposition of the theological message within the framework of a biblical theology.

For example, in view of the often pejoratively used term ‘deuteronomic’, in the sense of legalistic cause and effect, McConville helpfully underlines the theme of undeserved grace that runs through Deuteronomy 7–8 and comes to a climax in Moses’ speech in chapters 9–10. In these chapters Moses says in effect that Israel will not inherit the Promised Land on account of their own righteousness, for they are a stiff-necked people (9:4–6). They are not elected because of their own merits, but only because of the grace and love of God. Following Braulik, McConville sees ‘gospel’ in Moses’ proclamation and argues that one comes close to a ‘Pauline doctrine of justification by faith, or righteousness that comes from faith’. Although McConville grasps some of the dynamics of this passage, it is a bit surprising that he does not sufficiently reckon the importance of Moses’ intercessory prayer in context (9–10) after all the narrative states several times that God was about to destroy Israel (9:8, 14, 19, 20). Only as a result of Moses’ loyal advocacy Israel is spared. In other words, this narrative suggests that divine grace needs to be first evoked in prayer. Related to that, the passage division is probably better placed in 10:22, not in 10:11, as McConville argues. The narrative consequently comes to a climax in Moses’ prophetic summons to fear YHWH and to keep the commandments. ‘Gospel’ yes, but it is intrinsically related to covenant mediation and obedience.

Notwithstanding these observations, on the whole McConville provides careful exegesis and helpful theological reflections. Given his focus on the theological message of the final form, the treatment of the text could have been enriched by engaging with some of the ‘pre-critical’ giants of interpretation, such as Rashi and Calvin. Moreover, a look at the authors’ index also reveals a striking lack of interaction with four important modern Deuteronomy commentators: Steuernagel, Rose, Tigay, and Miller. The latter is particularly regrettable, not only because Miller’s commentary shares a similar readership with that of McConville, but also because it is rich in theology.

Overall, the historical-critical reader might be provoked to disagree on various occasions with McConville’s handling of the diachronic dimension of the text. The intended readership, i.e. students and pastors of the evangelical tradition, however, will find a thorough commentary, rich in exegesis and theological reflections.