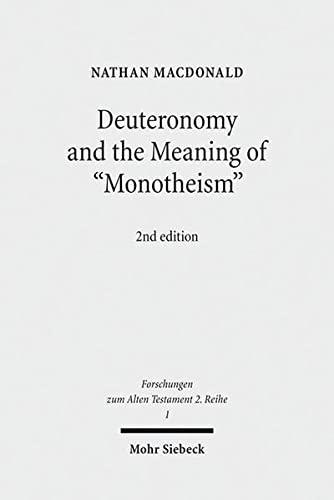 DEUTERONOMY AND THE MEANING OF ‘MONOTHEISM’

This is a revision of a University of Durham doctoral thesis supervised by Walter Moberly. The topic is an unusually important one, a central biblical teaching (the nature of God), refracted through one of the most significant passages (the shema) of one of the most theological books of the OT (Deuteronomy). To begin with, though, is a brief history of ‘monotheism’, and the chapter definitely confirms those scare quotes. The concept of monotheism is closely tied to the aftermath of the European enlightenment and first appeared in the writing of the Cambridge seventeenth century Platonist Henry More in the context of comparing different religions. It has retained abstract, intellectual overtones to the present day. When it is combined with the fiercely diachronic interests of historical criticism, it has led to scholars setting themselves the primary task of discovering how and when monotheism emerged from an earlier stage of religion in which the existence of other gods was acknowledged, even when insisting that Israel only worship one God.

MacDonald proposes that this is a misleading starting point for appreciating Deuteronomy. He makes his case through a detailed exposition of the shema (Deut. 6:4–9), which becomes a jumping off point for a rich and wide-ranging study of key themes and texts in Deuteronomy. After he has considered the alternatives he argues that the shema should be translated ‘Yahweh our God, Yahweh is one’, and that ‘one’ is an expression of devoted and extravagant love (compare the secular ‘you are the one’). No matter how many other gods might make claims on Israel, YHWH alone is to be ‘the one’ for Israel, as is also stated in a negative form in the first of the ten commandments.

This interpretation is strengthened by a more detailed exploration of the meaning of ‘love’, which both evokes and transcends its use in the spheres of marriage, sonship, politics, and the relationship between master and slave. The shema is a comprehensive call to love the Lord in every sphere of Israel’s individual and corporate life. Recognising this provides a valuable insight into the harsh measures of the ban, which MacDonald understands to have a primarily metaphorical significance, summing up all that threatens Israel’s love for the Lord.

The following chapters explore other implications of the shema. It requires Israel to remember YHWH actively, and again makes sense of the way that Deuteronomy has more to say about education that any other book in the Bible. Monotheism in Deuteronomy is not an obvious view of God once proposed, but is instead a precarious, threatened relationship, as Israel’s history amply proves. The corollary of monotheism is election, and Israel is called to be holy since it is the unique recipient both of the Lord’s blessing and his wrath. The fierce prohibition of idolatry also becomes clearer as Deuteronomy defines how the Lord chooses how to be present in Israel in a positive way. The conclusion emphasises how far we have come from the received meaning of monotheism.

This is one of the most significant and exciting, books of biblical theology I have read for some time, illustrating how the Bible can come to life when critical attention is paid to the contemporary context of its interpretation. Although the author focuses on monotheism, I suspect that his insights would be confirmed by a study of the modern idea of ‘one’, which often reflects a monochrome, impersonal unity reflecting popular mathematics and science. I also consider that this study has significant implications for a church with little awareness of our culture’s antipathy to the exclusive demands that Deuteronomy sets out so passionately. My main regret is that the untransliterated Hebrew and detailed argument will inhibit a wider readership. I wholeheartedly commend this book, and I hope that in due course the author will be able to present his insights in a more popular form.