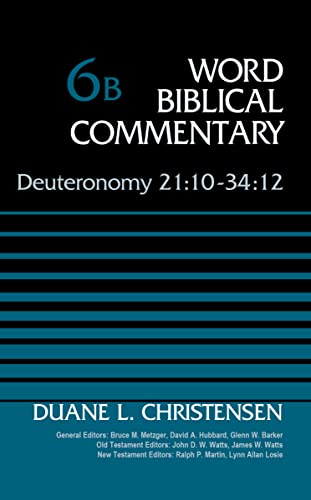 Although there is no shortage of Deuteronomy commentaries at present, Christensen’s massive two volumes (915 pp.) stand out as being different from the mainstream commentaries. His unusual approach to Deuteronomy is outlined in seven excursuses in the first volume. Unlike the traditional understanding of Deuteronomy, modelled on the tripartite structure of ANE treaties (introduction; covenant stipulations; blessing and curse), Christensen proposes that ‘Deuteronomy is best explained as a didactic poem, composed to be recited publicly to music in ancient Israel within a liturgical setting’. He suggests that the Song of Moses (ch. 32) is the most archaic core of Moses’ ‘greater song’ (i.e. the entire book of Deuteronomy, p. lxxxi).

The commentary follows the layout given by the well-proven Word Biblical series (translation, textual notes, form/structure/setting, comment, emplanation). Although the volume contains a great amount of information in all sections, the reader will soon discover that its heart is the author’s painstaking attention to the complex artistic literary structures of the book. Christensen argues that ‘concentric structural patterns are found virtually at all levels of the text (p. lxxxiii)’. Moreover, he invests considerable effort and space in arguing that carefully constructed numerical codes underlie the Hebrew text units. Given this emphasis on numerical and structural analysis, the commentary is less suitable for pastors and non-specialists and, and one may add that not all scholars and OT students will be equally convinced of the validity of this approach to commentary writing.

Having said that, one of the strength of Christensen’s commentary is his concern to show how the varied Deuteronomic legal material relates to biblical narratives. He argues that the Deuteronomic laws found in chapters 12–25 are ‘midrashic’ expansions of the Ten Commandments. ‘These laws in turn are expanded in a similar manner in narrative form’ from Genesis to 2 Kings.

Ending on a more general note: Both volumes contain massive up-to-date bibliographies which are of great value to anybody interested in the fifth book of Moses. From a manufacturing point of view, it is greatly welcomed that the renowned Word series receives now under Nelson Publishers the quality binding it deserves (the binding under Word Books, I am afraid to say, was simply disgracefully poor-quality).