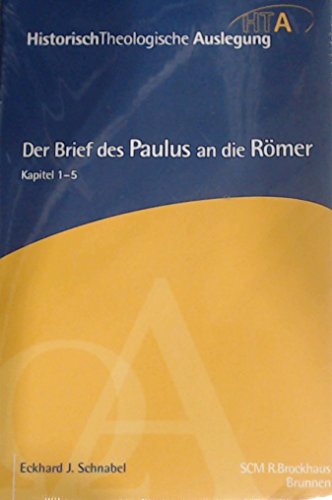 The HTA commentary series aims to probe the texts literarily and within their ancient contexts without neglecting the texts’ theological significance for today. The authors engage Scripture with critical minds and with a disposition of trust toward the text and its divine inspiration, attending to meaty exegesis while keeping in view the history and relevance of the theological conversation. Few books have been subject to as much debate as Paul’s epistle to the Romans, whose every chapter has given way to mountains of secondary literature and theological controversy. Eckhard J. Schnabel’s two-volume contribution on Romans offers almost 1,500 pages of commentary (not including indices or bibliographies) on Paul’s letter. This review will briefly sketch his approach to the letter’s background and theology.

Volume 1 opens with an introduction to Paul’s life and mission (based on Acts and the letters) and the background of this epistle. Schnabel locates Paul’s writing in Corinth during the winter of AD 56/57, viewing it as Paul’s direct dictation to Tertius. He views the congregations addressed in the letter as having grown up especially out of the synagogues and consisting, by Paul’s time, of about five house-churches. Roman Christianity was likely primarily Gentile, probably mostly God-fearers who already worshiped Abraham’s God but were uncircumcised before believing the gospel, but also including Jewish believers. Paul wrote only two years or so after Jews returned to Rome after Claudius’s expulsion, which affects the letter’s background (Schnabel surmises that this affected the availability of kosher butchering, which caused the apparent asceticism addressed in Romans 14). Planning a trip to Spain by way of Rome, Paul lays out and defends his gospel, often against a “typical Jew” (vol. 1, p. 39) addressed singularly as “you.” This makes the main body of the gospel proclamation (1:16–11:36) appear somewhat “independent” (vol. 1, p. 38) from the situation of Paul’s mostly-Gentile addressees. Schnabel overviews possibilities but does not pronounce definitively on Paul’s purpose in writing Romans, noting that Paul does not explicitly name what he hopes to achieve or to get from his audience (cf. Rom 15:24).

The main body of the commentary is formatted thus: each section begins with a fresh translation of a passage, followed by an overview of the passage’s place in the book and text-critical issues; next comes a verse by verse explanation. Finally, the commentator reflects on historical or contemporary-theological issues addressed by the passage (e.g., sexual ethics after Rom 1:18–32, a discussion of whether there is any ecological/environmental significance in Rom 8:19–22). Summaries of differing views or academic debates are usually kept to small-print excursuses. This format makes the volume easily referenced for teachers and preachers, as theological exposition takes the lion’s share of the page. Likewise, Schnabel’s German is eminently readable, and his translation is both clear and accurate (translating Χριστός consistently as Messias [“Messiah”]).

Romans is held dear by most Christian communions for the theology it expresses, even as each disagrees over central topics in the letter. Schnabel’s commentary does not treat every differing theological position, but dialogues with many and brings nuance and insight to many debates in which his exposition must participate. He emphasizes that justification—a main theological topic—is God’s righteousness communicated to humans as a gift, and yet is a saving power that grips and justifies believing sinners to free them from sin and draw them into real ethical life in Christ (see the excursuses on the righteousness of God [1:174–80] and the New Perspective [1:65–69]). Schnabel’s treatment of Paul’s soteriology in many commentary passages combines an unrelenting emphasis on the free forgiveness of sins in Christ with an understanding of real transformation as believers are transferred from the reign of sin to become God’s servants. This corresponds to his views on the (debated) passages about the final judgment and keeping the law in Romans 2:7, 10, 13–14 and elsewhere, which he argues are not hypothetical, but pertain to Christians who keep the law according to the new covenant, the law written on the heart (cf. Jer 31:33; see for example 1:299–300). Similarly, he argues that the depiction of the reign of sin in Romans 7:7–25 is about “the past,” a characterization of the pre-conversion human condition, whereas Romans 8:1 begins talk about the believer’s “present,” in which believers are forgiven in Christ and live anew by the Spirit. His discussion of Romans 11 emphasizes the priority and efficacy of grace, while maintaining that human faith empowered by grace is a requisite for which humans will be held accountable. He explains Paul’s hope for Israel according to the flesh with an emphasis on faith in Christ rather than outlining a separate dispensation, and takes “all Israel” in Romans 11:26 to refer to all believers in Christ.

Schnabel is good in the introduction and throughout at noting the way Paul’s diatribe drives his proclamation toward the edge of a logical cliff and then pulls back to counter false conclusions some might draw (e.g., a non-priority to Israel in 3:1–4, cheap grace in 6:1–2). He is attentive to rhetorical devices in the letter. The word studies provided in excursuses are likewise well done and quite helpful, attending to Jewish and Greco-Roman backgrounds for Paul’s terms and their significance.

No commentary can say everything, of course, and good ones have their weaknesses. One was surprised to see a considerably long discussion insisting that baptism in Romans 6:1–4 is metaphorical and may only secondarily relate to “water baptism” (2:23–36)—much of which struck one as historically and linguistically unconvincing—with theological reflections following. On the other hand, Paul’s comment about marriage in Romans 7:2 is not compared with similar statements in Paul or the Gospels for its modern relevance in the church. The commentary’s greatest lack, in my view, correlates with its introduction. Schnabel’s view that much of the letter’s argument is somewhat independent of his addressees’ situation is not only debatable, it also affects much of the commentary at the level of theological exposition. Schnabel highlights and expounds Paul’s gospel in Romans very well, and readers who disagree will still benefit from consulting him. But the commentary is often lighter than one might hope regarding potential social situations or effects at which Paul’s arguments might be driving.

This being said, Schnabel has offered very helpful commentary on Paul’s most debated letter. I certainly will be consulting it. It is theologically insightful and clear, and attends well to Paul’s terms and logic. It will repay scholars as well as German-reading pastors and teachers.