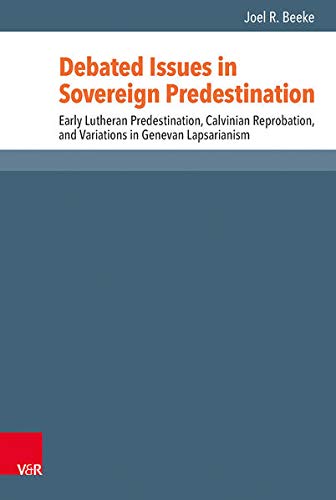 Joel Beeke’s Debated Issues in Sovereign Predestination may have an intimidating subtitle (“Calvinian Reprobation, and Variations in Genevan Lapsarianism”) but this ought not dissuade prospective readers. This book offers a clear, judicious exploration of aspects of predestination that many modern readers are prone to ignore or dismiss as unimportant. In fact, as Beeke ably demonstrates, “lapsarian” issues have unexpected theological and pastoral significance.

The book focuses on three theological questions. First, does God’s act of predestination only refer to his positive, saving act wherein he chose individuals for salvation prior to creation (election), or does it also include an active predestining of the non-elect to damnation (reprobation)? This is the difference between single and double predestination. In single-predestination God passively passes by those not elected to salvation, whereas in double-predestination he actively reprobates them. Second, Did God regard the objects of his predestining act as sinners in his sight (infralapsarianism) or as uncreated, non-sinners (supralapsarianism)? Stated differently, did God predestine the elect out of a fallen humanity, or did he set out to create two groups of people, those saved and those condemned, without sin yet being in view? Finally, what are the theological and pastoral consequences of one’s answers to these questions?

The book consists of three parts. First, Beeke traces the themes of predestination and reprobation in Lutheranism from Luther to the Formula of Concord (1577), before offering historical and theological comparison and evaluation. Second, he expounds Calvin’s doctrine of reprobation and follows it through Calvin’s theological development. The final section highlights “lapsarian variations” among subsequent Genevan theologians up to the eighteenth century. Each section deals with a disputed historical and theological issue: the nature of early Lutheran views on predestination; the character of Calvin’s views on reprobation; and the relative prevalence of infralapsarian and supralapsarian options among Genevan theologians from Beza to Tronchin.

Part one offers a fascinating narrative of the development of early Lutheran attitudes to predestination. Martin Luther (1483–1546) could assert reprobation very strongly, but he often tempered it through appeal to his distinction between the “hidden” and “revealed” God. This allowed him to avoid difficult lapsarian questions by locating them in the mystery of God’s undisclosed will. Luther was concerned with the pastoral value of predestination as a source of comfort and assurance. Undergirding the tensions in Lutheran thought on predestination from the start is a Law-Gospel distinction that will only allow doctrines of the gospel to have positive pastoral application. Whilst Luther could use reprobation to a positive pastoral end (e.g. to promote humility and gratitude), later Lutherans would struggle to find any positive use of reprobation and would jettison the concept.

In part two, Beeke engages historical and theological scholarship on the place of reprobation in Calvin’s thought. Beeke demonstrates that Calvin taught active reprobation (double-predestination), and that this was at least implicitly present in his earliest work. This section traces the development of Calvin’s views on reprobation and offers a valuable explanation of Calvin’s distinction between two causes of reprobation: God is the remote cause of reprobation, whilst man’s sin is the proximate cause. This distinction is worthy of careful reflection. It simultaneously demonstrates that God’s reprobating act is just (sinners deserve condemnation), and yet that human actions in no way cause or influence God’s acts, even in the case of reprobation. These are subtle matters and Beeke explains them well.

Beza has often been mischaracterised in the “Calvin versus the Calvinists” debate as the decisive scholastic distorter of Calvin’s theology. Beeke takes two chapters to demonstrate Beza’s essential continuity with Calvin and his pastoral sensitivity, which flies in the face of many notions of what “scholastic” theologians were like. Although Beza was supralapsarian, Genevan theology after him was dominated by infralapsarians. Francis Turretin, for example, rejected supralapsarianism largely due what he perceived to be its theological and pastoral implications. Beeke’s study repeatedly highlights how these sophisticated Reformed theologians were also profoundly pastorally oriented and possessed a deep concern for the edification the church.

This final section of the book also tells a story of theological decline. Both the older Tronchin and the older two Turretins (Benedict and Francis) were orthodox Reformed theologians. However, the next generations (Louis Tronchin and Jean-Alphonse Turretin) adopted various modernist and rationalist ideas which severely compromised their theology.

Beeke’s study concludes with ten theological implications. Alongside accurately presenting the views of the theologians he covers, Beeke uses his study to argue for what he views as properly Reformed views of predestination. He presents both infralapsarian and supralapsarian positions as legitimately belonging to the Reformed camp. However, he strongly advocates for double-predestination and uses his historical survey to argue that single predestination has unintended negative consequences. “Lutheran history confirms that a monergistic, single predestination is neither a biblical nor rational solution; repressed reprobation must end in repressed election.” (p. 74)

This is a bold claim, extending beyond history into biblical exegesis, and theological and pastoral consequences. Readers will need to make up their own mind whether they find Beeke’s theological critique convincing, but his study puts the reader in a good position to do just that.

This book invites further study in several directions. How did other early Reformed theologians treat these themes? Did the unintended theological consequences that Beeke observes playing out in Lutheranism and in Geneva develop similarly elsewhere? The theological argument of the book would be significantly bolstered if similar patterns could be observed in other Reformed centers and networks, and in later eras.

In sum this is a very useful book, not only to theologians, but also to pastors. It is essential reading for anyone interested in early modern Reformed thought.