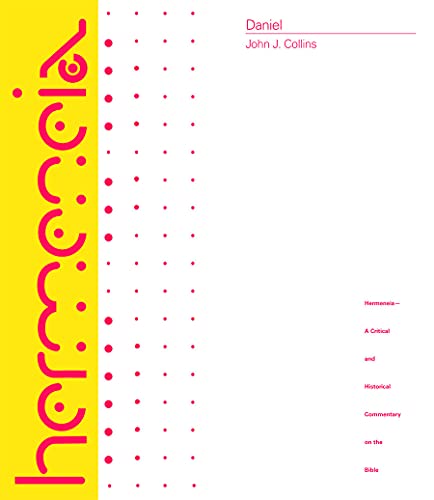 These two commentaries could hardly differ more from each other. It is startling to see how the reading of the same biblical book—and what a book!—can lead to such different viewpoints, a classic example of how one’s method determines the outcome. Collins, now of the University of Chicago, advocates the standard critical position, whereas Miller, of Mid-America Baptist Seminary in Memphis, TN, writes in a series ‘unapologetically confessional’ and ‘committed to the inerrancy of Scripture’ (general editor’s preface). We shall start with the latter.

Miller’s commentary represents the standard conservative kind, taking a moderately dispensational stand. Miller has read widely and wrestles with questions that interest literalists (e.g. over 20 pages on 9:24–27, the ‘seventy sevens’, in contrast to just two pages on the question of genre). He interacts a lot with other conservatives, including amillennialists such as E.J. Young, and quite a bit with non-conservatives, but only in connection with a text where the two viewpoints do not differ as much. Major critical viewpoints, however, are dismissed in the introduction. Interestingly enough—and unlike Walvoord or Baldwin—he follows the standard critical interpretation of chapters 10–11 in terms of their exact correspondence with known history from the death of Alexander the Great on. But he specifies: ‘Emphasis is being put on two individuals, Antiochus IV Epiphanes and Antichrist’ (p. 290). And all of it is prediction of a real Daniel in the 6th century bc.

As to the so-called apocalyptic (see below) parts in Daniel, Miller breaks little new ground. For instance, he takes the ‘seventy sevens’ literally, being amazed at the exact fulfilment of the prophecy as far as the first 62 ‘sevens’ are concerned, viz. at Christ’s baptism, provided one takes 458 bc as terminus a quo (p. 266). The 70th ‘seven’, then, is all vintage dispensationalism, complete with the ‘gap’ (separating it from the 69 preceding ‘sevens’), Christ, Antichrist and the Tribulation, but with no re-instituted sacrificial systems nor rapture in the middle of it.

There is no separate bibliography, but the selected subject and especially the author index leads one to all pertinent sources for the serious study of Daniel. There is little doubt that this well-produced commentary will serve as a standard text for years to come for conservatives, truly a worthy update to Walvoord’s or Wood’s.

Now as to the other side of the great divide, anybody familiar with the scholarship about this admittedly strangest of all prophetic books in the Hebrew Bible associates it with John J. Collins. He has established himself in the critical scholarly world as an expert on practically any matter pertaining to the book of Daniel. Whether one agrees with him or not, one had better read what he has to say on a given datum in Daniel or else one may miss out on something substantial.

Announced as the most comprehensive English commentary on Daniel in 65 years (probably with reference to J.A. Montgomery’s commentary of 1927 in the ICC series), Collins’s work distinguishes itself primarily by numerous quotations from up-to-date pseudepigraphical and Dead Sea Scrolls literature, especially as they pertain to apocalyptic. Whether one agrees with their pertinence to a given text in Daniel or not, it is good to be made aware of them and to be able to compare them to texts in Daniel. The Greek additions, along with a commentary on them, as well as the Old Greek for chapters 4–6, are also handily given together with the MT, fully translated and with textual notes.

Collins’s introduction already represents a gold-mine of information, especially when it comes to the history of interpretation. It is hard to find a better synthesis showing both how (in his view) this prophetic message developed and how it was interpreted throughout the ages. Nothing seems to be left out.

In terms of introductory matters, pride of place (as far as space is concerned) goes to the question of genre and setting (pp. 38–71). Thus, chapters 1–6 are rather stereotyped ‘court tales’, pre-Maccabean in time and older than chapters 7–12. The marshalling of resources of ANE studies in support of conservative views notwithstanding (cf. Wiseman, Kitchen, Baldwin, Shea), for Collins the Babylonian setting of Daniel 1–6 remains fictional and is best explained by an eastern diaspora origin at the time of Deutero-Isaiah, since, at that time, the legitimacy of Gentile rule was not in doubt. Two of the major characteristics of the tales, viz. the superior wisdom of the Jews through the power of God and their rivalry with the Chaldeans, are best understood in such a setting. Finally, the purpose of the tales is to teach in story-form what Jeremiah 29:7 says more apodictically: ‘Seek the welfare of the city where I have sent you into exile … for in its welfare you will find your welfare’.

But chapters 1–6 serve also as an introduction for the revelations in chapters 7–12. Though admitting that scholars have often been guilty of randomness in dubbing a work ‘apocalyptic’, Collins sides with those who take chapters 7–12 as a ‘historical apocalypse’ with, as its distinguishing feature, ex eventu (i.e. ‘after the event’) prophecy. It is these chapters, then, which he reads alongside the pseudepigraphical writings, viz. the Book of Enoch, 4 Ezra, 2 Apocalypse of Baruch, to point out their similarities with Daniel. In all of them, he says, prophetic visions are transformed into symbolic visions, interpreted allegorically, Daniel’s symbolism, however, being ‘considerably more baroque’ (p. 55). As to the content of chapters 7–12, typical for them are such things as the periodization of history (e.g. four kingdoms, 70 weeks) and determinism (i.e.history as measured out and under control).

Though Collins hails the triumph of the critical position, now ‘accepted without question, even in the avowedly evangelical Word Biblical Commentary by John Goldingay’ (p. 122), it is, in the eyes of this reviewer at least, not yet a given that ‘the great achievement of two centuries of historical criticism of the Book of Daniel has been to clarify the genre of the book’ (p. 123), viz. apocalyptic. Collins’s triumphalism is premature, because it remains yet to be proven that Daniel is part and parcel of apocalyptic and not just the ‘connecting hinge’ (Montgomery) between the canonical writings and apocalyptic as he defines it. Collins defines it thus: ‘An apocalypse is a genre of revelatory literature with a narrative framework, in which a revelation is mediated by an overworldly being to a human recipient, disclosing a transcendent reality which is both temporal, insofar as it envisages eschatological salvation, and spatial insofar as it involves another, supernatural world’ (p. 54). Now as any careful reader recognizes, much in Daniel is not apocalyptic, but parts in it must have given rise to the development of apocalyptic until it became the literary genre as defined by Collins.

It is Collins’s dominance of the discussion of apocalyptic that leads him unfortunately to sweeping statements such as: ‘All the Jewish apocalypses are pseudonymous’ (p. 56). Are they really? How come, then, Daniel is the only one whose name is not borrowed from some previously known OT saint such as Enoch, Moses, or Ezra? Though such names obviously lend authority to writings bearing them, in case they turn out to be pseudonymous, they still amount to make-beliefs at best and to frauds at worst, be that with the best of intentions (cf. Goldingay, Daniel WBC, p. 321f., or in Themelios 2:2 (1977), 49). Whoever we may say Daniel was, traditionally speaking, he definitely is not as illustrious a person as the others are. So the ultimate question is: on whom lies the burden of proof? On him who affirms or on him who denies pseudonymity? We keep thinking it is on the former, and Collins has not won his case yet. Interestingly enough, the pseudonymity issue, ably discussed by Joyce Baldwin (Themelios 4:1 (1978), 6–12, and Tyndale Bulletin 30 (1979), 92–99), is conspicuously absent from Collins’s discussion and not even indicated in his huge bibliography.

Thus, only when there is full agreement on what an apocalypse is actually made up of and not just ‘on a core corpus of apocalypses, which are bound together by certain traits that distinguish them from other forms of ancient literature’ (p. 53), can one also speak of pseudonymity and its alleged corollary, ex eventuprophecy. But as long as the constituent parts of ‘historical apocalypses’ are not more clearly delineated (cf.pp. 54f.), their being pseudonymous and containing ex eventu prophecy remain foregone conclusions. Now these affinities are evident in 1 Enoch, 4 Ezra and 2 Apocalypse of Baruch, but are they as evident in Daniel? Let the reader judge; and thanks to Collins’s commentary, he can now do that much better.

Can this commentary be recommended? Yes and no! Yes, to the research student having to wrestle with the critical questions, but no to the student preparing for ministry in the church. While it is without peer, perhaps with regard to details (e.g. on eunuchs in 1:3 (p. 134), or on being burnt as a punishment in 3:6 (p. 184)), it is theologically so dry as to lead one to not even consider ever preaching on Daniel! Though not much less critical, Goldingay’s commentary is a gold-mine in comparison and much to be preferred for a church context.