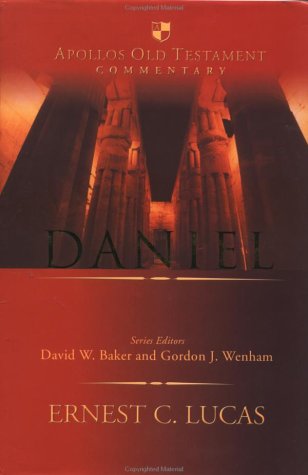 This volume is another in the Apollos Old Testament Commentary series. After a brief introduction the bulk of the commentary is spent on the text itself. Each chapter treats the material from different angles. First comes Lucas’s own translation followed by detailed actual comment. Relevant literary questions are then treated under ‘Form and Structure’ before a detailed ‘Comment’ on the text. Finally an ‘Explanation’ considers the theological significance of the biblical material and its contemporary relevance.

In an innovative move, the final chapter is an Epilogue, in which Lucas draws together the threads of a number of critical issues in the light of his preceding textual commentary. An Appendix provides a translation of the Greek additions to Daniel, itself a useful contribution to the study of Daniel.

Anybody who has read the contributions of Lucas to the field of Daniel studies would expect this to be a good commentary, and it is. It is readable; there is an impressive marshalling of both Ancient Near Eastern and biblical background material; the important Greek tradition of Daniel is treated judiciously; an appreciation of genre and literary structure adds significant insights for the reader; and this is all done with an eye on the theological and contemporary significance of the text. In doing his work, Lucas also keeps the methodological issues close to the surface.

The author is careful not to force critical conclusions on matters that remain inscrutable. He treats the stories of Daniel as literature that lies ‘somewhere on the continuum that runs from imaginative writing to historical reporting’ (27). As to the vexed questions of dating and authorship, while recognising the probable Persian provenance of the court tales, he cautiously sets the final form of Daniel in the mid-second century BCE. That is an unexceptional conclusion. His additional proposal that the vision material arose as a response to the Antiochene crisis in Palestine on the part of a group of ‘upper-class, well-educated Jews’ (314) in the Diaspora is more provocative. Lucas’s reasoning on this point seems unduly speculative.

As is the nature of the case with any commentary writing, there are some tensions around the question of audience. The epilogue is largely a successful device, and reflects a laudable desire to draw critical conclusions in the light of the text. This however, does mean that the user is compelled to read the commentary, uncertain of the critical assumptions that lie behind some of the material.

A second tension around the question of audience relates to the depth in which Lucas considers the possible background to texts. This reflects his own special competencies, but not all readers will find the level of detail helpful. Similarly, the separation of explanation from exegetical comment and discussion of form and does run the danger of losing a sense of the commentary as narrative.

Notwithstanding these hesitators, I believe that this work should join those by John Collins and John Goldingay as one of the most significant recent commentaries on the book of Daniel. The scholarship is first class, the conclusions are judicious, and the voice of God is heard. It has succeeded in meeting the aim of the series ‘to provide not only tools of excellence for the academy, but also tools of function for the pulpit’ (7). It has a useful place on the pastor’s desk, and will be an important resource for the teacher and student of the book of Daniel.