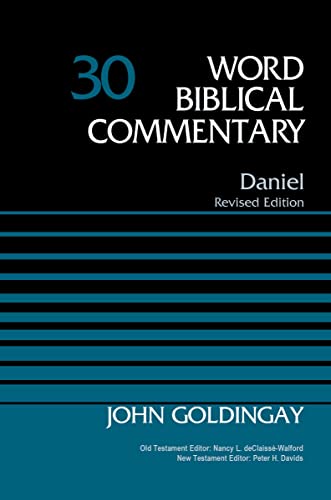 When I began research in the book of Daniel as a newly minted graduate student in 1990, John Goldingay’s Word Biblical Commentary (WBC) volume on Daniel had just come out the year before. In the days before easily accessed electronic bibliographic databases, it proved to be a gold mine of up-to-the-minute research, and I came to appreciate Goldingay’s commentary on Daniel as one amongst several of the very best commentaries on that book. At the same time, within the well-performing WBC series, the commentary on Daniel is one of the best. The commentary has worn very well over its thirty-something years of life, anticipating as it did several strands of research that have continued to feature in Danielic studies. And now Goldingay has improved it even further with this revised edition. In the author’s own words, the revision “didn’t make me change my mind about big things, but it gave me new things to say” (p. 9). In a range of subtle ways, his earlier work is enhanced in this edition.

The basic generic concepts of the WBC series remain in place. The commentary is still characterized by a desire to hold together the best of critical and technical biblical scholarship with a conviction that the Bible contains the living word of God for contemporary readers. To that end, each major section opens with a comprehensive targeted bibliography, and then five parallel treatments of the passage. The first is a translation, followed by detailed technical notes on the translation and text-critical issues arising therefrom. Then comes a section on form/structure/setting, in which an overview of the basic structure and thrust of the passage is laid out. This includes details of the literary setting, which inevitably entails also reference to the historical and social context of the biblical text. The commentary then turns to comment, which entails much of the material traditionally associated with the commentary genre. This is where details relating to cultural background and other particularities are spelled out. The final treatment in each major section of text is labeled explanation. It is in this section that the distinctives of the WBC approach are most evident. Therein the commentator has the opportunity to highlight threads of narrative, and comment in more detail on literary and theological moves that the writer of the text might be making. In the process, the relevance of the text to contemporary life and societies is also drawn out. All of this is preceded by a comprehensive bibliography and an introduction that outlines key critical issues in the study of the book and the commentator’s position where these issues are particularly contested.

In the introduction to the commentary, Goldingay goes into helpful detail on the Jewish and Christian reception of the book of Daniel. He also sets the book of Daniel into the context of the broader corpus of Daniel-related texts, such as the Qumran material and the early Greek translations. In the process, he does not focus explicitly on issues such as date and authorship, being content to let his position emerge in the context of broader considerations. The result is a nuanced approach to both issues that leave space for readers from a range of theological perspectives to find their place within the commentary.

Goldingay is similarly careful and constructive on the fraught matter of eschatological interpretation of the book of Daniel. He wants to read the visionary material primarily against the backdrop of the Antiochene crisis of the 160s BCE and is careful not to over-read a literal interpretation into the present day. He also challenges those whose reading is dominated by academic concerns not to lose sight of the fact that the book of Daniel should not be captured by a primarily historical approach; it transcends that into our own day, and readers need to be prepared to be surprised by what it might say (pp. 133–34). Humility is called for in the face of the temptation to exclude readings with which we disagree or which display a degree of naivete. God may be speaking therein also. This becomes clear not so much in the introductory material as in Goldingay’s treatments of the various visions.

Unlike some revisions of earlier published material, this one from Goldingay demonstrates a detailed acquaintance with scholarly work on Daniel that has emerged since his original edition. As he indicates in his preface, this new material does not cause any major shifts in his thinking on the book of Daniel, but brings some extra nuance in places. A particular achievement of this revision is the manner in which Goldingay draws the views of more recent authors into his discussion of the book of Daniel.

He has also continued to work on his translation, which has been refined here and there. In the process, Goldingay’s ability to surprise the reader with fresh perspectives remains very much in evidence. Whether or not the reader agrees with all his translation choices, the effect is always thought-provoking. See for example Goldingay’s rendering in poetic form of Daniel 12:2–3, the verses that I think of as the capstone to entire book:

Thus many of those who sleep
in a land of earth will wake up,
Some to lasting life,
others to utter shame, to lasting abhorrence.
The discerning will shine
like the moon in the sky.
Those who set the multitude right
will shine like the stars to all eternity. (p. 505)

Accordingly, there is the occasional amendment to the technical notes, although most of them remain intact from the earlier edition. This is also true of the form/structure/setting and comment sections of the commentary.

The most development between the original and the revised editions is found in the explanation section. These tend to be slightly longer than in the original edition and the added length may largely be attributed to Goldingay not so much shifting direction as extending out two trajectories that were in evidence in the original edition and have characterized much of his writing in other Old Testament sub-disciplines in the intervening years. First, he brings extra finesse to a literary appreciation of the stories and visions of Daniel. Second, there is expanded theological reflection on the contemporary significance of the book of Daniel, including on matters eschatological (on which see above).

It seems to me that the WBC format outlined above is intended to make the commentary accessible to a range of types of readers. There is plenty there for the technicians, for those who come to the commentary with questions of meaning, and for those who want to know how all of this might apply in our own day. This is a strength of the format, but it also has inherent weaknesses. The long, densely packed bibliographies can be off-putting. And the distinction between structure/form/setting, comment, and explanation is not always evident, especially that between comment and explanation. This results in a not entirely user-friendly experience for those who want to quarry the material (which is probably most users of commentaries). Sometimes the reader has to work quite hard to find the point she or he is looking for. Having said that, the layout and font in the revised edition are a vast improvement over the original, and also account for a considerably thicker commentary (624 pages versus 351 pages in the original edition).

Notwithstanding any weaknesses in format or layout, this commentary is a good one for preachers, students, and researchers as well as for critically aware laypeople. It is one of the best of its genre and one of the best on the book of Daniel from the pen of one of the leading scholars of our generation. If you are looking for one commentary devoted to the book of Daniel for your bookshelf, this one is quite possibly it.