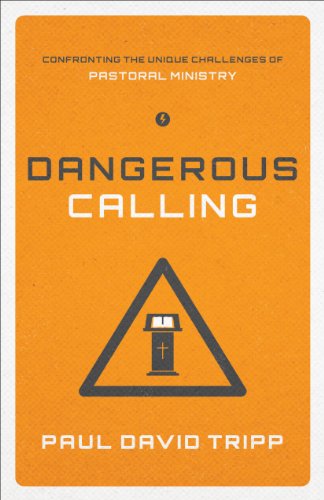 Paul Tripp, a former pastor and the president of Paul Tripp Ministries, carries with him “grief and concern about the state of pastoral culture in our generation” (p. 21). His book, Dangerous Calling: Confronting the Unique Challenges of Pastoral Ministry, does exactly as the subtitle indicates: it confronts. As Tripp notes from the outset, the primary goal of this book is not necessarily to instruct or encourage, but to diagnose a problem; a diagnosis that is intended “to make you uncomfortable” (pp. 11–12). This book grew out of Tripp’s own pastoral experience and interaction with hundreds of churches and was written because he “could not live with not writing it” (p. 12).

Part 1 diagnoses the problem with pastoral culture. The opening chapter is primarily autobiographical, recounting how Tripp’s early years as a pastor were marked by anger, pride, and a developing “disconnect between the public pastoral persona and the private man” (p. 21). Chapter 2 moves a step forward by noting how his experience is not unique. Many pastors are in significant spiritual trouble and are blind to it. Why is this? We might summarize Tripp’s answer with two unhealthy separations: the separation of the pastor’s head from his heart, and the separation of the pastor from community. Chapters 3 and 4 focus on the first of these, demonstrating the neglect of the heart in pastoral training and ministry. We have often “academized Christianity” and equated head-knowledge with spiritual maturity. Chapters 5 and 6 tackle the second separation, demonstrating that pastors have often neglected community, which is “the normal means of personal spiritual health and growth” for Christians (p. 87).

Parts 2 and 3 focus on two dangers every pastor continually faces, the danger of “losing your awe” in God, and the danger of cultivating a prideful sense of “arrival.” There is much overlap between the various chapters in these sections, and they pick up on themes already introduced in the first part. Rather than reviewing each chapter, we can get the sense by noting several themes: (1) seek horizontally from others what you already have vertically in Christ; (2) you can’t give to others what you don’t have yourself; (3) your ministry is always shaped by the condition of your heart; (4) there is a potential disparity between the pastor’s public persona and his private person; and (5) every pastor is in the middle of his sanctification. All these are problems that arise when pastors no longer preach to themselves the same gospel that they preach to others (p. 222).

Several strengths stand out in this excellent book. First, Tripp is successful in what he seeks to accomplish. His goal is to diagnose the problem with pastors and pastoral culture. There are many directions he could have taken, but he seems to have gotten to the heart of the matter, which is a matter of the heart. This book assumes that many pastors’ primary problem is not a lack of preaching skill, theological knowledge, or time management, but a failure to recognize and fight an “inner war” for the affections of our heart.

Second, Tripp wisely and thoroughly explores this central problem. This is a profound, perceptive, and insightful book. Like a good spiritual doctor, Tripp thoroughly explores potential problems in a pastor’s soul and asks heart-level, probing questions for personal reflection.

Third, given the nature of the problem he is addressing, the tone of the book is appropriately serious, even prophetic. Tripp is consistently earnest and often includes statements such as “this might make you mad” or “what I’m about to say will probably get me in trouble.” And yet such prophetic force is coupled with humble transparency. Many of his examples of sin were from his own life, and he acknowledges that he wrote much of the material with personal conviction and tears. In this way, he actually models the kind of openness and transparency that he’s after. The overall picture is not of Tripp pointing his finger at others, but pointing it at himself and inviting others to practice similar self-diagnosis.

Weaknesses of Dangerous Calling lie not in the substance of the material but in aspects of its presentation. It seemed repetitious in two ways. First, the central themes are very thoroughly and insightfully introduced, explained, and illustrated early in the book, but then repeatedly picked up for additional rounds of further explanation and illustration later on. This created the sense of circling around and around the same topics rather than a forward movement in the book. Second, while this book is well-written, some aspects of style could have been minimized. In particular, strings of sentences often begin with the same word or phrase. A string of 22 insightful rhetorical questions, for example, each began with “how many pastors” or “how many of us” (p. 126). Additionally, nearly every chapter has numerous rhetorical, heart-searching questions. These are excellent and important, but it becomes difficult to engage with a dozen of them strung together at so many places throughout the book. It seems counterintuitive, but as the amount of questions increase, their ability to engage the reader might decrease. Such repetition results in the sense that the clarity, thoughtfulness, and force of the book could be maintained in perhaps half the length. Such conciseness would also allow the book to be more accessible to the readership he intends to reach, which is much wider than pastors.

This is an important, serious, personal, and profound book. Although its length and redundancy might hinder its wide circulation and enduring use, no other book speaks this insightfully and directly to the current culture of the pastorate. Minor weaknesses aside, therefore, it should receive wide distribution and discussion. Pastors, seminary professors, and pastors-in-training should read this book. Others should at least become familiar with the central ideas and discuss them with those in ministry. With Tripp, I hope this book fertilizes the conversation regarding the health of our evangelical pastoral culture.

Drew Hunter is the teaching pastor of Zionsville Fellowship in Zionsville, Indiana.