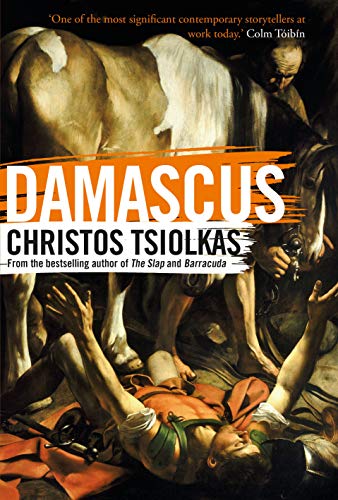 Meet the apostle Paul. But Paul as you’ve never seen him before. A tormented soul, struggling with lust, self-loathing, doubt, and confusion about the return of Yeshua (Jesus) and his kingdom. This is a fictional Paul, not the Paul of standard scholarship. Contemporary Australian novelist, Christos Tsiolkas, by his own declaration, has become intrigued and captivated by the apostle and the beginnings of Christianity amid the darkness, cruelty, and barbarism of the first century Roman Empire. Tsiolkas has remarked that personally he finds Jesus’s words profoundly moving, but cannot call himself a “Christian” because he disbelieves Christ’s resurrection.

Damascus is a disturbing novel that slides, with sly creativity, between the trustworthy witness of the New Testament, the apocryphal Gospel of Thomas, and the author’s engrossing fictional embellishments. (The “Gospel” of Thomas is a non-canonical collection of supposed sayings and parables of Jesus, discovered in 1945. Like Tsiolkas, it doesn’t acknowledge Jesus’s resurrection.)

The book introduces us to an astonishing collection of early Christ-followers. The narrative opens with a young girl whose vicious stoning for adultery is being supervised by the unconverted Saul. There is a Greek woman, Lydia, whose daughter was born deformed and left exposed to die on a hillside. A slave girl who is lasciviously and disgracefully humiliated in the Roman arena before her throat is torn out by a lioness. A young boy from Paul’s own congregation who is dragged into a pagan temple, castrated and has his tongue cut out by the cult priestess. Each takes hope and comfort in Christ despite the terrible pain, filth and distress caused by the brutality of their unbelieving persecutors.

Damascus is a tour de force of imagination. It mingles the powerful gospel themes of forgiveness, resurrection, love, compassion, and inclusion, with doubt, heresy, and legend. It infuses genuine biblical characters with prurient desires and strange compulsions. The young pre-conversion Saul, satiating his lustful desires, visits makeshift brothels under cover of darkness. He fights his same-sex attraction and struggles with sin and shame. After his Damascus road encounter with Jesus, he remains fearful, reluctant and sin-ridden. Yet he courageously perseveres in his newly discovered faith, along with his doubt.

The Paul of the New Testament did not cease to be a Jew; and likewise, Paul the protagonist of Damascus remains a Jew after his conversion. He is cut to the heart, deeply hurt and distressed to be spurned by his Jewish family and exiled from Judaism, his beloved people, and their God-given land. He fears for them in their refusal to acknowledge the Messiah. Tsiolkas, I think, gets this tension right, and there are shades of passages like Romans 9:1–5 in the background here. Through his depiction of the character and emotions of Paul, he makes the point powerfully and poignantly.

At various points in the book, we are presented with strange fictional pastiches of biblical characters. Timothy, Paul’s disciple and protégé, is desperate to be circumcised. Paul, who loves Timothy deeply and probably inappropriately, oscillates between refusing his entreaties and acquiescing. Eventually, as an exhausted old man, Timothy suicides—while still trusting in Jesus. The apostle Thomas is, indeed, a twin – of the Lord Jesus! But he refuses to believe in his brother’s resurrection, despite insisting that he (Thomas) remains an authentic part of the Christian community.

There is much in this novel that will shock readers into realizing how cruelly many early Christians were treated. They are contemptuously called “death worshippers” (p. 196), and a “death cult” (p. 296), and identified as “flesh-eaters and lovers of death” (p. 227). Abel, an early church elder in the narrative, reminds his flock: “Who doesn’t hate us? Who doesn’t want to destroy us? The Romans scorn us, the Greeks despise us, the righteous Jews shun us, and all of the unbaptised laugh at us. There is no tribe that doesn’t slander us with the ugliest gossip and there is no authority that doesn’t want us eliminated” (pp. 329–30).

Warning: this is not an easy book to read. Its heresy and dark imagery make it uncomfortably confronting, and may lead undiscerning readers away from the truth. But is it a good book to read? That depends on why you read it. It’s fiction—strong and disturbing fiction—and hardly a retelling of the New Testament narrative. And yet, many Christians are reading it and even commending it. So it may serve pastors to be forearmed.

Is it edifying literature? On the whole, no. If you want to feel deeply the ostracism, danger, and sometimes terror experienced by persecuted Christians surrounded by pagan idolatry and hostility, as well as savage Jewish resentment, then yes—the book will oblige you: it’s full of gruesome, gritty descriptions and raw emotions which are very likely pretty close to the reality of first century life. As Paul—the genuine Paul—himself wrote, “everyone who wants to live a godly life in Christ Jesus will be persecuted” (2 Tim 3:12).

Yet there are glittering jewels of Christian truth to be discovered: “we don’t need any signs or symbols—no liturgy, no mysteries, no temples, no priests, no sacrifices, no pomp and no idols. All we need is the word of the Lord” (p. 357). And what shines through the muck and misery is the unshakeable trust these early believers have in Jesus; their joyful generosity as Christian slaves, householders and even aristocrats—Jewish, Greek, and Roman—share life together; and their hope and joy in Jesus’s promised return. They’re not sure when he will come to consummate his kingdom and vindicate them, but they know with certainty that he will. Their customary greeting and responsive catchcry throughout the book is heart-warming: “He is coming.… Truly, he is returning!” (pp. 90, 306). And that mixture of suffering, kingdom and patient endurance is the common experience of countless Christians throughout the world today, as it has been in every age.