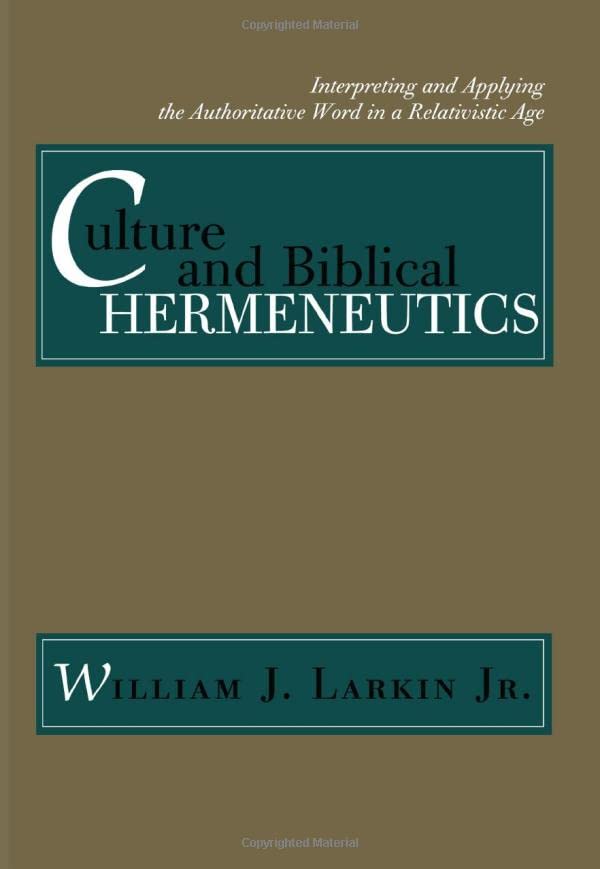 Culture and Biblical Hermeneutics. Interpreting and Applying the Authoritative Word in a Relativistic Age

‘Should I put my academic degree after my name on my business card?’ ‘Should my wife go with head uncovered to church?’ ‘Should my son wear long hair?’ ‘Should I refuse to insist on baptism in my mission work where there is no water available?’ The author, professor of Bible and Greek at Columbia Biblical Seminary and Graduate School of Missions, develops a closely reasoned biblical theology of hermeneutics and culture that enables him to give a confident ‘no’ to each of these questions.

Professor Larkins devotes nearly one-half of his book to developing an historical perspective—how we have reached this stage of historical and cultural relativism in understanding the Bible; how non-evangelical scholars have stated their case; in what ways evangelical scholars have dealt with these same issues; and how evangelical missiologists have related culture and theology and developed their understanding of contextualization.

In the second half of the book the author gives his own understanding and interpretation. Chapter titles indicate the wide range of material included in this section: Culture and Context; Revelation and Truth; Language and Meaning; Scripture and Spirit; The Hermeneutical Bridge; Interpretation, Application, and Contextualization.

The topics with which the author deals are extremely important to both monocultural and bicultural ministries. He has interacted widely with the literature related to these topics and concludes that there is indeed a hermeneutical bridge which enables the interpreter and proclaimer of Scripture to understand the message and to communicate it in any cultural setting. The building blocks for this bridge are human language (meaning is determined in terms of ‘traditional sign theory’); God, who has expressed his truth largely by revealed propositions; an inerrant Scripture; a humanity whose unity is more basic than its cultural diversity; and an historical framework that narrows the distance between an ancient context and the contemporary milieu.

In the last two chapters of the book Professor Larkin applies his methodology to specific passages of Scripture and themes. Normative guidelines are given to help the reader apply to practical issues the principles which the author has elucidated from his theoretical framework. If a person agrees with the theory propounded, then the application follows logically and consistently. This is a thorough treatment of many critical themes, and this book will provide one answer to many evangelicals who are confused by the issues related to the culture of biblical times and to how the Bible can be applied rationally and faithfully to our current cultural scene.

As I read through this fine, irenic volume, I was frustrated occasionally by the author’s organizational principle—to separate his historical material, particularly that of the evangelical writers, from his later, more interpretative chapters. As he approved or criticized fellow scholars, I was always wishing for examples to illustrate what he meant. Larkin usually stated a theory and left me guessing as to what this meant practically. If he could have included more of this evaluation of his colleagues with his own interpretation, it would have helped me immensely to understand precisely where and how he differs from his colleagues.

Larkin is a competent scholar of the biblical text and understands biblical languages and the European languages used in critical biblical scholarship. This book would be even better and have less rigid interpretations if he also had in-depth experience with contrast—American cultures and non-European languages. It is significant to point out that he differs most markedly from Bible translators (I also am one of these) having this background, whether they have been associated with the American Bible Society (Nida, Kraft, Taber, etc.) or with the Summer Institute of Linguistics. His background is limited for writing this encompassing type of book that demands much more serious interdisciplinary interaction with all aspects of meaning and culture.

This leads the author to support his conclusions by referring to scholars who, while their opinions may agree with his, are hardly the most reliable primary-source people for the subject discussed. It also leads to some over-interpretation out of context from quotations from other authors. In claiming that Eugene Nida believes that ‘the Hebrew dbr word group points to event as the medium for biblical revelation’ (p. 23), he does not note that Nida also says that it refers to word or speech.

The author rightly seeks to magnify Scripture as the authoritative Word of God. But does the Bible really speak to the many topics which he brings under his purview? Can we conclude as assuredly as the author that Scripture speaks to the theory of meaning we must adopt and that it is indeed the ‘traditional sign theory’? Other evidence might suggest that the Bible is congenial to several approaches.

He also postulates, as if it were a biblical statment, that ‘form and meaning are both to be taken as norms unless Scripture indicates otherwise’ (p. 314). Might it be more appropriate to deal with specific examples as they arise? In view of the long discussions on relations of form and meaning, it is strange that the author does not deal with Jesus’ command to wash feet. He quotes McQuilkin’s view on this at one point in the text, but that instance counters his thesis by changing a seeming authoritative command to meet the needs of the context (p. 123).

This is a demanding book to read and forces the reader to interact with many subjects. I was disappointed that Professor Larkin tries to tie down every loose end, to make the Bible speak to every conceivable linguistic and cultural option, and never to confess that some problems might have a ‘both—and’ answer. It is necessary to bring biblical hermeneutics to bear not only on relatively small cultural problems, but also on the ‘life-and-death’ issues of our current society which he never mentions—abortion, nuclear proliferation, euthanasia, genetic engineering, poverty, injustice and materialism.