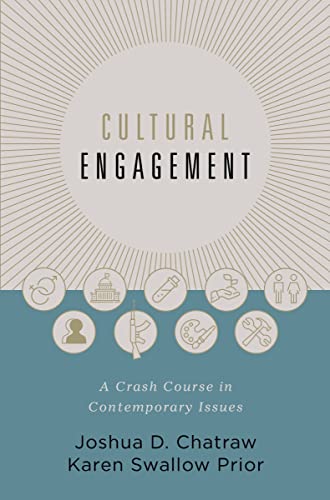 Of making many books about culture, there is no end, and much study wearies the body. So, it was with a degree of trepidation that I ventured into the unknown of this collection of short essays on a wide variety of cultural issues. I need not have feared, however—it ended up being rather brilliant.

Part 1 sets the foundation for how we understand culture and the church’s relationship to culture. The three chapters that comprise this part are worth the price of the whole book. Chatraw and Prior are clearly au fait with a wide variety of authors in this field—Mark Noll, Kevin Vanhoozer, James Hunter, Charles Taylor, Richard Niebuhr, Don Carson, Rod Dreher and Alasdair MacIntyre, amongst others. In fact, this section of the book would be an excellent summary for those who want to understand what these authors are teaching but just don’t have the time to read all their works.

Although Cultural Engagement is scholarly and well researched, it is also immensely practical. This is seen, for example, in part 1 where the issue of frequenting Starbucks is discussed. I read this on the same day that I read about Starbucks funding the Transgender activist group, Mermaids. It genuinely helped in clarifying my thinking and subsequent action.

Perhaps the most important insight in this section is one that is reflected throughout the whole book. After citing James Hunter’s observation that in engaging the world there is no single strategic model for all times and places, Chatraw and Prior state this guiding principle: “Much in cultural engagement hangs on wisdom and virtue rather than a list of rules or universal plan that we might extract from the Bible” (p. 38). They also helpfully recognize that “Cultural issues are complex because each one involves holistic beings living in multifaceted communities with problems that are interconnected” (p. 50).

Part 2 is the substance of the book looking at nine different contemporary issues—each with a number of short (in some cases very short!) essays on the subject. I would have expected that these essays would interact with one another—but it is actually a strength of the book that they don’t. Each author writes from their own perspective on their given subject and (with a couple of exceptions) does not engage with what the others have written. The range of subjects is also fascinating and, in my view, spot on as regards the key issues in our culture: sexuality, gender roles, human life and reproductive technology, immigration and race, creation and creature care, politics, work, arts and war, weapons and capital punishment.

Any collection of essays is going to be of varied quality, and this book is no exception. However, with few exceptions, I found the vast majority of the essays to be thoughtful, well-written, and stimulating.

The first area of discussion, sexuality, was for me the most disappointing—I suspect because it is an area in which I have already done a great deal of reading. The quality was the most varied of any of the sections, from Rosario Butterfield’s “What It Means to Love Our LGBTQ Neighbors,” which should be published as a stand-alone leaflet, to the disappointing “Rethinking Same-Sex Relationships” by Matthew Vines, who sees being opposed to SSM as the modern equivalent to believing that the earth is the center of the universe!

But after that initial section the rest of the discussion subjects are more balanced. All are informative and stimulating. I don’t like reading books that simply confirm what I already think or know. I prefer to be challenged and informed—and indeed even changed. There are a handful of books that have done this for me in the past few years, and this is one of them. I found the essays on in vitro fertilization informative and challenging—to the extent that they changed my mind. Charlie Camosy’s “Reproductive Biotechnology as a Product of Consumerism” was particularly outstanding.

Sometimes there is confusion and inconsistency in some of the essays. For example, Ellen Painter Dollar’s argument—“while I do not consider abortion a morally neutral or a good thing, I support abortion rights” (p. 145)—makes about as much sense as stating that although I don’t think slavery is a good thing, I still support slave-owners’ rights!

Inevitably, with such short essays there is a temptation to revert to oversimplification. For example, in his “Climate Change is a Christian Issue,” Jonathan Moo writes of the way in which biblical Christianity “challenges us to stand with the oppressed, the poor and the weak” (p. 195) before going on to mention the potential for a refugee crisis stemming from climate change but without mentioning the way in which some measures taken to limit climate change adversely impact the poor. Thankfully, this is corrected (inadvertently) a couple of pages later when Timothy Terrell cites the economist Cornelis van Kooten, who controversially declares, “To mitigate climate change one needs to force the vast majority of humankind to continue living in abject poverty. Preventing climate change does not help the poor, it dooms them! Poverty simply kills more people than climate” (p. 199).

One of the advantages of a book with such a large number of essays is that you are introduced to authors you have never heard of. In the section on art, for example, there are two outstanding essays which made me want to read more by their authors. Taylor Worley’s “Encountering God’s Story with the Arts” is beautifully written, somewhat unusual, and immensely helpful. Cap Stewart’s “When Art Becomes Sinful” was so challenging that I now have to go and rethink some of my previous ideas and probably change one of my viewing habits.

The closing section of the book contains a chapter by Chatraw and Prior on “Gospel-Shaped Cultural Engagement” and a final chapter by Andy Crouch on “Creating Culture.” These chapters help to drive home the editors’ conviction “that cultural engagement goes wrong if it’s not grounded in the truth, that creation is simultaneously and intrinsically good, deeply corrupted and in need of redemption” (p. 17).

One aspect of the book that I did not always find helpful was the questions at the end of each section. Far too often they asked, What would author A say to author B? The answer is, I don’t know and I don’t want to second-guess them. The essays are too short to allow that level of knowledge and dissection.

Another slightly frustrating aspect of the book (at least for me) is that it is very Americancentric. This is seen especially when it comes to discussing race, gun control, and politics.

These (minor) criticisms aside, Cultural Engagement is a book that has gone straight to the bookshelf marked “Read again—very useful.” Use it as a textbook and guidebook if you wish to understand the culture in order to engage in cultural evangelism. And remember: “Ultimately, engaging a culture is nothing more—and nothing less—than seeking the truth in order to love with a godly love” (p. 60).