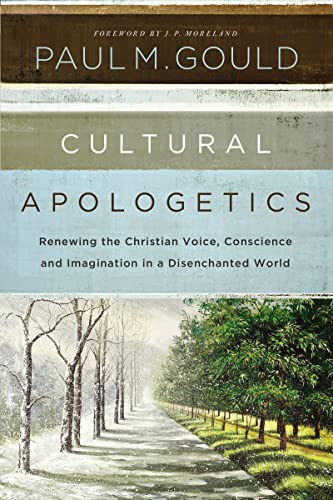 Paul M. Gould’s Cultural Apologetics is a holistic, paradigm-shifting primer on how to faithfully and effectively practice apologetics in the modern, disenchanted Western world. Not only does Western culture currently view Christianity as intellectually unconvincing; it now also regards its teachings as morally repugnant. Traditional models of apologetics rely on intellectual arguments, which according to Gould, are not enough to produce a genuine missionary encounter. What the apologist must practice is not simply intellectual argumentation but cultural apologetics. Apologists must show that Christianity is not only true but that it is good and beautiful. Therefore, they must engage the intellect, imagination, and conscience. Gould argues, “Cultural apologetics must demonstrate not only the truth of Christianity but also its desirability” (p. 25).

Gould’s work functions as a catalyst for a fresh way of approaching apologetics as a whole. He builds upon scripture and voices of the past to lay the foundation for defining cultural apologetics as well as its purpose. Though he now makes a case to practice this holistic form of apologetics in the Western culture, many other apologists have previously defended not only the reasonableness of Christianity but also its beauty and goodness. Most notably, Gould builds upon the apostle Paul’s discourse in Acts 17 and the apologetics of C. S. Lewis.

Through Paul’s Mars Hill discourse, Gould reveals a “helpful model for engaging ‘our Athens’ with the truth, beauty, and goodness of the gospel” (p. 26). As Peter Kreeft has shown, reason, conscience, and the imagination guide the human soul and correspond with the three longings of the human soul: truth, goodness, and beauty. Like the apostle Paul in Athens, “we can utilize the cultural narratives embodied in literature, film, music, and art to build bridges to the gospel” (pp. 26–31).

Gould’s approach to reach “our Athens” is by reenchanting what has been disenchanted. He argues, “While man’s desire for truth, goodness, and beauty has become distorted, the desire remains. Part of our job as cultural apologists is to help reawaken these universal and natural human desires and redirect them toward their proper end” (p. 81). Cultural Apologetics is structured in the following manner. Gould starts with his explanation of disenchantment and the need for reenchantment. He then devotes the remainder of the book to revealing the practical aspects of reenchanting the imagination, reason, and conscience. Meanwhile, he breaks down barriers within the disenchanted to see the truth, beauty, and goodness of the gospel.

According to Gould, the arts are one of the best means for reenchanting the imagination (p. 100). Reenchanting the imagination awakens desire within the individual, which then leads one to return to reality (p. 113). Thus, the cultural apologist not only shows that the gospel is desirable but also that it is plausible (p. 124). Gould pursues this goal in two ways. First, he denigrates the strain of anti-intellectualism prevalent in the Western church today. Second, he presents some of the rational arguments classically used in apologetics (p. 143). In his explanation of reenchanting the conscience, he dwells on beauty, revealing beauty as a central component within the biblical narrative. He presents the need for Christians to be the “cultivators of the good, true, and beautiful” (p. 146).

In what way does this book offer a paradigm shift? Put simply, it explicitly contends for an apologetic of desirability, which posits engaging the imagination along with the intellect and conscience. Certainly, faithful apologists and theologians have done this very thing for many years. Most notably, C. S. Lewis, quoted throughout the book, famously engaged people’s imaginations as well as their intellect when writing works of fiction. Frederick Buechner, Os Guinness, James K. A. Smith, and others who have sought to engage the world with the desirability of Christianity are also given a fair representation of Gould’s approach. Inexplicably, Francis Schaeffer, who seems to be as much a cultural apologist as Lewis (minus the fiction literature), is rarely mentioned. Including Schaeffer could have added great value in explaining how to engage the conscience and imagination without being a fiction writer or artist.

What makes Gould’s Cultural Apologetics an important work is that it combines truths from the library of apologetics literature already available and then uses them cohesively and holistically to draw people to the gospel. While this book is a worthy primer into cultural apologetics, it has limitations. For example, Gould’s Cultural Apologetics never dives very deep into its various subjects. It sometimes fails to present adequate explanation and argumentation due to its broad scope. He gives surface level and short explanations because he must deal with the next point. Therefore, the book sometimes omits objections to his arguments or else does not handle them fully. To be fair, Gould’s intent is not to create an exhaustive guide to cultural apologetics but rather an overview.

With the nitpicking aside, Paul Gould’s Cultural Apologetics is a significant publication in the field of apologetics. The core premise rings true and is necessary in this modern Western culture. Any apologetic that does not deal with intellect, conscience, and imagination is an incomplete apologetic. There is a need for much more work in the field of cultural apologetics, and further studies will be indebted to Gould.