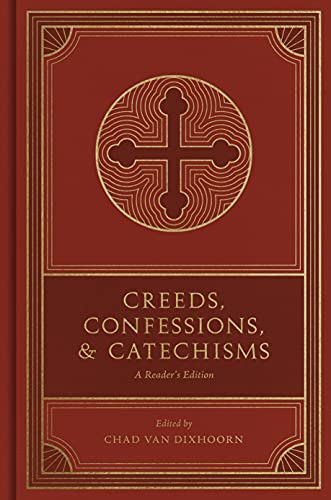 Cuban-American historical theologian Justo González has rightly stressed the significance of the past to understand oneself and the Christian faith: “Without understanding the past, we are unable to understand ourselves, for in a sense the past still lives in us and influences who we are and how we understand the Christian message” (The Story of Christianity, Volume 1: The Early Church to the Reformation [New York: Harper Collins, 2014], 3). Creeds and confessions are vital to this process. Historically, the church has utilized creeds and confessions to summarize and express the essential teachings of Scripture and church practice. These works have helped shape the identity of the church for generations and continue to serve as foundational guides for believers around the world. Creeds, Confessions, and Catechisms: A Reader’s Edition gathers thirteen of these historic statements of faith—including the Apostles’ Creed, the Nicene Creed, and the Westminster Catechism—in one beautifully bound volume. The editor gives a short introduction to each text, explaining its background and significance for the church. This volume offers the reader the opportunity to delve into these time-honored articles of the faith in a fresh way.

This volume aptly fits with Van Dixhoorn’s Reformed interests in its inclusion of four early ecumenical creeds (The Apostles’ Creed, Nicene Creed, Athanasian Creed, and Chalcedonian Definition) and nine Reformed texts (Augsburg Confession, Belgic Confession, The 39 Articles, Canons of Dort, Westminster Confession of Faith, and the London Baptist Confession). The author acknowledges this bent in his introduction: “The confessions and catechisms that follow are particularly significant texts in Protestant history. These are defining documents for Lutherans, Anglicans, the Dutch Reformed, Presbyterians, and Baptists. Sometimes with slight adjustments, they have been used by any millions of Christians” (p. 9). Van Dixhoorn begins each text with a succinct, well-written introduction that gives an overview of its origin, historical context, and relevance. The reference work has sparse footnotes but includes helpful general and Scripture indexes.

While the title suggests a more general reference work, this volume might be better subtitled A Reformed Reader’s Edition due to its focus on texts specifically relevant to Protestant Reformed communities. The inclusion of updated English versions of the thirteen statements makes this work very accessible. While it is not always clear what revisions the editor has made to each text, the copyright information includes important details about the sources from which they were drawn. A few of the notable editorial decisions are apparent in the Apostles’ Creed, Nicene Creed, and the Chalcedonian Definition. In the first of these, the editor employs a Trinitarian structure, indenting the lines below the broad belief statements regarding the Father, Jesus Christ, and the Holy Spirit and using the updated language of “Holy Spirit” rather than “Holy Ghost.” Van Dixhoorn also includes a footnote explaining the meaning of “catholic” as referring to universal but, interestingly enough, does not note the possible meanings of the ambiguous phrase “he descended into hell.” Without changing the title of the Nicene Creed to Nicene-Constantinopolitan Creed, the reference work includes the substantial changes made in 381 to the 325 version regarding the Holy Spirit, particularly the inclusion of the filioque clause, which has been a source of division between the Catholic and Orthodox traditions. The text includes the truncated version of the Chalcedonian Definition, which was often used for recitation in services, rather than the full text, which is about five pages longer. These editorial choices make sense for the target audience. If an individual is looking for a more ecumenical reference work, this may not be sufficient; but for a very accessible introduction to significant statements of faith for the Protestant tradition, this is a great place to start. This volume offers a handsome embossed cover, thick pages, easy-to-read font, and even a ribbon to mark your place in the book, making it a wonderful gift for anyone interested in this collection of statements of faith.

Creeds, Confessions, and Catechisms: A Reader’s Edition is best suited for Protestant readers, specifically graduate/seminary students, pastors, and churches looking for a manageable reference work covering the foundational statements for the Reformed community. In light of its Reformed focus, it might be better subtitled A Reformed Edition since it does not include texts for Catholic or non-Reformed Protestant communities apart from the four early church creeds and the Augsburg Confession. It would be helpful to have a second volume that includes a broader selection of Protestant statements. But Crossway, as they are known to do, has taken care to publish a high-quality resource that will stand the test of time. This volume will help individuals and communities that want to understand the essential teachings and practices of the Protestant faith.