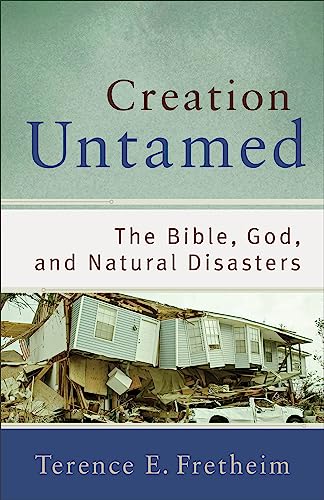 The press cites Christian leaders on three topics: sex, money, and so-called biblical perspectives on natural disasters. In spite of the fact that this volume is part of a larger series entitled “Theological Explorations for the Church Catholic,” the central premise of this book is quite controversial, and there is little evidence that it is based on doctrine held by the Christian church throughout the centuries. Many ideas echo process theology and open theism. At the heart of this book is the argument that natural disasters were an “integral part of creation before human beings showed up” (p. 3). This short book covers a wide range of material including creation, providence, prayer, the book of Job, Psalms, and the Genesis flood story.

There are several commendable aspects about this volume. Readers will appreciate the care that Fretheim takes in consistently doing exegesis and exposition before theology. Key ideas are repeated throughout for the sake of clarity, and the volume is not encumbered by technical jargon or excessive footnotes. Despite the controversial nature, many will agree with Fretheim’s concern that Christian leaders often link specific natural disasters with sinners. There is no doubt that work needs to be on the topic of divine judgment and creation theology. I heartily agree with Fretheim’s call to work hard on this matter!

In Fretheim’s model, God makes a decision to allow creation itself to be a co-creator. Creation has a role in creating itself! (p. 11). The world is eternally becoming in similar fashion to process theology. The world (even mud) takes on the status as a “non-human creature” (p. 22). Creation itself is given freedom and non-human creatures are released from “tight divine control” (p. 16). God does not unilaterally control creation but has partnered with it (p. 17). The creator is not, as Fretheim explains, “external” to creation (p. 24). This differs significantly from orthodox Christian doctrine because the world is both creator and creature. In this model, it is very difficult to tell the difference between creation and God. The nature of creation is so open and radically free that Fretheim suggests that God has made “false starts,” “failures,” and “embarrassments” (p. 21). And if suffering and disasters are “good” and “necessary” (p. 154), it is not clear that there will ever be a time when this will change.

All creatures are called to participate in this process of the “becoming of creation” (p. 15). Because God and the earth are co-creators, God and the earth are “ever in the process of becoming” (pp. 14, 26). The earth is a “dynamic reality” (p. 14) that is continually in process. Randomness and chaos reflect the “goodness” of the earth because they reflect growth and potential for development. Fretheim connects this model to open theism by stating, “God creates a dynamic world in which the future is open to a number of possibilities” (p. 17). This is unique because humans and non-human creatures are characterized by libertarian freedom.

The evidence marshaled forth to support this claim is that the command to “subdue” the earth (Gen 1:28) is given before the fall. Fretheim provides a non-technical exegesis of the use of “good” and “very good” in Gen 1–2. From a macro-level perspective, Fretheim places too much weight on semantics without giving appropriate consideration to narrative elements. Fretheim concludes that if the earth was evaluated as both “good” and in need of being subdued, then the earth was not finished and natural disasters are an integral part of the earth process of growth and change. The problem with his proposal is that it is myopic and virtually ignores the presence of the Garden of Eden and the Fall. This proposal also raises questions about the nature of God. If the chaos of creation is intrinsically good, does this mean that God’s nature is also characterized by chaos?

There are two other macro-level problems that stand out. First (despite Fretheim’s obvious erudition and mastery of Semitic languages), this particular proposal is based in large-part on a fallacious non sequitur argument. Specifically, it does not follow that a model of creation that is based God’s total sovereignty eliminates responsibility from creatures (pp. 10, 37). God’s sovereignty does not demand fatalism. Second, there is little engagement with the doctrine of Christ as creator. There is an engaging Christ-centered examination of the cross and suffering but little about Jesus’ role as the creator and sustainer of the cosmos. Hopefully this is one of the last spasms of open-theism literature. Unfortunately, Fretheim does not address any of the existing literature that critiques models of God and creation that are similar to his.