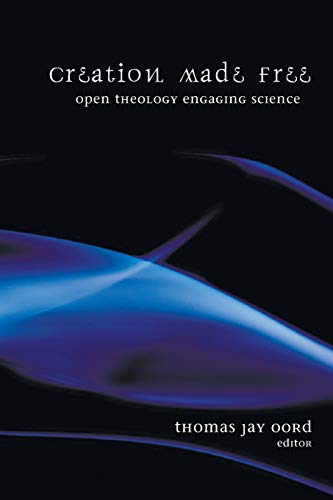 Over the past few decades open theism has grown from a loose idea into a full-blown movement within evangelical theology. Most of the discussions to date among open theists have focused on critiques of classical theism, the problem of evil, the doctrines of omniscience and providence, and the need to distinguish itself from other related movements (e.g., process theism). In more recent times, open theists have come to realize that a robust and adequate conception of God and the God-world relationship must go beyond these issues-important as they are-and begin to develop connections with contemporary science. In 2007 a three-week seminar was convened at the Eastern Nazarene College to focus on the relationship between Open theology and science. The participants met again in 2008 at Azusa Pacific University to further discuss their work. Oord explains that this was the first time that the leading scholars in the Open theology movement were able to come together for extended conversation. These meetings eventually led to the present volume and a companion volume called God in an Open Universe, edited by William Hasker, Thomas Jay Oord, and Dean Zimmerman (see my review in this issue). The present volume focuses on the relationship between open theism and science in four broad areas: (1) creation and cosmology, (2) evolution, (3) divine knowledge, and (4) humanity.

It would be better if the subtitle of the book were instead Some Open Theists Kind of Engage with Science. I say this for two reasons. First, I say “Some Open Theists” because several of the authors are panentheists or are so deeply indebted to process theology that it is hard to distinguish them from a Whitehead or a Hartshorne. If open theists truly wish to distinguish themselves from these movements, it seems rather odd to include papers like this in a volume on Open theology. Also, there are papers like Alan Padgett's. Padgett offers an account of foreknowledge that is intentionally distinct from traditional and open theology accounts (p. 176). Again, this is odd for a book on Open theology. Second, I say “Kind of Engage with Science” because several of the papers either do not engage with science at all or do so in the most surface-level way. For instance, part one contains five essays on creation and cosmology. Only one actually engages with science, while another discusses biblical issues relevant for science and religion dialogues. Given the space limitations of this review and the lack of scientific engagement from several of the papers, I will focus on the papers that actually engage with science or at least have meaningful implications for theological engagement with science. Some of the papers that do not engage with science are quite good, but they seem oddly placed in a book on theology engaging science.

Karen Strand Winslow's “The Earth is Not a Planet” closely exegetes the creation story in Genesis and argues that it presents the creation of land and sky, but not a planet and other galaxies. The significance of this for science and theology is that one cannot force contemporary scientific understandings into a biblical text that knows nothing of such things. Instead one must come to see what questions the biblical text is trying to address.

Craig Boyd's “The Goodness of Creation and the Openness of God” argues against young earth creationist notions of a perfect creation made only a few thousand years ago. Apart from the claims of contemporary science that the universe and earth are significantly older, Boyd offers biblical and philosophical arguments against this view. Part of the argument involves distinguishing several types of perfection: ontological, aesthetic, and moral. On Boyd's interpretation Genesis does not declare that creation is morally perfect.

Greg Boyd's “Evolution as Cosmic Warfare: A Biblical Perspective on Satan and Natural Evil” deals with the problem of natural evil as found in biological evolution. Why is evolution such a wasteful process, and why is nature so violent? Boyd's answer builds off of an interpretation of Genesis like Winslow's, and his own previous work on theodicy and the Christus Victor theory of atonement.

Nothing in these three papers seriously engages with science, but the issues dealt with have clear and important implications for dialogues between science and theology. What is important to note is that the arguments and claims of these papers are not necessarily unique to open theism. For instance, a Calvinist can agree with a Christus Victor theory of atonement, and any broadly classical theologian can affirm the interpretation of Genesis that is offered.

Thomas Jay Oord's “An Open Theology Doctrine of Creation and Solution to the Problem of Evil” examines several possible cosmological models that are currently on offer in contemporary science. He argues that open theists need not hold to creatio ex nihilo. Instead Oord claims that they should hold that God always exists with a creation of some sort because by nature God is always creating. He also holds that, necessarily, since God is love he must give “freedom and agency to all creaturely entities.” Further, “God cannot fail to offer, withdraw or overcome divinely-given freedom and agency” (p. 52). Somehow all of this is supposed to be an entailment from “God is love.” It is not clear to me how this God is free or able to overcome evil.

Clark Pinnock's “Evangelical Theology after Darwin” is a good example of a surface-level engagement with science. His paper reads like a sermon-and a well-written one at that. It offers no technical discussion of evolution, but instead dismantles common misunderstandings about theology and evolution and gently tries to assure evangelicals that they need not be bothered by evolution.

Alan Rhoda's “Beyond the Chess Master Analogy: Game Theory and Divine Providence” critiques several open theist models of providence before offering his own built on game theory. I have been impressed with Rhoda's previous work, and this essay confirmed in my mind that Rhoda is a force to be reckoned with. He brings a clarity and sophistication to his articulation of open theism that is much needed. On Rhoda's account God is not an irresponsible risk-taker. Instead, God knows all possible worlds since such possibilities follow from either God's nature or will. It is the case that God does not know which future possibilities will in fact be realized, but God's knowledge entails having an exhaustive contingency plan. Rhoda ends his paper by considering reasons that God might create a world and play the game, and he critiques Calvinist and Molinist accounts of providence. Calvinists, he says, offer a risk-free game since God ordains everything, but the players in the game are not in fact genuine players since they are determined. A Calvinist will respond that God creates in order to bring glory to himself. But, Rhoda asks, didn't God already have all of the glory? Molinists have genuine players since God does not determine everything, but Rhoda wonders why God might create at all. Wouldn't a God with middle knowledge be satisfied with a virtual world? It seems to me that the Molinist has a ready reply to this question. She can say that God's knowledge is exhaustive de dicto but in creating a world God gains knowledge de re (knowledge by acquaintance) of the creatures that he has created. God can't have this intimate type of knowledge with non-existent creatures in a virtual world.

Richard Rice's “The Final Form of Love: The Science of Forgiveness and the Openness of God” looks at forgiveness studies in the social sciences, therapy, politics, and theology. He clearly articulates how the concept of forgiveness is understood in each of these areas of study. Rice ends his paper by arguing that open theism can best account for the findings of these disciplines as well as offer a correction to some of their claims. It is not clear to me how open theism accomplishes such a thing. Rice's claims in this section of his paper are claims that just about any Christian theologian can make save for one: “God takes risks.” For Rice, the open future and God's risky behavior make it possible for God to bring about true loving forgiveness and the hope of a genuine transformation of human persons. But, contra Rice, for God to be a God of love and forgiveness who offers hope to human persons, he need not be a God who takes risks, nor does the future need to be open in the sense that open theists claim it is.

As a whole, the book contains an unfortunate number of typos, missing words, repetition of words, and the like. It also contains an unfortunate number of bald assertions that open theism simply fits better with science than classical theism. This is a claim I often see with panentheists and process theists as well. Very rarely does one find an actual argument offered as to why classical theology cannot fit with contemporary science. Especially since the claims of relativity theory are often held by contemporary defenders of classical theology to bolster their position and cut against the open theist's views. It seems to me that several of the papers in this volume should have been cut to make room for the papers in the companion volume. Most of the papers in the companion volume offer a serious engagement with science. It would have been nice if the two volumes could have been compiled as one.