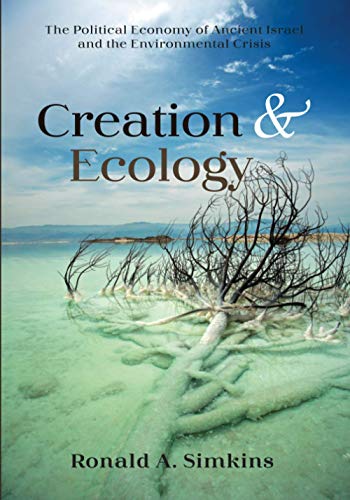 Creation and Ecology: The Political Economy of Ancient Israel and the Environmental Crisis

This is the magnum opus of Ronald Simkins, a professor at Creighton University who has focused on creation in the Old Testament during his eclectic career. Building on earlier work in Creator and Creation: Nature in the Worldview of Ancient Israel (Peabody, MA: Hendrickson, 1994), Creation and Ecology advocates the OT’s vision of subsistence economics as a better alternative to the free-market capitalism which is undergirded by fossil-fuel consumption and has ravaged the natural world. The result is the most wide-ranging treatment of creation care alongside modern economic theory yet available (the bibliography is more than forty pages and contains more than five hundred works). Simkins’s thesis that “the central cause of the environmental crisis is how we humans have mediated the relationship between society and nature, and this meditation is all about political economy” (p. 1) is supported by abundant scientific data that should persuade most (apart from strident climate-change skeptics). However, his contention that OT economics provides biblical solutions for the environmental crisis is less convincing due to a lack of clarity on theological and methodological matters.

Simkins’s stimulating book falls into two parts—on creation and ecology (mirroring the title). Following an introduction on conflicts between Christian faith and science (especially among “conservative Christians,” whom Simkins equates with “evangelicals”), part 1 explores ancient Israel’s economy in light of OT creation traditions. These chapters are divided into studies of Creation and Gender (ch. 1), Creation and Political Economy (ch. 2), Creation and Society (ch. 3), and Creation and the Body (ch. 4) which often address the same biblical texts and themes from different angles. Part 2 continues this topical approach with Ecology and Religion (ch. 5), Ecology and Political Economy (ch. 6), Ecology and the Anthropocene (ch. 7), and Ecology and Theodicy (ch. 8). The conclusion takes a pessimistic turn (its subtitle is “This Is the Way the World Ends”) by framing modern society’s collapse due to climate change as nearly unavoidable. Since “climate change is the result of human sin” (p. 300), Simkins closes with a summons to lamentation and repentance which juxtaposes the possibility of averting disaster with the inevitability that disaster will come, much like the complexity of the OT’s own witness.

As evidenced from the repetition of wording in chapter titles, the book has an iterative structure that leads to substantial overlap between Parts 1 and 2 as well as the chapters within them. For this reason, a deeper dive into the sections on Creation and Society (ch. 3) and Ecology and the Anthropocene (ch. 7) will be representative of the work as a whole. The former chapter traces the rise of kingship in ancient Israel and how the Davidic dynasty used familial language (e.g., “house of David”) to reorganize economic production around itself rather than clan-based subsistence agriculture (pp. 92–93; cf. 1 Sam 8:11–17; 1 Kgs 4–5). This historical transition is well-attested in the OT prophetic criticism of its excesses. However, Simkins also relies on debatable reconstructions of the Yahwist creation myth (Gen 2) and Deuteronomy’s “law of the king” (Deut 17:14–20) as texts supposedly coinciding with a political agenda to shift the loyalty of the Israelite paterfamilias away from tribal affiliations and toward kings as quasi-family members (pp. 94–105). By contrast, the post-exilic Priestly source (e.g., Gen 1) would reemphasize traditional kinship structures as hedges against both hierarchical economics as well as Persian interference in Yehud (pp. 105–15). The substance of Simkins’s argument for non-exploitative, sustainable economics could have come from the canonical shape of the OT without recourse to a JEDP-like framework that no longer commands a consensus even among critical scholars.

The analysis of Ecology and the Anthropocene (ch. 7) is similar. Drawing on wide reading, Simkins maintains that capitalism’s intrinsic need for growth has steered humanity toward an instrumental subject-object relationship to nature with devastating effects (e.g., rising CO2 levels, decreasing biodiversity, rampant pollution). What is emerging is the geological age of the Anthropocene—a human-wrought end to the favorable conditions of the Holocene that began 11,700 years ago. Simkins fingers capitalism’s insatiability as the reason:

Capitalism in the form of the fossil economy, beginning around 1800 with the invention of the steam engine, enabled something never before seen on planet Earth: self-sustaining growth, which soon translated into an economy that experienced sustained per capita growth.… In creating self-sustaining economic growth, capitalist relations have depleted material resources, polluted environments, and have released billions of tonnes of carbon dioxide into the atmosphere by burning fossil fuels without limits, and all in the pursuit of endless accumulation. (p. 239)

As earlier, Simkins concludes by advocating the OT’s vision of human flourishing within the God-given boundaries of creation. He finds that the Yahwist’s theme of human fallibility (as in the Fall and Flood narratives) and the Priestly source’s emphasis on human limitations (as in the Noahic covenant of Gen 9) stand opposed to capitalism’s vision of growth without end. The rubrics of “fallibility” and “limitations” are inseparable, however, as Simkins inadvertently shows in identifying the Babel narrative in Genesis 11 (typically reckoned to post-exilic P due to its references to “Babel/Babylon”) as a polemic about both “human fallibility” (p. 262) and “the limits of human technology” (p. 263).

Creation and Ecology is a seminal but imperfect book on an urgent topic. It is unfair to expect more from a work of already unprecedented scope, but several basic questions remain unanswered: (1) Has “capitalism” become for Simkins a convenient but anachronistic catch-all for a host of vices that are less ambiguous (e.g., colonialism, consumerism)? (2) How would Simkins respond to apologists who defend capitalism on biblical grounds (e.g., the Acton Institute)? (3) In light of global population growth and modernization, is it realistic to turn back the clock to subsistence lifestyles? (4) How does Adam Smith’s concept of the “invisible hand” already provide a theocentric check on greed and inequality? (5) To what extent does the NT transform the OT’s creation traditions so that they cannot be straightforwardly principlized for Christians (not to mention the world at large)? These issues underscore the challenges of integrating theology and economics in the ambitious manner attempted by Simkins.